Newspaper print clothing is back thanks to Carrie Bradshaw

Some outfits need no introductions, and Carrie Bradshaw's iconic newspaper dress is definitely one of them.

Sex and the City was the ultimate in TV viewing for a whole generation of women. Two decades later and it’s still regularly referenced in pop culture – be that for Samantha’s iconic one-liners, the sex, or, of course, the fashion. Ask people why they love it so and it’s probably a combination of all three.

Newly back in the zeitgeist thanks to And Just Like That, the world’s focus has returned to Carrie Bradshaw and her wardrobe once again… and there are few looks as memorable as the famous Christian Dior dress she wore on a lunch date with Big’s wife Natasha (she later re-wore it in the second SATC movie too, but we won’t talk about that).

Designed by John Galliano for the French fashion house, the dress’s meaning was actually much more nuanced than we realised and probably wasn’t the best choice for a meeting with a woman whose marriage you had ruined. “The Dior newsprint dress has a sordid history befitting #F*ckingCarrie,” the @everyoutfitonsatc Instagram account explained alongside a photo of Ms Bradshaw wearing the dress in question. “Galliano lifted the idea from a brilliant 1935 Elsa Schiaparelli print comprised of her own press clippings. The ‘Christian Dior Daily’ print debuted during the infamous ‘Hobo Chic’ couture collection of 2000. Galliano was inspired by the homeless people that he saw on the streets of Paris, presumably at 3 am during a Moët and coke-fueled bender. He also drew inspiration from Tramp Balls, which were essentially lavish 1920s-30s-era parties where Parisian socialites dressed up like poor people for fun.

“The show enraged critics and inspired the unforgettable ‘Derelicte’ collection in Zoolander. Not fully satisfied with his flagrant aestheticisation of poverty, Galliano reworked the newsprint theme into his next Ready-to-Wear show and this dress was born. So, if you thought that Carrie was an insensitive b*tch for stalking Natasha and ruining her marriage and lunch, remember that she is also a heartless b*tch for appropriating destitution.”

Who knew?! But as they say: “this dress is, and always be, everything”… which is why so many of us have lusted after it over the years. Many a high-street retailer has come out with a version of it in the years that followed, most recently Zara who just released their own take on the classic.

Below are a few of our favourite newspaper print looks out there currently. 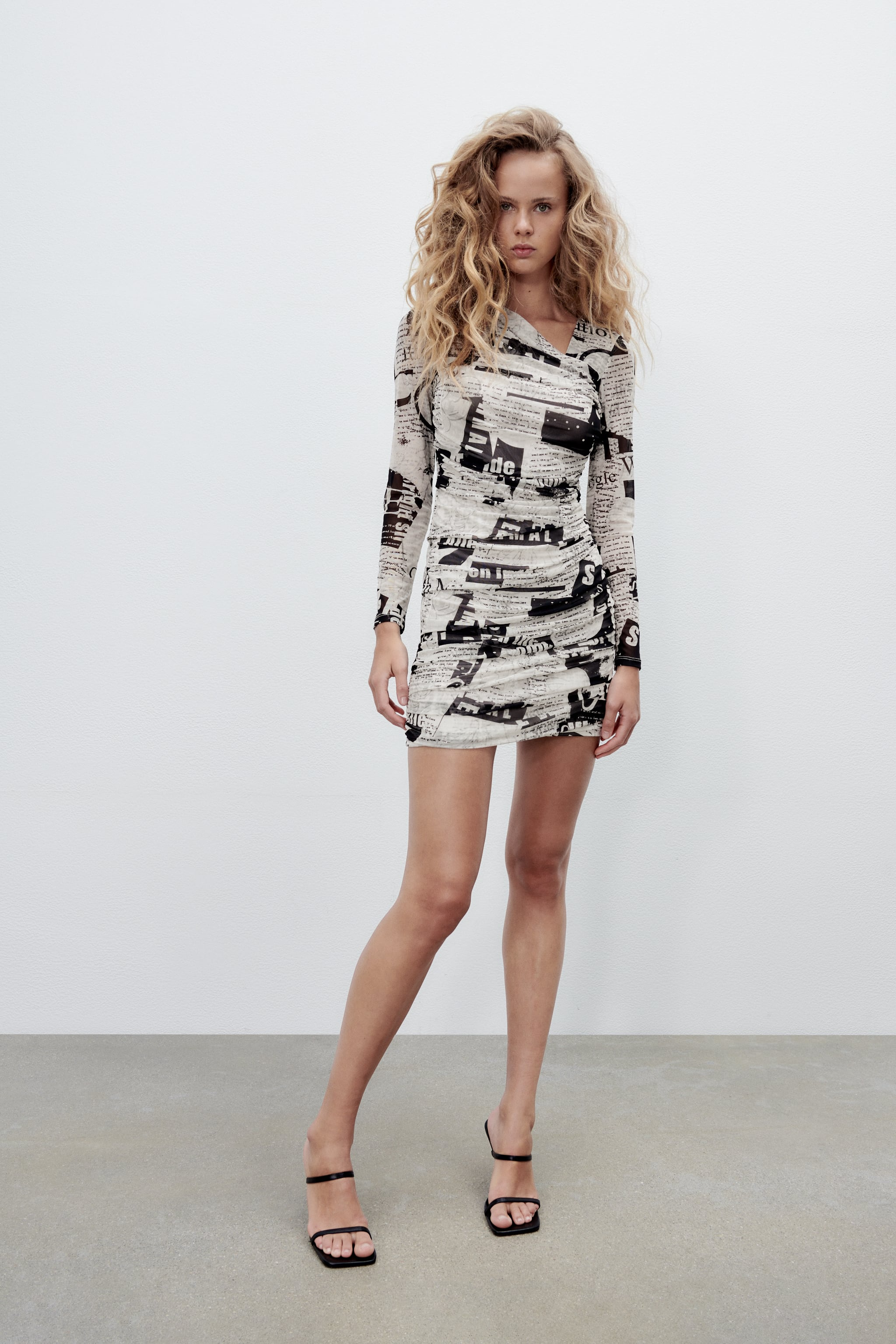 Capitalising on the renewed global love for all things Carrie Bradshaw, Zara has just come out with its own take on the classic look. Featuring an asymmetric neckline and long sleeves, the draped fabric is very flattering too. All you need is a cosmo and some fabulous shoes to complete the look. 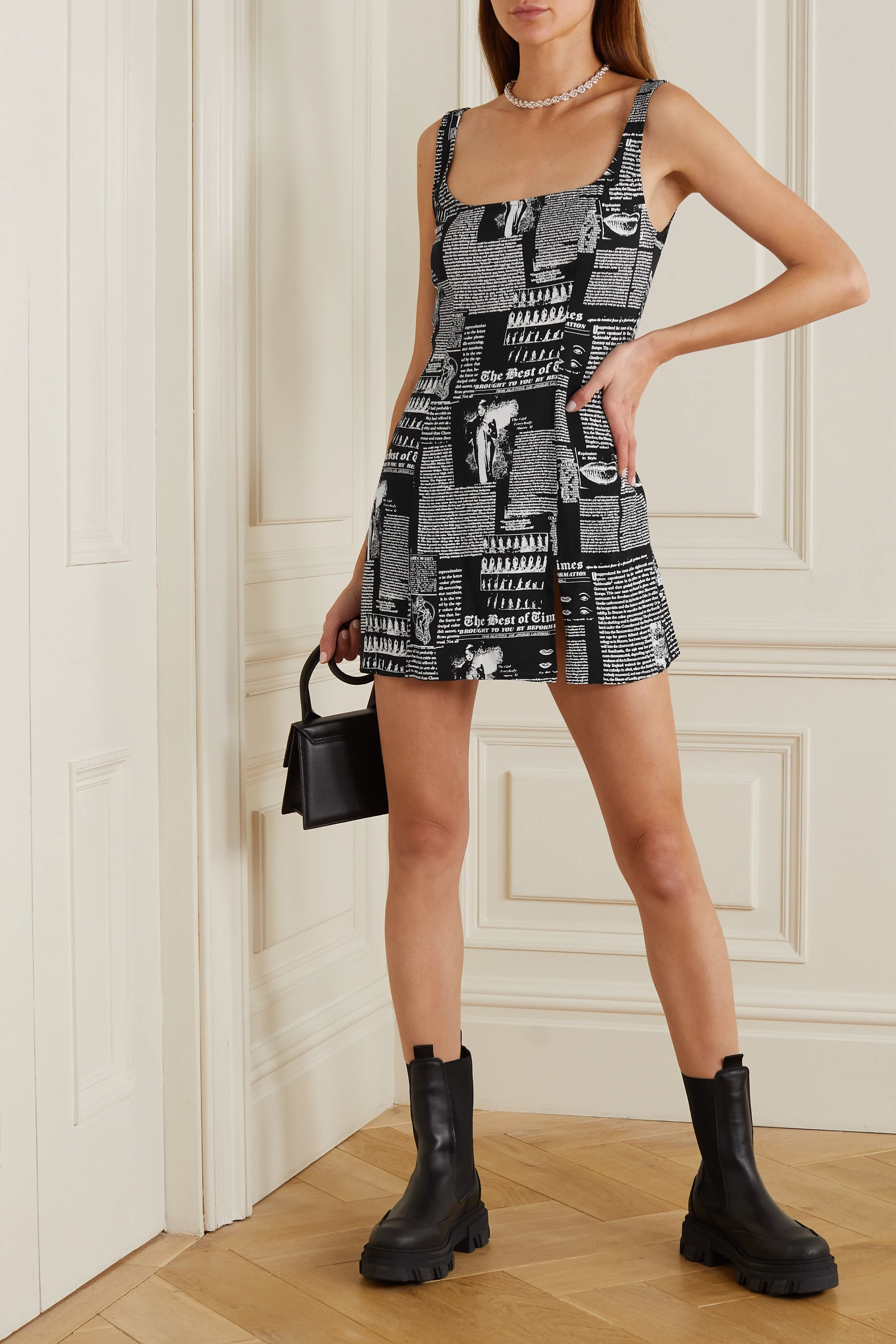 Similar and yet not quite the same, this black number pays homage to the iconic John Galliano dress Carrie once wore. Decorated with newsprint and images of original 20s It-girl Josephine Baker, the gúna itself is made from crepe and has a fit-and-flare silhouette that makes it very easy to dress up or down. 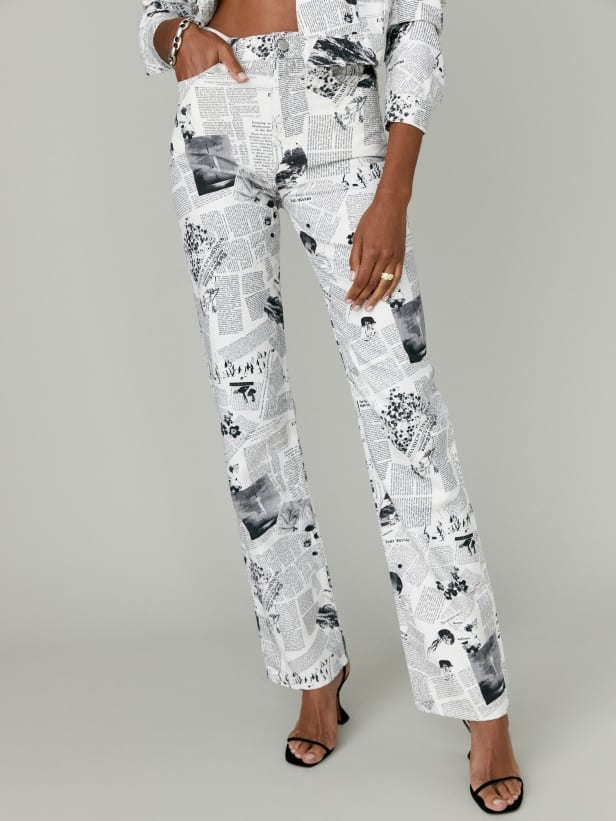 Jeans are a staple in any wardrobe. They work because they’re versatile and you can match them with just about any top, cardigan and jacket you own – the outfit combinations are endless. Sometimes the standard blue or black denim can get a little boring though, which is where this newsprint pair from Reformation will help to spice things up a bit. Wear them with coordinating colours or make a statement with a pop of colour or a clashing pattern… the choice is yours. 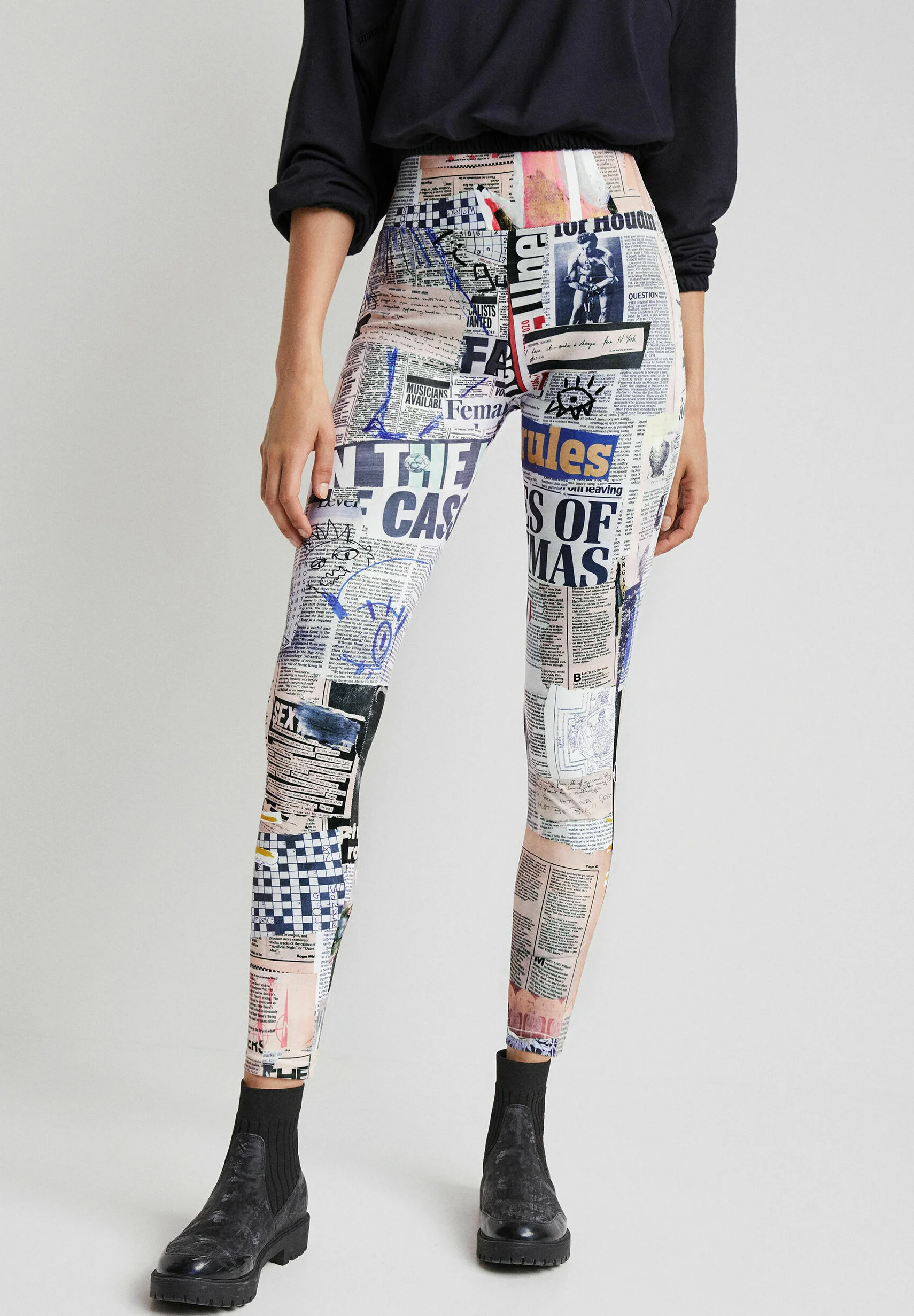 If a completely monochrome look doesn’t sound like you, then this slightly more colourful pair of leggings from Desigual might be. The high cut and thick waistband make them super comfortable, while the quirky doodles and scribbles mean that they’re also very unique. Resisting the urge to fill in the crossword puzzle on the leg would probably prove too difficult though, let’s be honest… 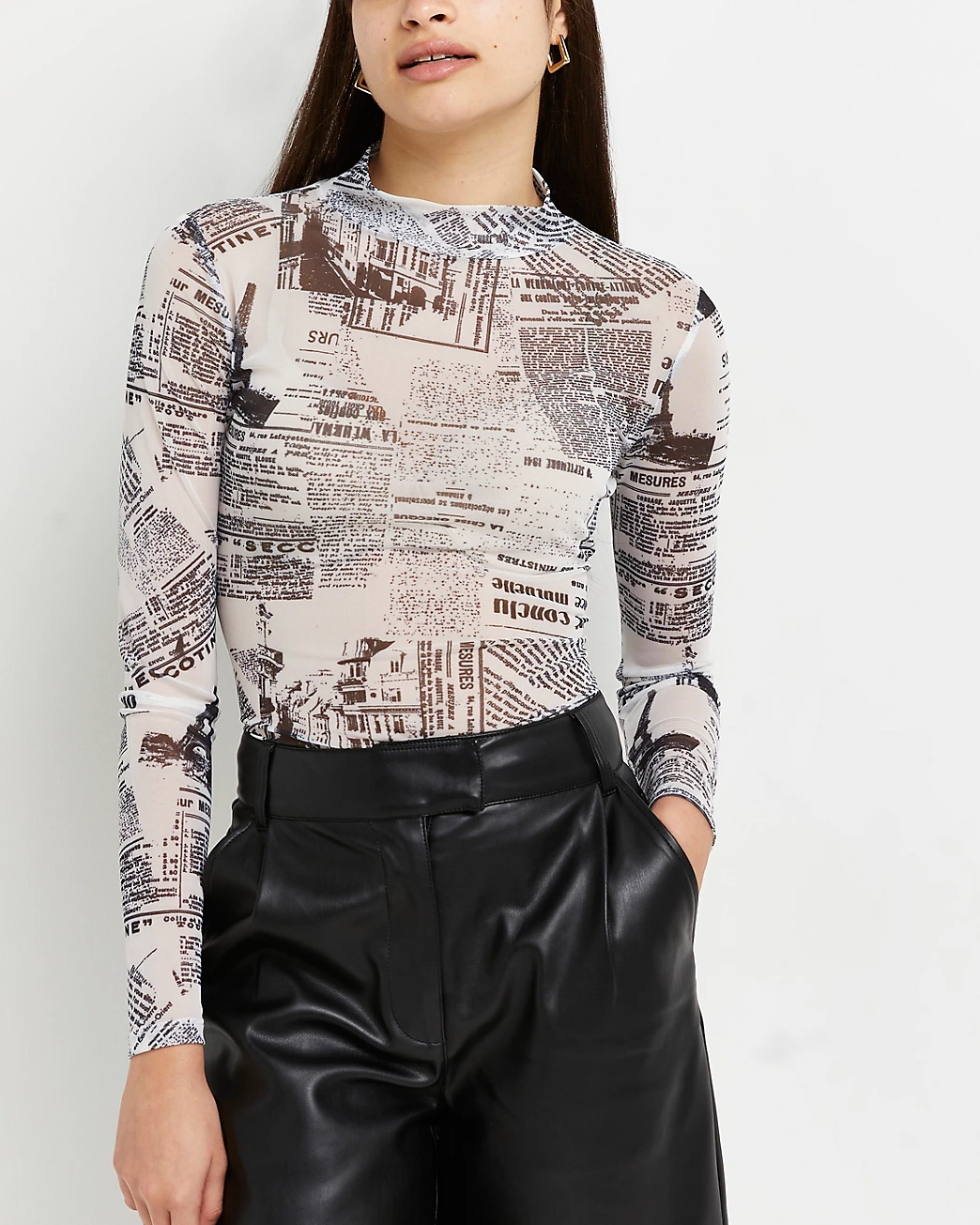 Sheer tops may not be the most practical of choices if dressing for the weather, but sometimes fashion means sacrificing on comfort. For daytime wear, layering is your friend – pop it on under a sweater vest, short sleeve top or cardigan for warmth. For nighttime, pair it with a blazer or a dressier button-up vest and add some red lipstick for a very Taylor Swift in her Reputation era look. 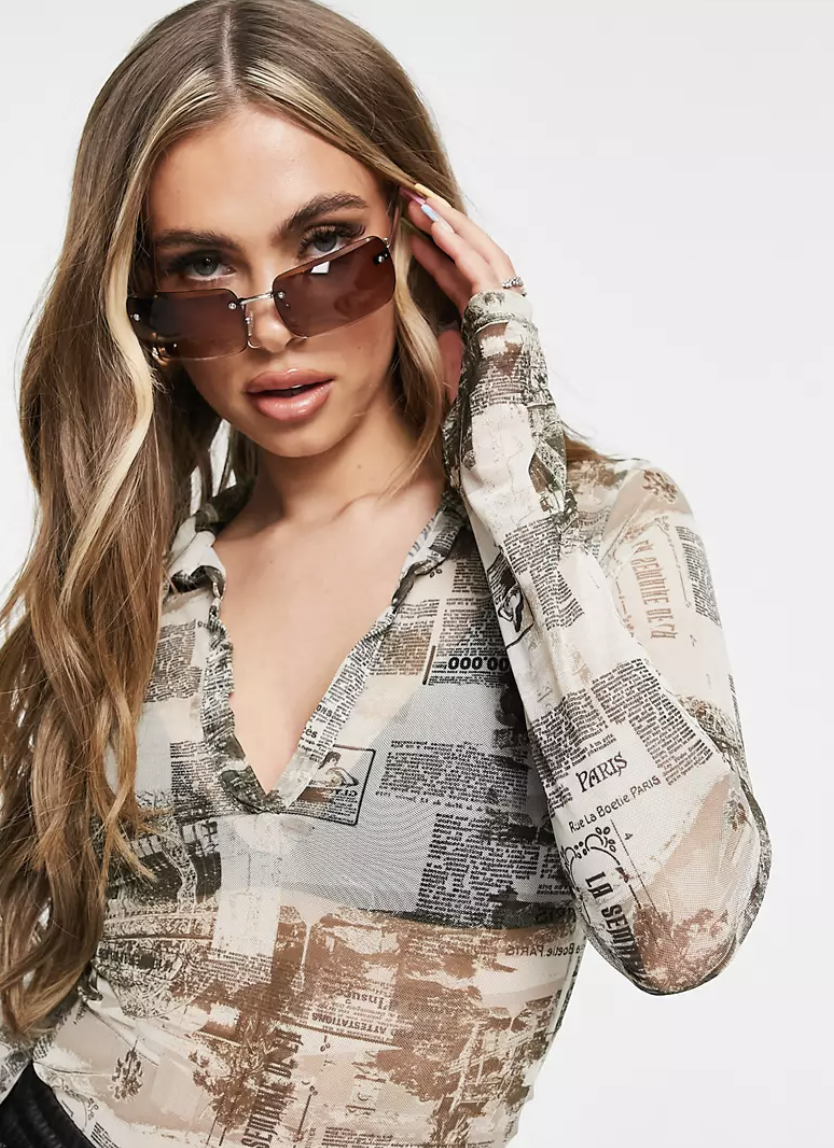 There’s something about a collared shirt that just immediately makes you look like you mean business. Put one on and it really seems like you have your life together, which is exactly why we love this ASOS version so much – it gives the impression that you’ve made an effort when all you really did was throw on a nice top. So your makeup may take an age to perfect, but deciding on an outfit won’t… the ideal choice for people who text “on the way” when they haven’t even left the house yet.

We may earn a commission if you buy something from any affiliate links on our site. Photography via @oenone and @hoskelsa

24 beautiful summer dresses you can rent for under €125

Shop our edit and prepare to fall hook, line and sinker for fisherman sandals