Kiki Na: statement jewellery that drapes icons around your neck

Founded by Dublin born artist Ciarna Pham, Kiki Na design is colourful, striking, sharp; and most importantly, it’s fun. When Ciarna first began designing pieces, she had just moved back to a recession-ridden Dublin with her husband after living in Vietnam. She was unemployed and needed something to occupy her time, so she started making jewellery. “My sister bought me a pair of Frida Kahlo earrings on holiday, and I really loved them, so I started messing around with images and making jewellery myself”.

Ciarna started making jewellery to sell at flea markets around Dublin, which progressed to setting up her own business and website to sell her wares. She now stocks in Dublin’s Om Diva and on her own site. In today’s world, it was a smart move for her to get digital. “I self-taught myself a lot of this. I taught myself how to make jewellery and then built my own website. It’s actually good because when you’re working on a budget for yourself, you have to be resourceful and learn how to do things for your own sake.” What’s the hardest thing about it? “My biggest thing is being too humble. Artists tend to be hard on themselves and at the beginning, I would have been like ‘Oh you like this piece? I’ll give it to you!’ I didn’t know my own worth, and I had to learn how to be tougher on that.”

Being constantly ‘on’ has its perks. Ciarna is able to communicate with people who share her love of design and get the word out about Kiki Na. The brand’s Instagram is awash with colour, bold imagery and strong models, and it’s attracted the people she wants to wear Kiki Na. “I made a piece for Louise McSharry recently – I met her out one night and complimented her glasses. Like a year later, she commented on one of my pieces on Instagram and I thought: ‘Wow I should make her something'”, Ciarna said. “So I specifically made something for her, because I know she loves cats; she loves Dolly Parton; she loves gold and bright colours; so I made it with her in mind. The customers I’ve had have been amazing, fascinating people; very strong, brilliant customers. People I’ve met and got along so well with.”

Imagery is a huge part of the distinctive Kiki Na design. Most pieces feature a musician, fashion or cultural icon as the main focal point, surrounded by bold, almost tribal design and colours. Where did Dublin girl Ciarna get her inspiration?

“I’m surprised by my own ideas sometimes; I make it up as I go”, she said. “The jewellery looks tribal and African but I had never researched that – this is just what came out of me. I do love bold colours, I love bold shapes, I love bold designs, and it just developed from there.”

“My inspiration comes from shapes in nature, shapes in architecture. Also, the fact that I was living in Asia, there was an influence there – there’s a visual feeling around all the time that’s totally different to home. Even the colour of the air in the heat is so unusual. When you’re a visual artist living in a different country, you can’t help but be influenced by it, colour-wise or sense-wise.” 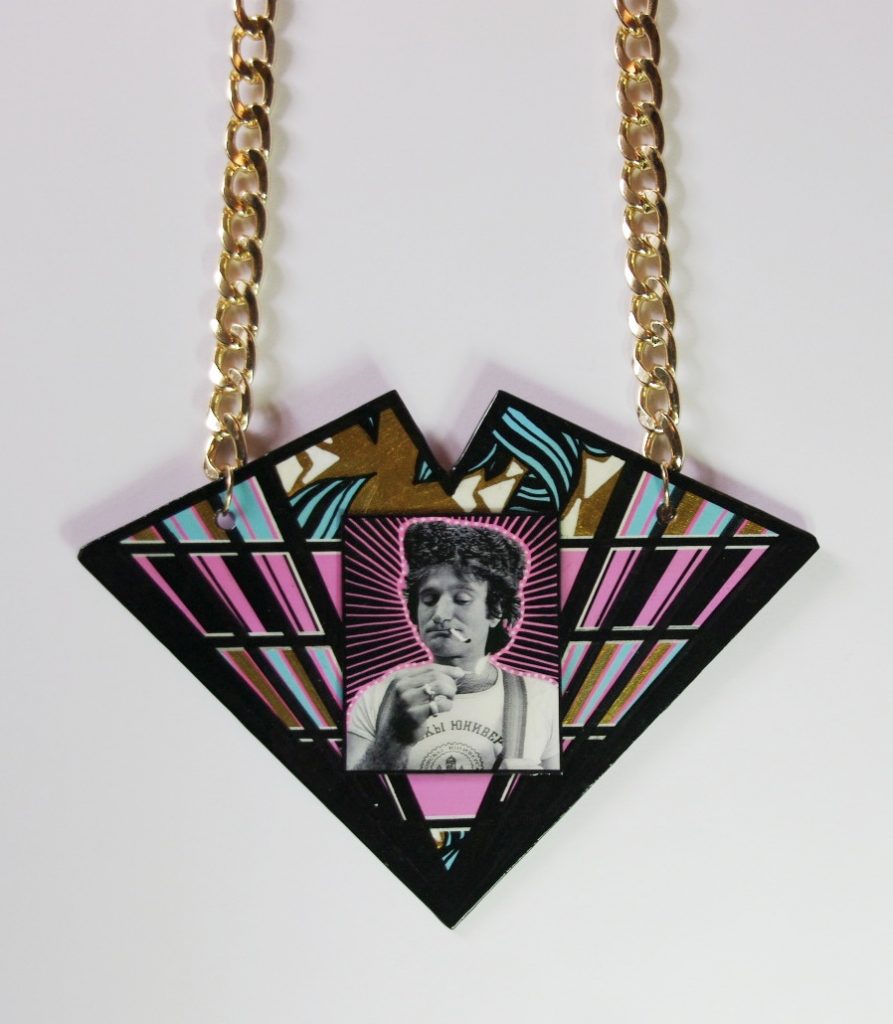 The iconography of the pieces is the big pull. David Bowie, Iris Apfel, Grace Jones, Beyoncé – the modern-day icons we want draped around our necks. This is what Ciarna cites as her vision for Kiki Na. The jewellery represents her version of the religious icon jewellery of the past. But how does she choose her modern-day icons?

“I always wanted to have my own voice in what I do. It comes from my political views, my taste in art, my taste in imagery and icons – I wouldn’t put someone on a necklace that I wouldn’t respect myself – like if someone wanted Maggie Thatcher on a necklace, I wouldn’t be into that”, she laughs. “But I like using musicians a lot because many of them are quite visual. For David Bowie and Nina Simone, obviously it was mainly about the music for them, but there was an expression of who they are through their fashion. There’s a fashion element to people like that that makes it easier to use them as icons.”

“Personalised images are what works because that’s what people feel connected to.” 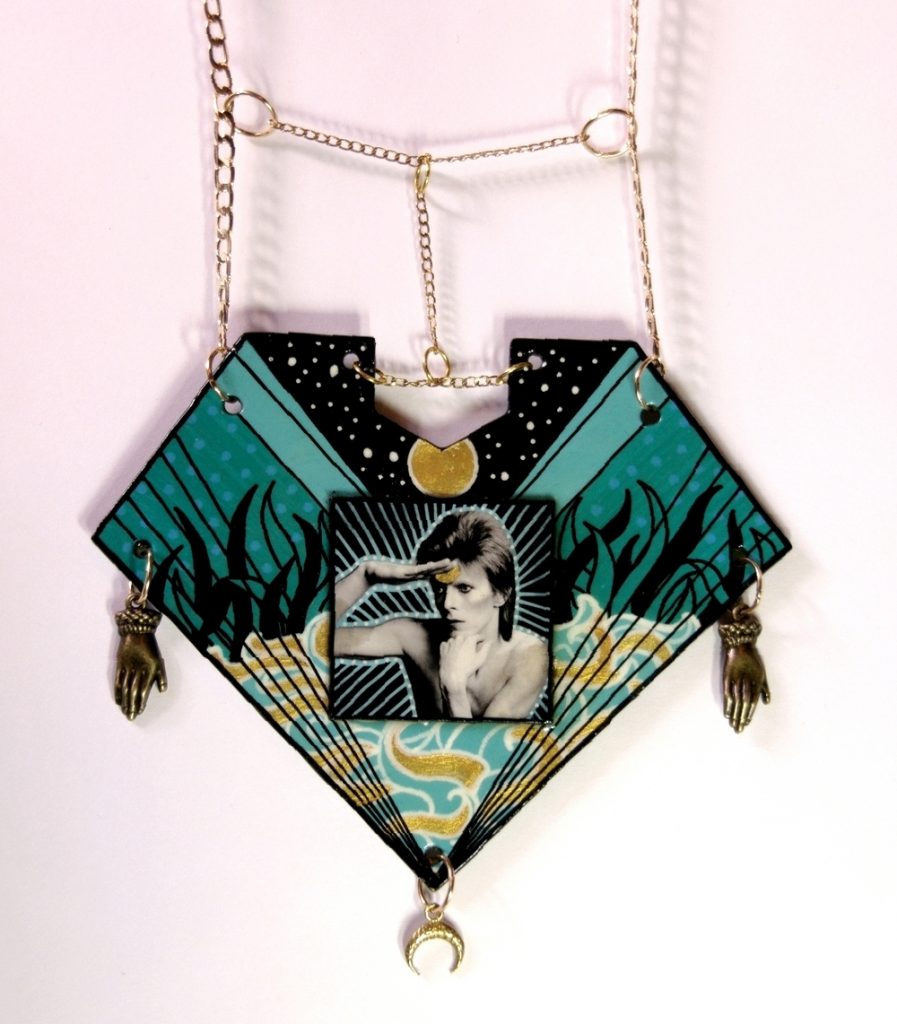 With Kiki Na’s pieces being so on-trend and unique, it’s hard to believe that Ciarna still works part-time in a ‘normal’ job. She admits that it’s hard to keep everything balanced. “I feel like there’s never enough hours in the day. The part-time work is the steady income, the design isn’t always steady. I feel like my whole life is about work at the minute.”

Ciarna is a big advocate for using art as a way of meditating, citing it as something she uses often to relieve stress. “My art is a time where I can sit and my brain won’t be working overtime. If I have thoughts about stressful situations, I find that I can process them slower and more organically,” she says.

“It’s really important to find a space where you can slow down. We’re so used to processing things so quickly, that when bad things happen, you can’t deal with them. When I worked with street children in Vietnam, their lives were so hard and the only time they had to themselves was when they came in to do artwork. This was their haven and now they’re in their 20’s and studying art and design. I think art was the thing that changed things for them”.

So what’s the end-goal for Kiki Na? Ciarna has set her sights high. “I joke with my friends that I’d have a massive studio with reams of paper and stuff hanging everywhere, and clients like Vivienne Westwood coming in and out.  I think it’s the same for every artist.”

But she also has her mind set on the present. “People are always looking to the future and that’s important for motivation, but now is really important too. I live in a small house and I work hard to live hand to mouth, but I’m so lucky that I have good people around me and I have work that I love. If you worry too much about where it’s going, you forget to appreciate where it is right now. I’d love to make more money and have more people wearing my pieces and I have faith that that will happen. But right now, I’m happy with where it’s at.”