Julia Roberts is a rare kind of celebrity. There was a time, particularly when she stood in front of a boy in Notting Hill and asked him to love her, that she was quite possibly the biggest star on the planet. Still, she retained accessibility; an openness and warmth that we just don’t see from public figures in 2018. The New York Times called it; the death of the celebrity profile where stars like Beyoncé and Taylor Swift can go years without giving a full interview. Sure, it increases their star power, but to us ordinary folk, in doing this they can remain distant, almost cold figures.

Perhaps that’s why Roberts was the untouchable rom-com queen for so long; we saw ourselves in her. From the woman who schemes to ruin the wedding of her best friend (we’ve all at least thought about it) to the working mum turned badass lawyer who could, on another silver screen occasion, get a fairytale ending (and Richard Gere) without prompting mass millennial eye-rolls – we wanted to think we, if even in some alternate universe, could pull a Julia Roberts of our own one day.

The fact that she was hailed as always stylish – but never a game-changer – when it came to fashion, only added (and still adds) to her likability and appeal. She always looked comfortable; wore what suited her (anything low-key, sophisticated and elegant) and, frequently went without shoes. More importantly, she looked like she actually enjoyed herself while on a red carpet – her beaming smile said it all. Who else remembers the fact that she won her Oscar in 2001 for Erin Brockovich, but has to do a quick search to recall the dress and designer she wore to the Academy Awards that year? (It was vintage Valentino, in case you wondered). 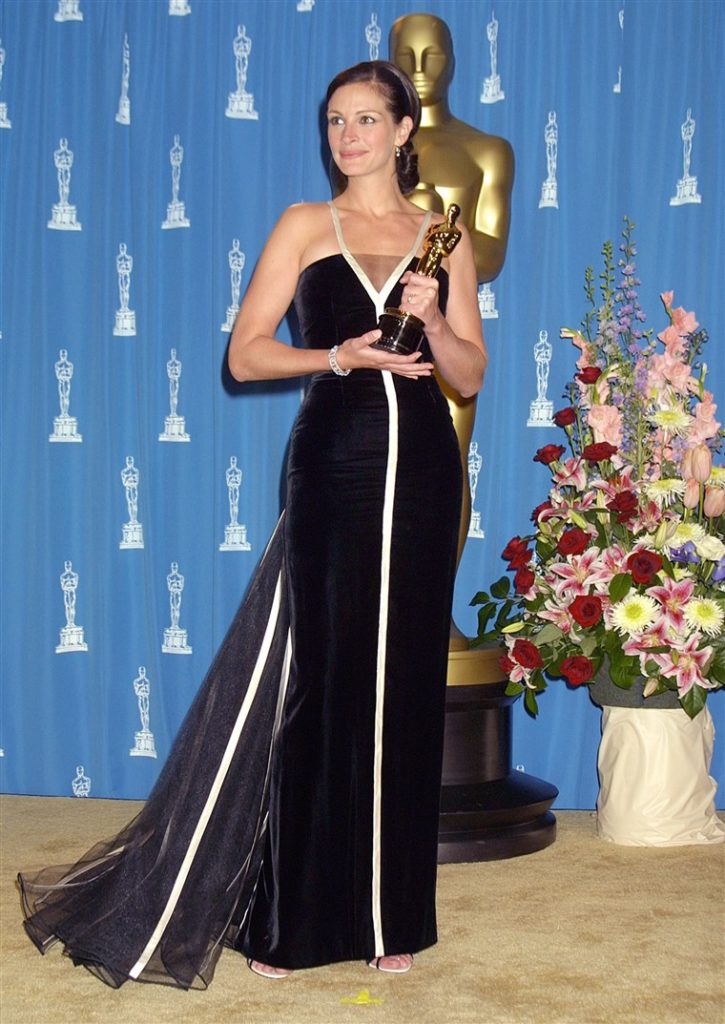 You always remember more than what – or who – she wore because the woman wearing the clothes, rather refreshingly, focused on anything but that.

For so long on red carpets,  because it was about “who are you wearing” the more ‘fun’ side of fashion seemed to take a backseat. Even today, actresses are spokespeople for designer houses, limiting their sartorial choices to the trends of the season. What happened to spontaneity? Where did the art of dressing up to simply feel fabulous go? Fashion shouldn’t always be about making a big or serious  statement (though this is obviously important, especially in the era of #MeToo); at it’s simplest, it’s there to help you feel like the best version of yourself – but often, in the glare of runway shows, this can get overlooked.

And to those of us who prefer to use fashion as a chance to express our more natural self – as opposed to the more serious, trend-based nature that rules the designer houses in 2018 – Roberts is that champion. 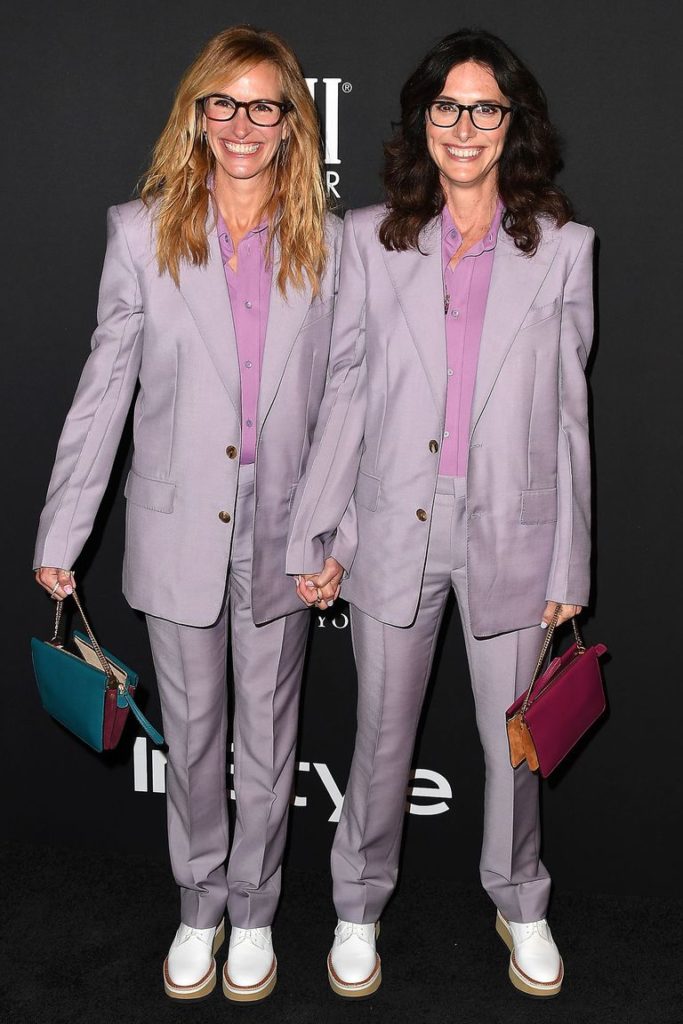 Yesterday, Roberts and her stylist BFF Elizabeth Stewart actually planned to twin from the start at the 2018 InStyle Awards. A case of double vision for the pair, as they wore the exact same outfit, even down to their shoes.

The pair matched in every way, from their identical lilac Givenchy suits, thick-rimmed glasses down to their pink shirts, white platform Oxford brogues and coordinating bags, complete with relaxed hair and minimal makeup.

According to InStyle, it was Roberts who came up with the idea when they were discussing outfit choices for the event.

“It’s not often we get to go to something together,” she explained, “and I said, you know, because we do look alike, ‘What if we wore, like, a similar outfit? Let’s wear the same thing.’”

And you know what? It was bloody glorious. Here, a megastar invited to pick up a fashion icon award, just chose to roll with it; her smile radiates, she looks like she’s having the time of her life – she even seems adorably goofy. It’s not too serious; it’s fun, a chance to have a few drinks and laugh off and embrace, rather than recoil at, all the similar times stars have unexpectedly doubled up on glitzy carpets and avoided each other for fear of the shame (and incriminating photos the following day).

If this is her way of encouraging fellow women to ‘pull a Julia Roberts’ – we’ll take it. Matching suits and all.