How Fashion Can Take Women Forward In Their Careers

Historically, women who were preoccupied with pretty things like clothes were considered frivolous. Author Jane Austen played up this stereotypical view of women beautifully in her characterisation of the Bennet sisters, Lydia and Mary, in her 1813 novel Pride and Prejudice. The former, whose only goal is to shop and flirt with offcers, is described as ignorant, idle and vain. Pious Mary, on the other hand, dismisses such trivialities, declaring them to be “congenial with the generality of female minds, but … I should infinitely prefer a book”. And there it was: a woman was either learned or absurd.

The penchant for “power dressing” in the 1980s was a direct response to centuries of this kind of pigeonholing. Men had power and they wore suits, so women climbing the career ladder adopted what they perceived to be the uniform of authority. Of course, it wasn’t the two-pieces that gave men their status, it was simply the fact that they were men. Over the last two or three decades, however, fashion has become a help rather than a hindrance to women in positions of authority. Leaders such as Michelle Obama and Christine Lagarde have cleverly used their clothes as a way of piquing people’s interest in them, and consequently in what they have to say. As the old adage goes, “see me, hear me”. When you command someone’s attention visually, they are far more likely to listen to what you have to say. These women use clothes, not as armour or as a protective shield, but as an invitation.

Michelle Obama’s full-skirted dresses (these may not seem radical, but compare her stylish Naeem Khan appliqué dresses and Carolina Herrera prints with the dowdy “lady suits” of her predecessors) and Christine Lagarde’s vibrant scarves are sartorial overtures to understand the personality behind the public figure. It sets them apart and differentiates them from their neutral-clad peers. Far from being frivolous, their fashion choices are in part politically motivated. Converting somebody’s indifference into an allegiance can begin by simply wearing an eye-catching dress. And when somebody like Obama does this, she redefines what it means to look like a First Lady, and with its trickle-down effect, a politician, a CEO and a woman in business. She also disassembles that traditional link between the “ Three Fs” – fashion, femininity and frivolity. Multimillion dollar entrepreneurs such as Natalie Massenet and women like Linda Fargo (senior vice president of fashion at Bergdorf Goodman in New York), who is responsible for millions of dollars in revenue for the iconic store, have also helped hugely to redefine what success and power look like. 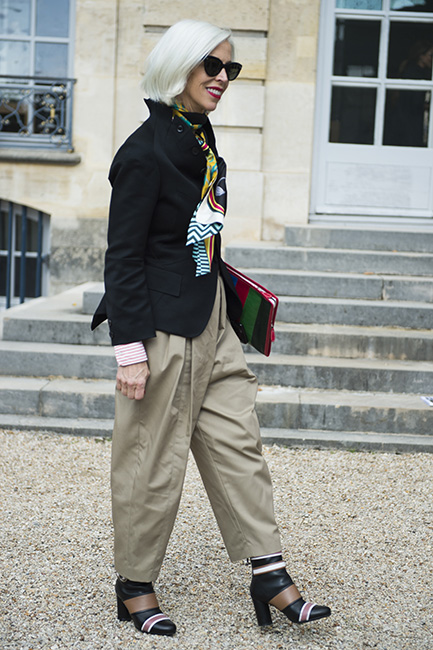 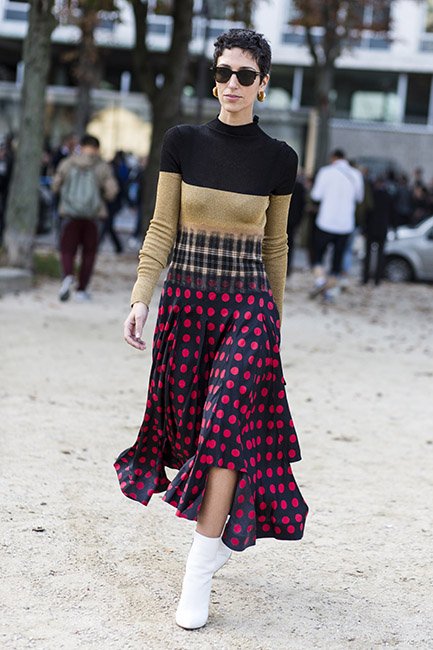 Linda Fargo (top) and Yasmin Sewell (above) are two of many successful women who have redefined what power looks like.

British Prime Minister Theresa May is not ashamed to admit that she loves shoes (and her Vogue subscription), reportedly using her fancy footwear – leopard-print kitten heels, patent leather over-the-knee boots, diamanté-heeled brogues – as an ice-breaker and talking point. Last year, she explained that “one of the challenges for women in politics, in business, in all areas of working life, is to be ourselves, and to say you can be clever and like clothes”. May has no qualms about making official appearances and arriving at cabinet wearing Vivienne Westwood, Amanda Wakeley or Burberry, and she has the confidence to wear these prestigious labels with ease. This kind of confidence suggests an ability and self-assurance in her life and career too. May’s style choices work because they’re authentic. This is who she was pre-Prime Minister, and this is who she remains – a smart woman who understands and enjoys fashion as well as politics. Be it voters, consumers or investors, the public wants to see authenticity in those they look up to, and clothes play a key role in shaping that image.

Fashion is, in fact, a language. We all speak it, though some of us are more fluent in it than others. If in the past, women’s clothes were a form of enslavement as well as derision (from rib-busting corsets in the 1900s to crippling high heels and unwieldy pencil skirts in the 1950s – forget nowhere to run to, there was no way to run), women around the world today are proof that they’re no longer the victims of fashion, but the protagonists in their own sartorial story.

But what of those public figures who simply don’t speak the language? Former US Presidential nominee Hillary Clinton was derided throughout her husband’s Presidency for being anti-fashion in her pastel-coloured clothes, and again as Secretary of State for her more stern trouser suits. During her presidential run in 2016, the New York Post reported that Clinton had hired a team of image experts, including a former aide to Michelle Obama, to reshape her style. Clinton replaced the genderless trouser suits with textured Giorgio Armani jackets and fitted Ralph Lauren suits. The agenda, however, was not to draw attention to her style, but to deflect the media glare away from it.

Coco Chanel’s iconic quote, “Dress shabbily and they remember the dress, dress impeccably and they remember the woman” applies doubly to women in the public eye. Dress badly, and your outfit will make the headlines, dress smartly and your policies will. It’s a tricky thread to unravel – how stylish is too stylish? Essentially, the outfit needs not to overshadow the message. But ultimately it goes back to authenticity. Imitation may be the best form of flattery, but it’s the worst way to approach your wardrobe.

Need clarity of mind for 2022? Start with a cathartic wardrobe cleanse