The Emmys celebrated its 70th year last night with Colin Jost and Michael Che as hosts. There were winners, losers, politically-motivated performances, tweets and even a live marriage proposal (Glenn Weiss, the director of the 2018 Academy Awards, proposed to his fiancé Jan Svendsen after receiving an award for directing for a variety special at the Emmys). The energy was jovial as actors made their way down the red carpet and showstoppers on the night included Tiffany Haddish in a multi-coloured, Crayola-inspired plunging Prabal Gurung gown, Scarlett Johansen ruched hemline revisits the sex appeal of a high side split, Westwood’s Angela Sarafyan in a stunning traditional-style ball gown and a tiered white waterfall gown as worn by Jessica Biel, below.

Red carpet fashion as we know it is changing and we’re experiencing a new kind of fashion experience, one that’s exciting and unexpected. If you missed the red carpet last night, here are four standout moments that will stay with us long after award season is over. 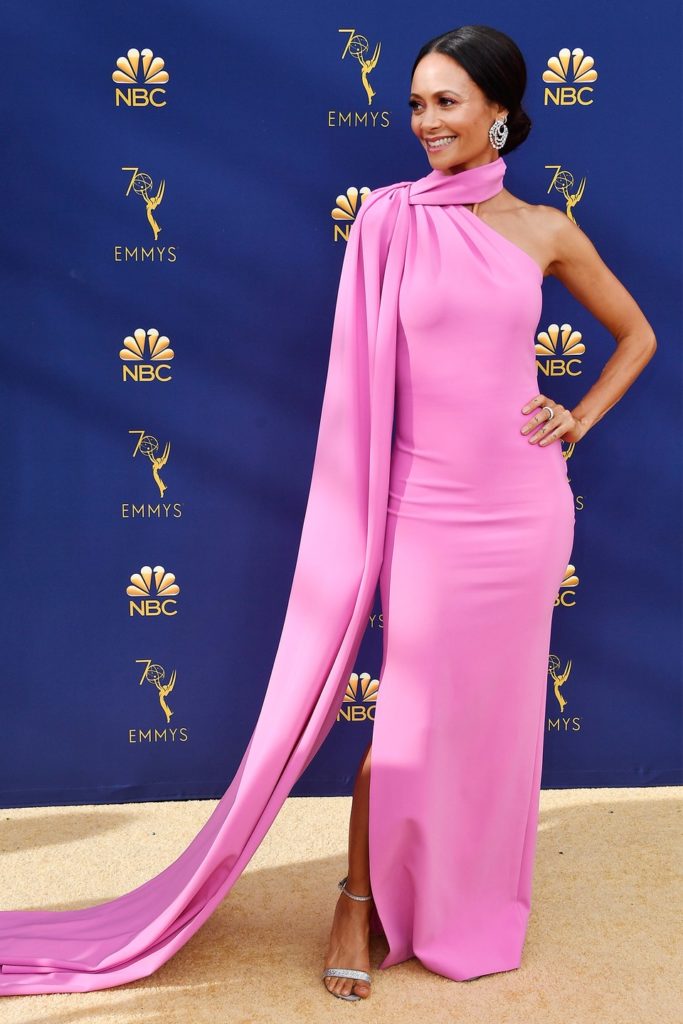 If Thandie could bottle the confidence she’s radiating in this photograph she’d be worth a fortune (if she weren’t already a successful actor, of course). It’s not fully clear whether this Brandon Maxwell number has an extra-long scarf or an exaggerated sleeve  – there are a few pictures circulating online that sparked our speculation – but either way, it’s an absolutely radiant choice and we’re tickled by the soft cotton-candy pink. Completing her look with subdued makeup, simple accessories and unfussy hair, Thandie looks elegant and classic but with a modern twist. This is a lesson in doing the red carpet the right way. 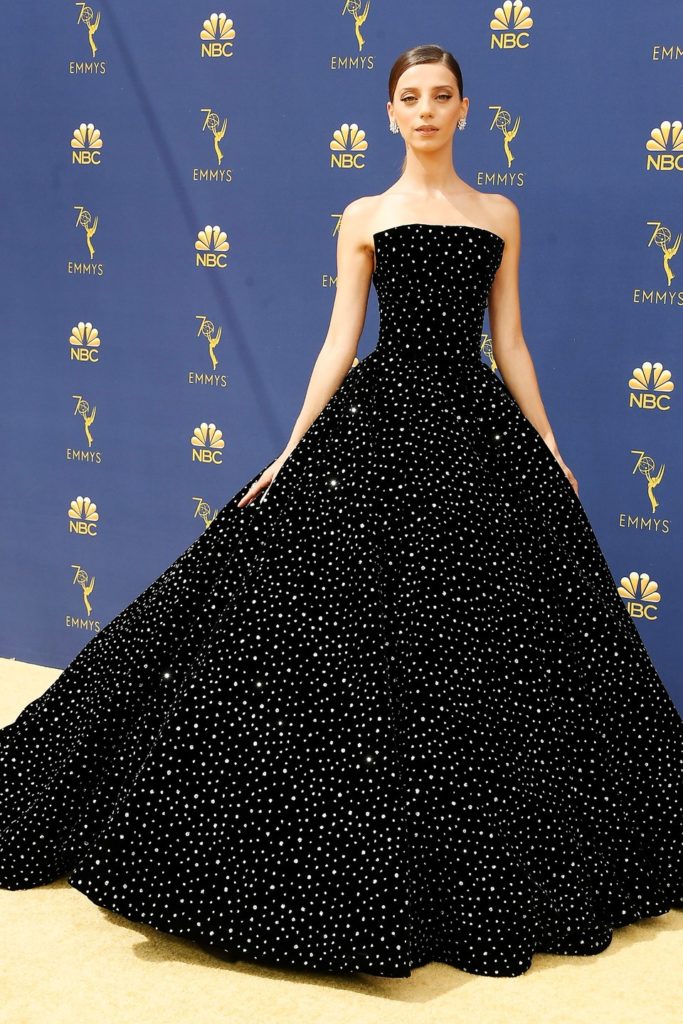 This is a glorious gown. This stunning black Christian Siriano sweeping gown is accented with diamonds and is a not-so-subtle reminder that traditional red carpet style is still alive – for now. Sarafyan was one of the first to walk the red carpet and we imagine everyone else was feeling nervous after.
Jessica Biel wearing Ralph & Russo 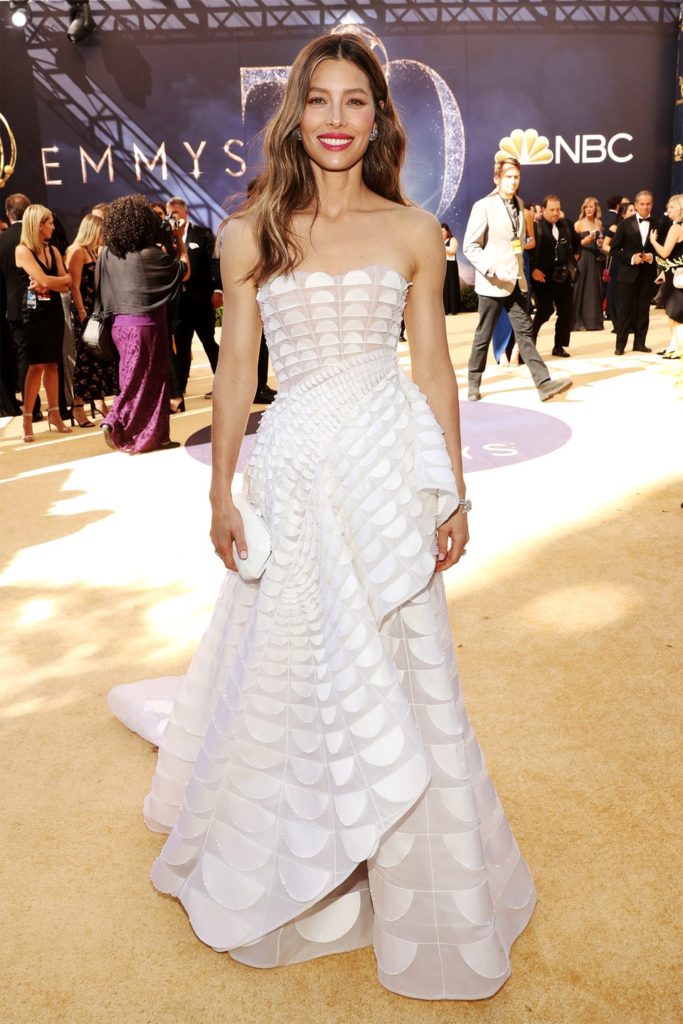 Looking back through the archives, Jessica Biel’s sartorial record at awards season has been nothing short of flawless, but this stunning  Ralph & Russo gown solidifies her status to bonafide Fashion with a capital F. This immaculately fresh dress perfectly accentuates Biel’s curves and the abstract cut adds an interesting point of difference. A solitary bangle and deep fuchsia lipstick give her look a sophisticated edge, while soft waves in her hair keep the look casual and comfortable. 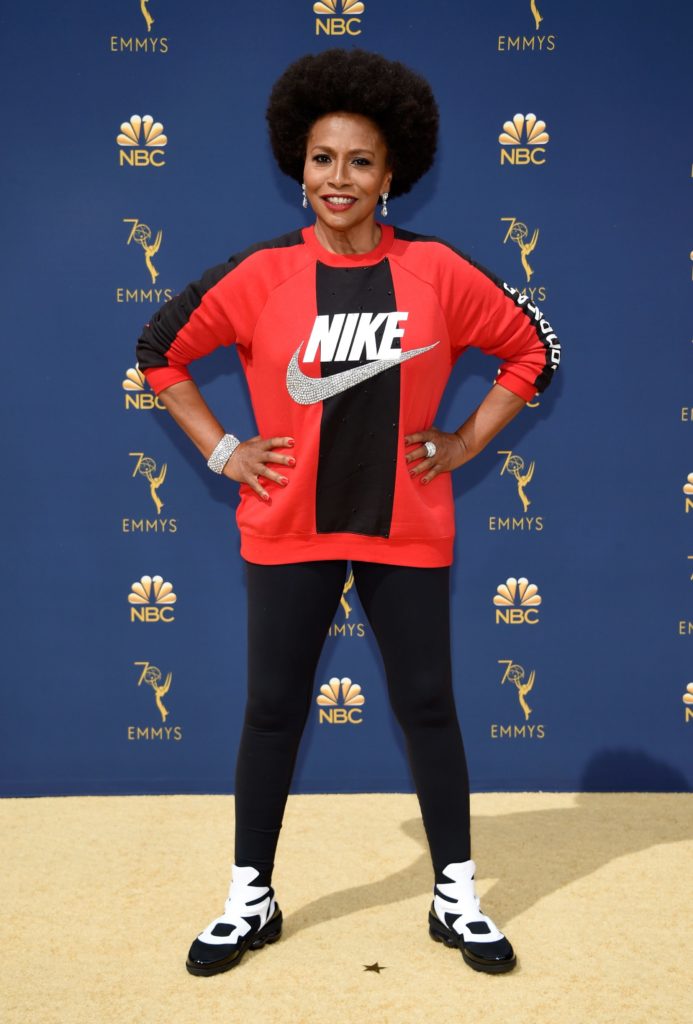 Red carpet style as we know it is dead. Though there is still a prestige that comes with awards season, our perceptions of what attendees ought to look like have changed. Well-polished ladies, graceful, poised, near-perfection, diamonds, satin have been swapped by some for politically-motivated wardrobe statements and gender-neutral ensembles and last night was no different. Black-ish star Jenifer Lewis wore custom head-to-toe, red and black Nike (including a bejewelled Nike swoosh) specifically to honour the brand for supporting Colin Kaepernick, the teamless NFL quarterback who kneeled during the national anthem to protest police brutality against black people. “I’ll wear Nike to say thank you. Thank you for leading the resistance. We need more of corporate America to stand up also. These are not dark times, these are awakening times. And we all have to wake up”, she said on the red carpet in response to her outfit. While Lewis’s look won’t appeal to everyone, it’s a perfect example of Big Dick Energy and we’re here for it.

In case you missed it, here’s a list of all the winners on the night.

Lead actor in a drama series

Lead Actress in a Drama Series

Best writing for a drama series

“Start,” The Americans written by Joel Fields and Joe Weisberg

Best Directing for a drama series

Lead actress in a comedy series

Lead actress in a comedy series

Best writing for a comedy series

Best Directing for a comedy series

Lead actress in a limited series or a television movie

Lead actor in a limited series or a television movie

Supporting actress in a limited series or a television movie

Supporting actor in a limited series or a television movie

Writing for a limited series, movie or dramatic special

Directing for a limited series, movie or dramatic special

The Assassination of Gianni Versace: American Crime Story, “The Man Who Would Be Vogue”  Directed by Ryan Murphy