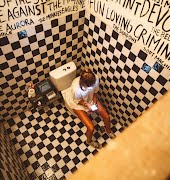 Supermodel and soon-to-be major actress Cara Delevingne has finally addressed that Vogue interview where her bisexuality was dismissed as a phase by the article’s writer Rob Haskell. Cara was speaking to the New York Times about her upcoming movie Paper Towns when she broached the speculation surrounding her personal life.

?My sexuality is not a phase,? she stated. ?I am who I am.? However, Cara wasn’t angry at Vogue for the article adding that she saw ?nothing malicious? in the entire affair. Tell that to her fans and other people who started a petition looking for an apology from the fashion magazine over their dismissal of bisexuality. Especially since Cara was so honest about how she came out and realised she was attracted to both men and women aged 20. She even talked about her girlfriend, St. Vincent and how she was so happy with life right now, “I think that being in love with my girlfriend is a big part of why I’m feeling so happy with who I am these days.”

The 22-year-old has many reasons to feel on top of the world these days. And not only because her personal life is falling into place after years where bouts of negativity and family issues, her mother Pandora struggles with a heroin addiction, plagued her mental health. Cara’s film career is finally kicking off. She has repeatedly said in recent interviews that modelling was a stop-gap before acting. ?I always wanted to act, from when I was four years old. When I was younger, I hated myself, so I preferred being other people? Modelling was never a dream of mine,? she told the Times. She also elaborated in the interview about how the stress of modelling led to her developing psoriasis.

Last month she left the agency that made her owner of the most famous brows in the world. Cara started modelling aged 10 and signed with Storm Model Management in 2009, owned by Sarah Doukas, the woman who ‘discovered? by the same woman who found Kate Moss.