The KKW Beauty body foundation… Would you be bothered?

Is Kim Kardashian taking it one ‘imperfection fixer’ too far, or is there a place in the beauty world for her body foundation? There’s been uproar… But, would you be bothered? Would I?

Like everyone else on earth, practically, I’ve seen or heard about Kim Kardashian West and know more than I care to admit about her life and family. I wouldn’t consider myself a fan at all, but I have no issue to take with her – literally nothing she does in the world directly effects me, so why would I?

With the release of her Body Foundation, part of her KKW Beauty range – which has an extensive shade range, costs about €45 and is currently sold out worldwide – there’s been absolute uproar and backlash from many corners. I haven’t tried it – it’s sold out, I did attempt to get my hands on it – but I have some feelings on the subject I felt might reflect others’ sentiments.

Ostensibly, it’s heaping yet another reason to feel insecure on an already heaving pile that women, and men, have to deal with. There are people screaming in every corner of the internet that Kim is wrong for producing this body make-up. She uses it, she told the internet, to cover up her psoriasis on particularly flaky days.

Very outspoken with her views on body acceptance and positivity, Jameela Jamil said on Twitter of the product, “I’d rather just make peace with my million stretch marks and eczema. Taking off my mascara is enough of a pain in the arse. Save money and time and give yourself a damn break.” 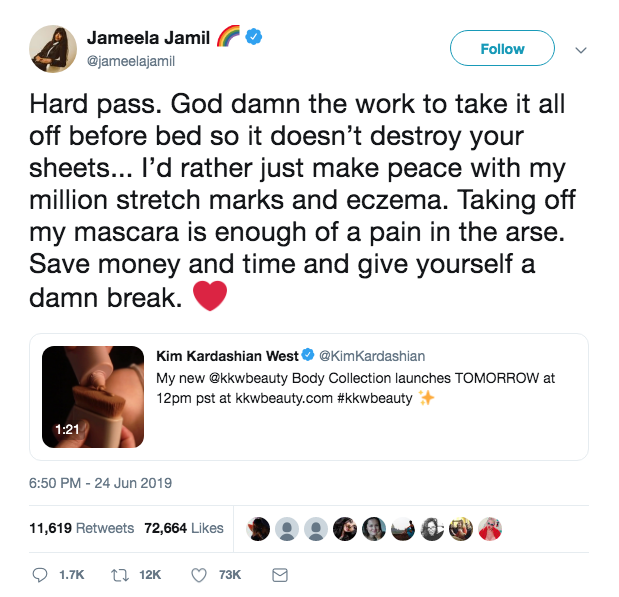 Not a new notion

But I’m here to ask… Was I the only one who immediately thought of MAC Face & Body? Vita Liberata Body Blur? Sally Hansen Airbrush Legs? Vichy Dermablend? The latter of which, by the way, can literally cover tattoos for brides and actors.

Body make-up isn’t a new notion at all, and sure, this one seems to go a step further an blur EVERYTHING, covering all evidence of Kim’s own psoriasis in the videos she posted to Instagram, but does that make it a new thing? No. 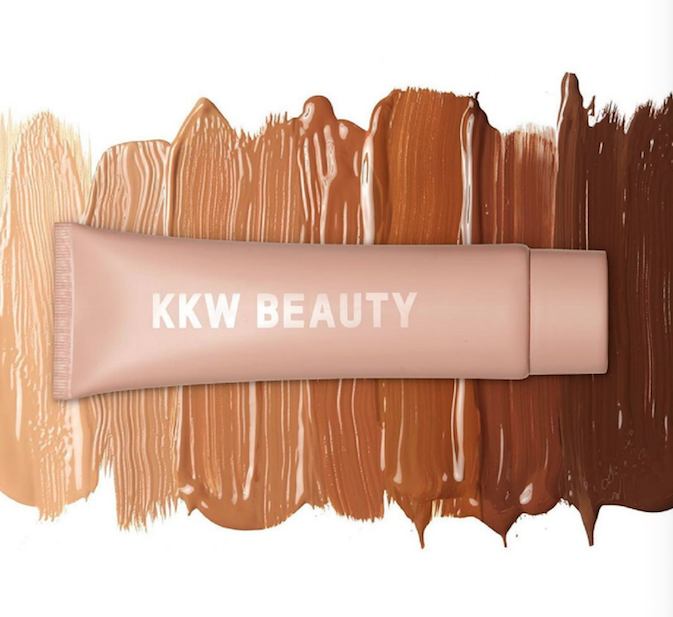 I don’t think, when Kim Kardashian West came up with the concept for this product, that she was doing it insisting that every women ‘needs’ to wear foundation on their body. She seemed to be saying ‘gals, I have days where I’m morto over my scaly skin and I’m sure you do, too’ and I’ve no issue with that particular sentiment.

Sure, she’s gonna turn a profit from the sale of her (already sold out) body foundation. She’s not running a charity (although does give a lot of time to worthy causes), and so we can’t fault her for that. She saw an opening in the market and took it, just like any other savvy business person.

I’m so excited for you guys to try my new @kkwbeauty Body Collection. It consists of 3 different products (body make up, a liquid body shimmer and a loose shimmer powder). I use them all separately and sometimes all together depending on the look I am going for. This one shown above is the body Make Up. This is what I use most often. I don’t always like my legs to have shimmer on them. I use this when I want to enhance my skin tone or cover my psoriasis. I bruise easily and have veins and this has been my secret for over a decade. I’ve learned to live with and not be insecure of my psoriasis, but for days when I want to just cover it up I use this Body Makeup. My formula is so creamy and buildable and has a smooth satin finish. It builds easily for a more full coverage if needed. It launches 06.21.19 at 12pm pst at kkwbeauty.com #kkwbeauty. Stay tuned for some videos showing how i use it all.

Which makes me wonder… Is the outrage at the body positivity issues the product brings up? Really? Or is the issue that multi-millionaire, beautiful and somewhat controversial celebrity Kim Kardashian West is continuing to succeed, make beauty solutions for women and has legions of fans who will buy her wares?

When Rihanna launched Fenty’s Body Lava, it was met with choruses of ‘yaaaas queeeeen’ and the sort. So why is KKW getting such backlash for the same thing? It seems unusual even to me, a hardened beauty cynic.

Embrace the product and hide your flaws, or don’t. Kim isn’t telling you you need to, she’s just providing a product to help should you choose to.

I’m so stressed, and now my skin is turning against me

We’re hiring: Would you like to join IMAGE media?

First look at the autumn issue of IMAGE

Enter for you chance to WIN a complete hair makeover from the talented Australian hair stylist Melvin Royce Lane.Tired of...

Naomi Osaka has just launched her own skin care brand, specifically for people of colour

Naomi Osaka has entered the skincare chat. Ever wonder how Naomi Osaka gets her skin so good? Well, wonder no...

The best cooling beauty essentials to see you through a heatwave

The best in cooling beauty to leave you soothed and refreshed.

A renewed appetite for genuine imagery during Covid-19 (grey hair, stretch marks and curves) is to be welcomed but is...

The dermatologist guide to cleansing correctly, as apparently over half of us aren’t washing our faces properly.Do you remember, last...

Gareth Bromell, a global talent in hair who has worked with the biggest names in fashion and entertainment, has opened...