You’re Better Off Buying This Than You Are Investing In Property, Gold, Or Stocks

Looking to invest some money into something wise? Thinking property, gold, or taking to the stock market? Think again…

In fashion, we often talk about “investment” pieces; the key pieces that every woman should, at some stage, invest in. They are the tops, and skirts, and bags and hats that ‘give-back’, so to speak, and the idea is that this “investment piece” should last?a lifetime of wardrobe?crisis’. In today’s hectic market, nothing holds higher investment than the humble?handbag, with buyers getting more investment from handbags than from gold or property.?Who knew that a piece of leather would hold a higher value than a roof over our heads, ey? What a time to be alive, people.?Here are the bags that are really worth pumping your hard-earned, hard-saved money into…

As if we need any more excuses to lust over Chanel bags: a new study conducted by Baghunter suggests that Chanel bags currently hold a higher resale value than your property. The study focuses on Chanel’s Medium Classic Flap Bag – also known as the extremely sought-after Chanel 2.55 – which has been on the market since 1955; showing that its value has increased by an astonishing 70% in the last six years. It highlights the French designerS’ transition from seasonal accessory to financial investment. 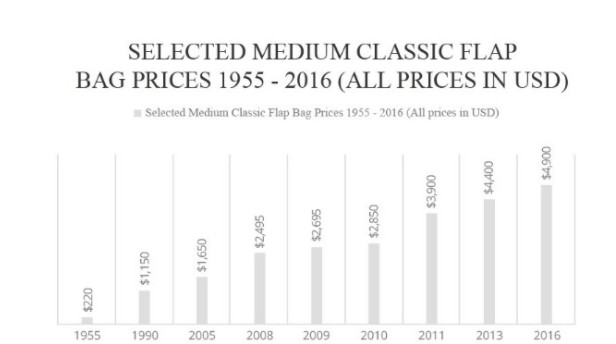 Statistics by Baghunter highlighting the increase in price of the Chanel 2.55

The Chanel 2.55 ?has experienced a 70% hike in retail value since 2010. Furthermore, it’s interesting to note that the 2.55 has never experienced a depreciation in value; meaning that the value is expected to keep rising for the foreseeable future. But has popularity alone caused the price acceleration? While there’s no doubt that brand longevity and iconism is partially responsible for Chanel’s popularity (basic economics of supply and demand), it’s necessary to factor the increase in the cost of materials, labour, production, and the fluctuation of currencies, taxes, and inflation.?

In January 2016, Baghunter also identified the Hermes Birkin bag to have a higher returning investment than gold – which is not bad going considering the Birkin only appeared on the market in 1981. In layman terms, the report identified that the annual return for a Birkin was valued at 14.1%, compared to gold which stood at -1.5% at the time the study was conducted.?Hermes Birkin bags are extremely in- vogue and highly requested; with waiting times as long as six years for a bag that can cost anything upwards of $60,000. For this reason, the bags are never advertised, are limited in numbers, and are often seen as the ultimate symbol of elitism and wealth.

Here is the big number crunch from Baghunter’s study:

It might seem remedial at first to invest your life savings in something that hangs off your arm, but trust us when we say your purse will thank you for it in a few years to come…

What to eat this week: Crab and shrimp pad Thai with chilli oil