New research, carried out by PR agency Legacy Communications, Irishman Dami Hope and his current love interest, Indiyah Polack, have come out top in the polls and seem to have already won the hearts of fans… despite not even being an official couple yet.

Monitoring everything from social media sentiment to follower increases and even TikTok views to gauge who is most likely to take home the 2022 crown according to science, their data revealed Dami to be the most popular islander on the show so far this year.

To gather the data Legacy Communications used a sentiment analysis tool on the most popular tweets in relation to this year’s show to measure the level of stress and level of relaxation viewers experienced while watching each contestant to give an analysis of popularity and winning potential.

Using the Tensi Strength model, which measures viewers’ stress and relaxation scores when watching each contestant, the team established that Paige Thorne and Jacques O’Neill are this year’s fan favourite couple, but Indiyah and Dami had the highest individual popularity scores.

On the boys’ leader board, Dami ranked above all others with a 172 relaxation points and an incredibly low stress score of -106… clear proof of his chill Irish nature. Italian native Davide followed closely behind, coming in with 175 relaxation points and a stress score of -120. Any islanders who have been eliminated or in the villa for less than a week such as newcomers Antigoni Buxton and Charlie Radnedge who both entered the villa last night were excluded from the data set.

That means that, should Dami and Indiyah couple up (as their budding romance suggests they might), there’s a high likelihood that they’ll nab the winning title on the final night.

Both Indiyah and Dami have amassed the highest Twitter following during their time in the villa at 24.8k and 13k respectively. 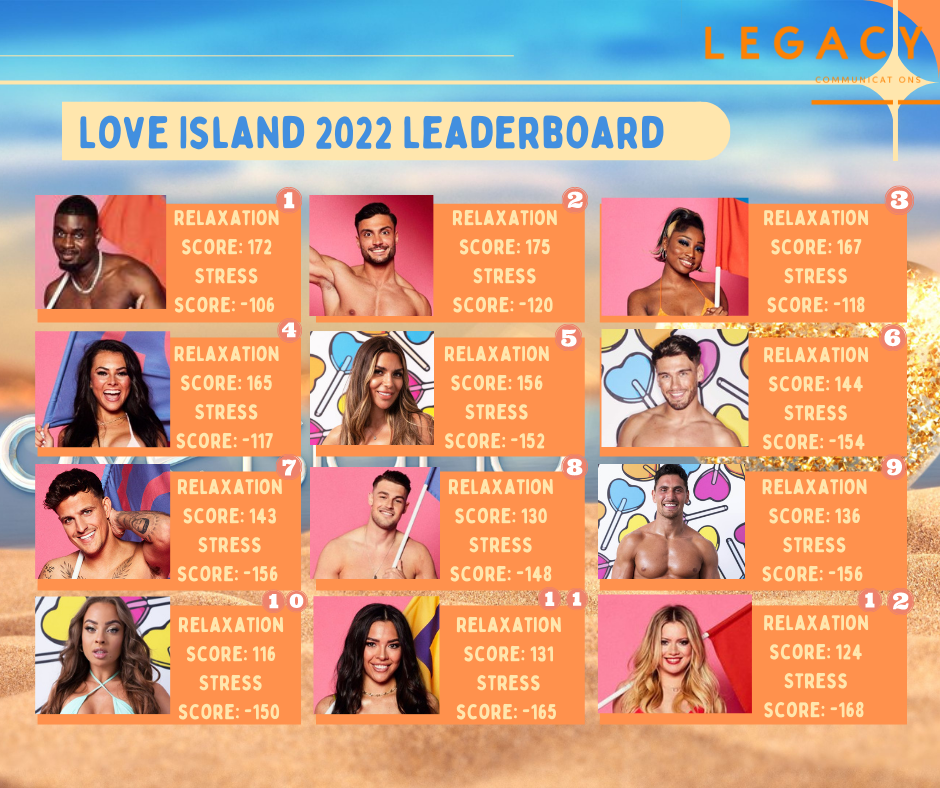 Commenting on their findings, Niamh Hopkins, head of communications at Legacy said, “To gather the data the experts analysed the social media sentiment on Twitter for each contestant, combing through thousands of tweets. Legacy then cross-referenced their figures with the number of views each contestant’s hashtag achieved on TikTok, their overall following on Twitter and other social sites, and their percentage increase in Instagram followers.”

An influencer expert with 15 years of experience in the industry, Niamh also noted that this information will be invaluable to brands looking to work with specific contestants once they leave the villa. “Brands will be looking for an authentic fit; someone whose own values match their values, who has an authentic audience that matches the brand’s target audience and also someone who is likely to stay out of hot water for the payoff, meaning contestants such as Dami, Indiyah, and Paige with low-stress scores are a perfect fit.”

Many former islanders have enjoyed continued success since their time in the villa, including the likes of Molly-Mae Hague. Announced as the new creative director for fast-fashion brand Pretty Little Thing, Hague is the highest-paid contestant to have appeared on the show, with her own tan/beauty line also taking off in recent years too.

Luca Bish had the biggest increase in followers at 12706.30%, while his love-interest Gemma Owen has proven a hit with TikTokers and has racked up a whopping 230,000,000 million views per hashtag on the app.

Davide was found to be the most relaxing to watch on screen, as per Legacy’s findings. As for the most stressful? That spot belongs to Tasha Ghouri, who emerged with a stress score of -168, according to the sentiment analysis of over a thousand tweets.

Things change by the minute in the Love Island villa though, so it’s anyone’s game still.  “It really is early days,” Niamh continued. “The environment of any reality show is so capricious. Even Toby Aromolaran and Chloe Burrows from the most recent season started off with a negative response from fans but quickly turned things around later in the series and became fan favourites. The same could still be true for Gemma, Tasha, or any of the remaining 2022 cast members really.”

To gather the data Legacy Communications analysed the social media following increases of each islander as well as the number of hashtags per contestant on both TikTok and Instagram.

To gather the remaining data Legacy used the sentiment analysis tool TensiStrength on 1,500 of the most popular tweets in relation to this year’s show. The Tensi Strength method is not an exact science however and a number of other factors could influence the results.

6 beautiful Airbnbs around Ireland to book for the Easter break