Through her newly released book, Courting, Liadán Hynes tells a variety of honest and touching stories of trying to meet The One in a rural setting, where the ingredients for successful dating – choice, proximity, free time and, for some, alcohol and anonymity – aren’t always guaranteed.

Compiled from conversations with childhood sweethearts, long-lost loves, singles, ever hopefuls and lonely hearts as they navigate this quest through tractor dates, Macra, dating apps and more, Liadán travelled from family farms to tiny islands, village pubs to remote communities to source these real-life stories.

Revealing the importance of community, diversity and, above all, hope and resilience, Courting is an insightful and unique window into dating in rural Ireland today. Read an extract below… 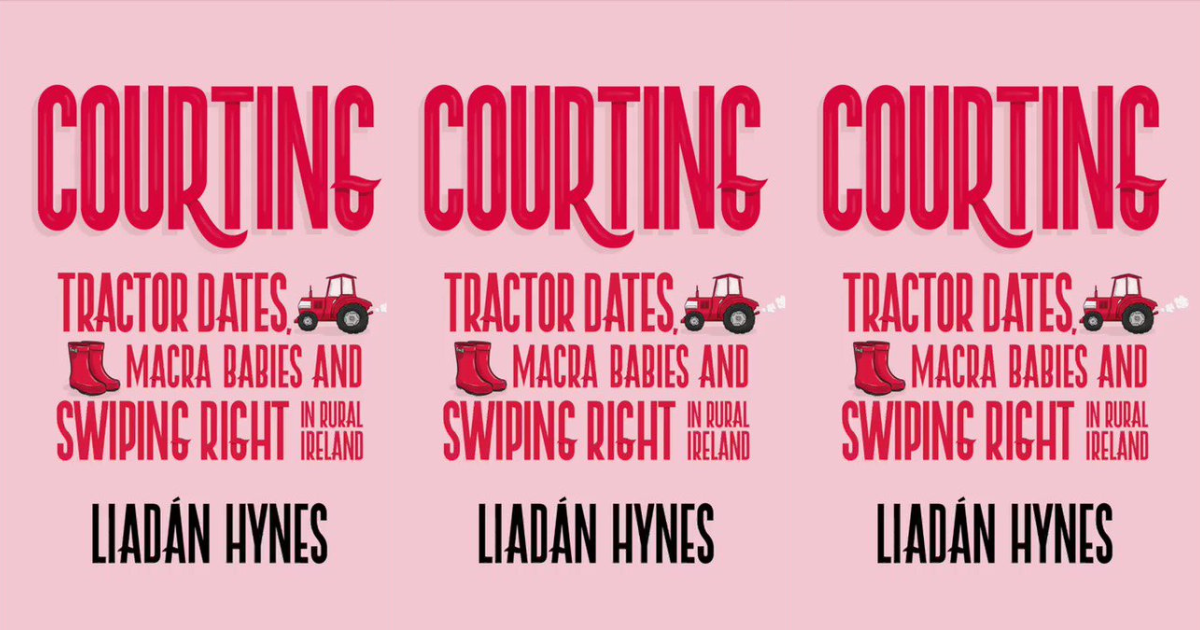 It was early 2006. The idea for a dating site that appealed specifically to people for whom country living was a priority, and who had a genuine understanding of what that involved, had first come about in the pub. Lucy was living in the city when her sister Emma came to visit for the weekend from the countryside. Over drinks, she confided to Lucy about the difficulties of meeting people when living in a rural area. Had she tried online dating? Lucy wondered. She had, but it was full of ‘townies’.

Both sisters immediately realised the issue here. They had grown up on a farm in a village. They knew that this could both predispose a person to certain priorities about their way of life, and give them an understanding, insight and yen for rural life that those who grew up differently simply would not comprehend.

‘We just kind of figured that everyone knew that that was a thing, it was a niche,’ Lucy says. Surely there must be something specifically aimed at people living in the countryside, they thought.

They did some research and quickly realised that, while there were some sites aimed at people living in rural settings, they were very limited in scope. There was a niche within a niche: a specifically equestrian-related dating site, and also a matchmaking site that required a large fee in return for organising only a couple of dates.

Lucy points to the demanding nature of farming on a person’s time. ‘Farmers have to cancel dates because they’ve got trespassers or cows in a ditch. You can’t just stop that, it’s a way of life, it totally takes over. You’re always going to put the animals first, and the farm.’

Then there’s the isolation, which living in a rural setting can involve. She tells a story of a former client, a gamekeeper who lived in an especially secluded spot in Scotland. On rare nights out he would meet women and it would often go well – occasionally things might get so far as someone moving in. But within a month or so his partner would be struggling with the long hours he worked, with loneliness, the distance from everything.

‘He found it really, really hard to meet someone who could fit in with his lifestyle, and in the end, he gave up gamekeeping for a woman because it had happened so many times to him. He never wanted to give up that work, but he wanted that other [domestic] side of his life as well,’ Lucy says.

Lucy and Emma didn’t imagine Muddy Matches would be a full-time career but decided to ‘have a bash at it’. They had been right when they had intuited that there was a desire for a dating forum which placed rural living at its centre. They wanted to create something where people who understood this way of life could find each other. It took off, and the site – yet to be an app (they’re a small, family-run business, these things take time, Lucy explains with a grin) – is soon to celebrate its fifteenth year in business. Their oldest Muddy Matches baby is now fourteen.

Make sure you check back in later this week to get an insight into the life, times and writing process of Liadán Hynes with our Author’s Bookshelf…

What to bake this weekend: Tear and share smoked garlic and cheese scones