Growing Up At The End Of The World: The documentary not to miss this week on RTE One

Youth activism is on the rise around the globe, but who are the key players closer to home? In a new documentary airing on December 30th, Kathleen Harris spends nearly two years following three Irish teen activists as, with compassion and intelligence, they try to solve the problems that an older generation have ignored.

In February 2018 director Kathleen Harris witnessed Irish teenage climate activists from around Ireland speak passionately in Dáil Éireann. It was from this moment she knew something special was about to happen.

Kathleen explains, “‘Friday’s For Future’ was started by Greta Thunberg only a few months before, and these were the Irish kids that had gotten on board right away. They were mostly 14 to 16 year olds, some were as young as 11 and 12. They spoke with such conviction, intelligence and sincerity. They spoke about how scared they were, how worried they were, how angry they were. They spoke about how they didn’t feel like the Irish Government was doing enough, and how they couldn’t understand why people didn’t see that this was the biggest crisis we’d ever faced.

It was inspiring. Greta Thunberg was still a new name at that point, but you could already feel the momentum building. I felt like ‘this is something exciting that young people are doing, and it’s going to make a difference’. I wanted to tell their stories.”

And tell their stories she did. Growing Up At The End Of The World is an hour long documentary that airs on RTE One this Dec 30th. It’s a culmination of a year and a half of filming as three teenage climate change activists demand change in a bid to save their future.

Theo, Saoi and Beth are the three young people featured in Kathleen’s documentary. “They are exceptional kids, they stood out” Kathleen tells me.

Saoi is from Cork and lives on a farm with their parents. Kathleen explains, “That day in the Dáil, Saoi struck me as being so courageous. At 5am every Friday, Saoi’s Dad would drive them to the bus stop where they would take a bus from Skibbereen to Cork City and sit outside City Hall for hours, they would do this every week. Saoi was one of the first kids to do that in Ireland, eventually other kids started doing it too.”

Theo spoke passionately about his family’s experience of living on an organic farm on Claire Island. “He spoke about the changes they have noticed living there over the years.” Kathleen says. “They don’t see as many insects and birds; they alternate between drought and heavy rain; there are more frequent and extreme storms. These things cannot be ignored when living on an island.”

The final activist that Kathleen would focus her filming on over the next year and a half was Beth, from Dublin. “Beth is such an accomplished young woman. When it comes to climate change she knows her stuff, inside and out. She wants to study law and politics and tackle climate change that way. She is incredible. Her first involvement in activism was her interest in the pro-choice movement. Her parents thought she was too young to go on marches so she would put posters on her bedroom wall. She was about 12 at the time.” 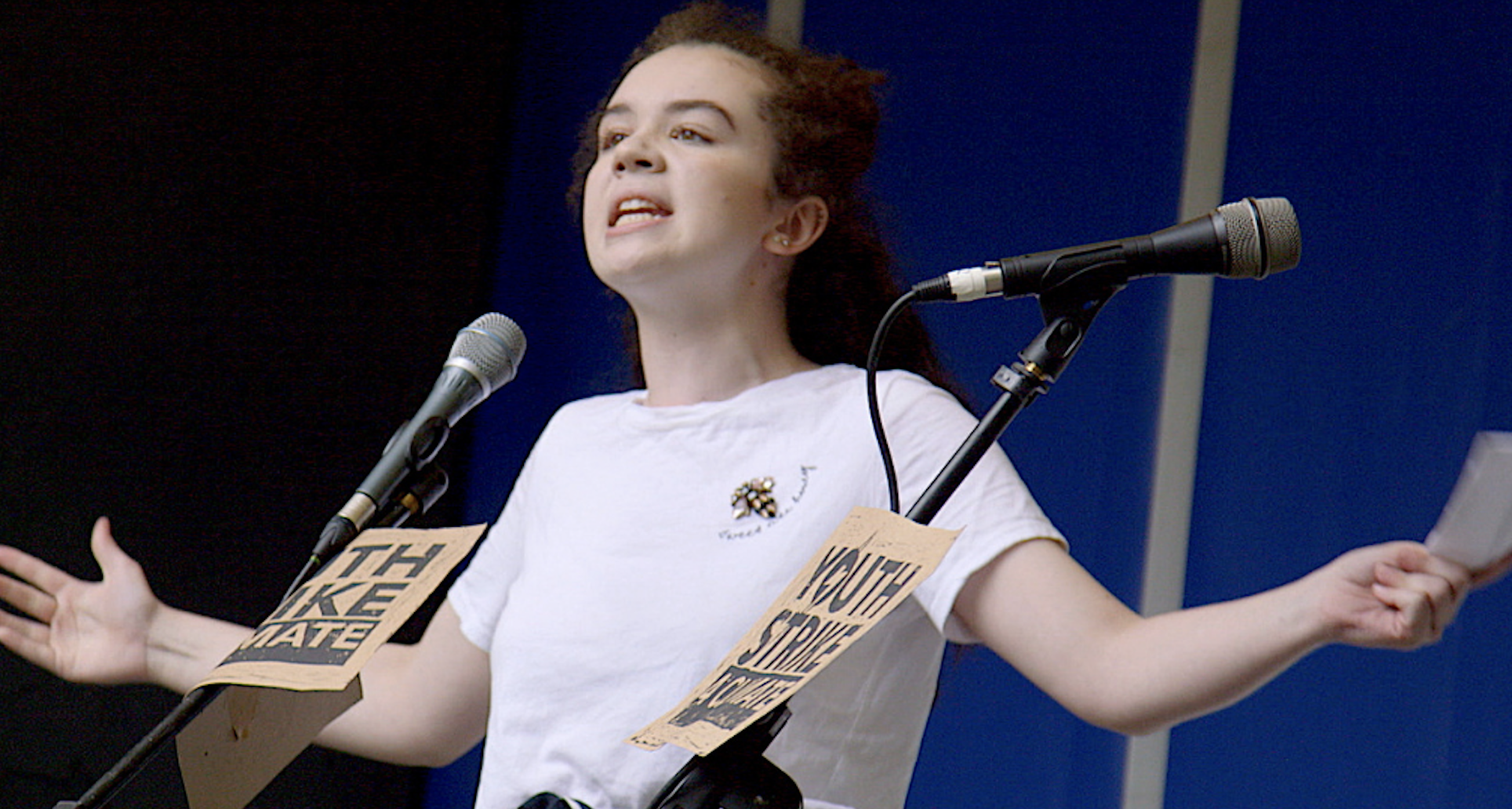 Over the next year and a half Kathleen accompanied the teens to various protests and activities. She also travelled with them to Lausanne in Switzerland in the summer of 2019 for a Fridays For Future meeting. She explains “A small group of teenage activists from Ireland travelled overland to Switzerland to meet with hundreds of kids from all over Europe, including Greta Thunberg. It was amazing to witness. They talked about everything from alternative energy sources to intersectionality. It was like a mini United Nations. There were some really complex geopolitical questions at play.”

A small group of teenage activists from Ireland travelled overland to Switzerland to meet with hundreds of kids from all over Europe, including Greta Thunberg. It was amazing to witness.

During her time with the teenage activists, Kathleen learned a lot. “I was really stuck by the kindness and the level of compassion and intelligence. They are very in tune with intersectionality and other people’s needs. They are realistic about climate change. They know there are people’s livelihoods at risk. They are constantly holding two things to be true; the need to move away from fossil fuels and to do it in a way that is just for everyone.”

Teenage activism has been on the rise for the last ten years. We see it in the media and hear about it on the radio. I ask Kathleen if it is possible that these teens are participating in a teenage fad? The newest trend? She explains, “Theo actually says at one stage in the documentary that this is not a phase, this is not a fad. He’s going to be an activist for the rest of his life. He looks at it like a lifetime commitment. They all do. It’s easy to look at them as a bunch of naive kids and think ‘aren’t they cute trying to change the world’ but they are really intelligent, and they are consumed by this.

I was really stuck by the kindness and the level of compassion and intelligence. They are very in tune with intersectionality and other people’s needs. They are realistic about climate change.

Something I was trying to capture on the documentary was just them being kids; hanging out with their friends and doing things that aren’t climate related and I was surprised when that was difficult. I asked Saoi ‘What do you do in your free time?’ and she said ‘This. This is all that I do.’”

She goes on, “they are very self aware. They recognise that they are kids and that comes with benefits and drawbacks. Saoi said to me ‘It’s great being a kid because you get attention that you wouldn’t get if you were an adult. I get access to places and people that adults wouldn’t get access to. But at the same time kids are not always taken as seriously. It’s a double edged sword.’”

Like many recent social justice movements, this is a movement very much led by young women. Why does Kathleen think that is? “It’s been shown that women are more impacted by climate change, in poorer parts of the world particularly. Without being sexist, I also think women are socialised to be more empathetic, and think of others. That lends itself to an involvement in social justice movements.

Saoi talked about this topic on a panel last year. They talked about the movement being female led and Saoi said that sometimes they are not taken seriously because they are young, and even more so because Saoi is perceived as being female. They have noticed significant sexism directed towards them. Theo also noticed that his female counterparts have more ire directed towards them. We see it with Greta too.”

Women are more impacted by climate change, in poorer parts of the world particularly.

Do they get frustrated at the current pace of change? Do they think the huge change needed, is really possible? “They think it’s possible, but they know how difficult it is. They are actually aware that it will take a lifetime to make these changes. But they are optimistic. They point to the pandemic as an example. They will say ‘Look – we were able to make tough decisions for this crisis. So we can also make tough decisions when it comes to climate change.”

I ask Kathleen if working on the documentary left her with a feeling of hope? “Yes, absolutely. This movement has already made us all think differently. It is already changing things and I think these kids will continue to change things. I hope people take it seriously, and take them seriously.”

Growing Up At The End Of The World, airs December 30th on RTE One.

This incredible period house in the Dublin Mountains is on the market for €4.25 million