Women’s March Signs To Be Collected As Historical Artefacts

Did you make a sign for the women’s march last week? If so, museums around the world are looking to collect and file them as historical artefacts.

We’re just about settling and coming to terms with the scale of unity, gratitude, respect, and love shown by women and the world over in the last week. The sea of pink hats, gloves, and whatever else pink could be found was a brightly shining (pink) light that the world needed.

Then there were the signs, and boy did we deliver. There were the funny ones about small hands and combovers, the inspirational “make America kind again” ones, and of course the very serious ones about protecting women and our reproductive rights.

Thanks to amateur photographers and social media buffs, the images will be forever ingrained in our minds, and as a result, museums, libraries, and galleries around the world will begin collecting signs in an effort to remember the historic marches that took place a day after the inauguration of President Donald Trump.

Among those collecting stateside is the New York?Historical Society who explained to The Huffington Post that any memorabilia from the day is welcomed: “we collected approximately 20 signs in D.C. and New York City, as well as several buttons, hats, flyers and stickers,”.

Right now it appears that the collections are only taking place in London and America, but we are making efforts to contact organisations in Ireland to figure out if collections are taking place.?In the meantime, here are some of our favourite signs from last week’s Dublin march.

?”Respect my existence or expect my resistance”

And of course, this little dude: “Standing in awe of all mna” 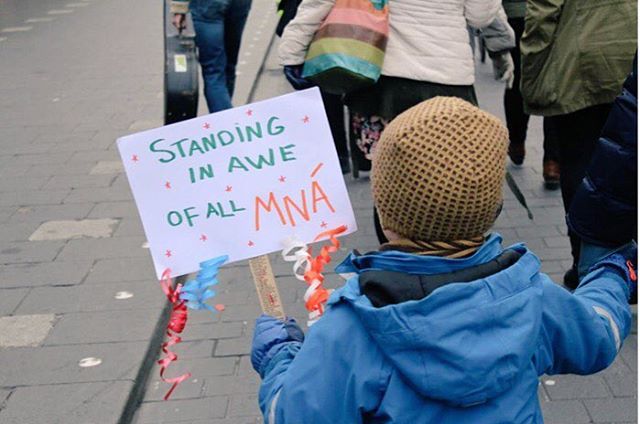