mother with baby in lap working on laptop at home

It’s quite common these days that those expecting a baby would take to social media to share their exciting news, complete with a scanned photo from their ultrasound. Before you’ve even been fully formed in the womb before you’ve uttered one word, opened your eyes or taken your first breath of fresh air, your social media footprint has begun. In a world where sharing your intimate experience has become the norm, and the private lives of celebrities are plastered all over the internet, it seems almost inevitable that our personal choices would be opened up for public discussion. Of course, for those who want to keep their private lives and their decisions to themselves, this is less than ideal. One woman who’s fed up with this new way of living is Facebook user Emily Bingham. She took to the social media platform to air her frustrations at those who ask her and countless other women why they’ve yet to produce any offspring. Her message quickly went viral, and we have to say, she makes a compelling argument. 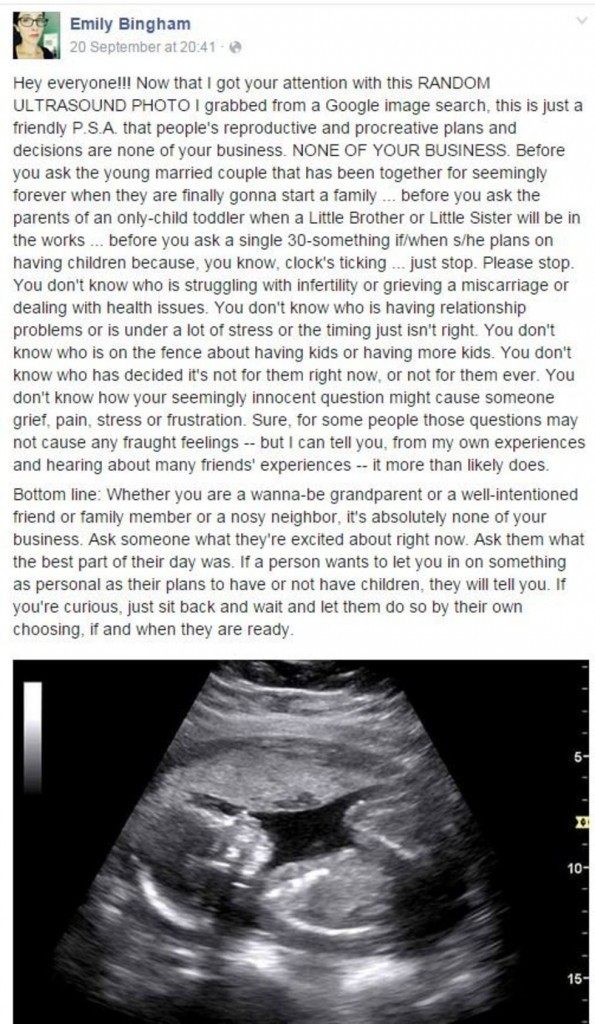 This well-received message (that was shared almost 40,000 times) comes just after Sex And The City actress Kim Cattrall voiced her own frustrations at being labelled ‘childless’, as though she’s lacking in something or less of a human for having had no kids.

#ICYMI: Kim Cattrall has had it with being labelled ‘childless’

Do you agree with Emily’s message? Do you feel it’s an inappropriate question to ask a woman?