Despite rumours being rife earlier that one of our favourite couples were set to split, we’re now happy to report that Will Smith himself has decided to put rest to the rumours and publicly say that it’s all rubbish – yay!

He posted the following statement to Facebook just this evening: 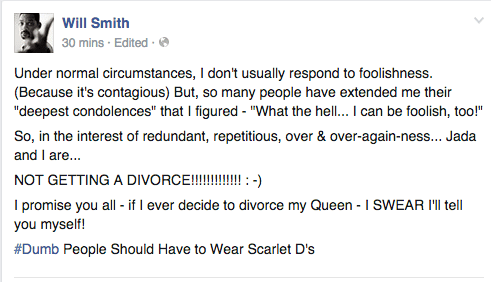 Radar,‘reported earlier that couple are said to be ending their ?rocky” marriage in what some are called a ‘secret divorce? deal.

Thankfully, it appeared to be just that – speculation.

They are one of our favourite couples, and now are faith has (for now, anyway) been restored. They have been together for almost 18 years, ?and have two children together, son Jaden, who is 17, and daughter Willow, who is 14.

According to US Weekly, ?Pinkett Smith shed more insight about her high-profile marriage to Will Smith — ups and downs included — in the August 2015 issue of American Way magazine.?Pinkett Smith told American Airlines’ inflight magazine that she and her husband are accustomed to the rumours. In fact, they weather it together.?”Every year there’s a new one,” she said.

Marriages go through shifts,” she added. “And relationships go through shifts because in life, things shift. So people are automatically like, ?What’s going on? They must be getting a divorce.? Well, no. But when people feel those shifts and there’s a mystery, they have to fill it with something.”

We’re very happy about this news.