Why the Danes are the Happiest Nation

Happiness is about the journey, not the destination. Or perhaps not. Apparently, there is one place lauded as the happiest on earth. Naoimh Wilkins looks to Denmark.

In the first study, carried out in 2012, our neighbours across the North Sea took the top spot, they also came in at number one last year, and this latest result makes it a hat-trick. The Danes really have being happy down pat. But how exactly do they keep acing this test? And more importantly, can we copy their homework?

When Catriona Ni Aolain took a three-month sabbatical from her job as director of photography for Men’s Journal magazine to relocate her family to Denmark, it wasn’t a totally madcap decision, as her photographer husband, Svend, is Danish. New York is home for the couple and their two young boys, but a sunny summer spent in the Nordic countryside was a no-brainer.

Catriona has been documenting her family’s time there on Instagram, tagging the pictures with the hashtag #thehappiestplaceonearth. Hyperbole? Not in her book. ?It’s a running joke amongst myself and my friends, as I’ve been holidaying here for years and have always described Denmark as the happiest place on earth,? she says.

Former journalist-turned-TV director Pernille Eckhoff grew up in Aarhus and now lives in Copenhagen with her husband, Nik, and five-year-old son, Bertie. She’s lived abroad, spending time studying and working in England and Australia, yet says the only country she’d ever permanently live in is Denmark. 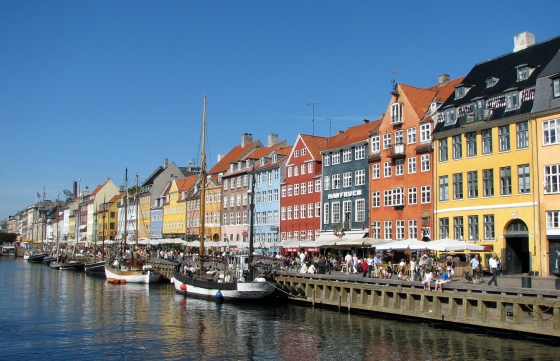 Her reasons span everything from the nation’s attitude to children, a fair social security system, free healthcare, plus a cultural attitude that accepts other people’s right to choose how they live their lives: ?Most Danes are very liberal and understand that people are diverse and have different needs. I think culturally, we have a unique attitude to parenting; we show our children that they’re worth listening to, and respect their feelings and opinions.?

A good work/life balance is key to maintaining the Danish glass half-full mentality. ?No one seems to work longer than a seven to eight hour day. In fact, it feels like it’d be socially unacceptable to put in more hours,? says Catriona. Pernille echoes this: ?A full-time job will be 37 hours per week, and because the country is small, most people don’t have a long commute, which means more time for friends and family.?

In Copenhagen, bikes account for 50 per cent of the trips to work, and science backs up the benefits of an outdoor lifestyle. On a physical level, exercising outside creates a chemical reaction that improves your mood by releasing happy hormones. For every minute on a running machine in a gym, the equivalent time spent doing a similar activity outside could also improve concentration, boost brain function, and, according to some experts, prevent depression. ?I cycle to work every day, regardless of the weather, and the journey takes about ten minutes. It’d be at least twice as long if I drove. Besides, being on the bike clears my head and means I’m not dependent on buses or ever stuck in traffic,? says Pernille.

Danish people aren’t as preoccupied with the material merry-go-round, instead choosing to spend their money on experiences rather than buying big houses or cars. Their homes aren’t lavish, but they are integral to their social lives. ?We’ll meet in each other’s houses rather than going to a restaurant or bar. It feels more personal and intimate,? says Pernille.

It’s no surprise that cultivating strong social connections is thought to be a mood-booster, and a sense of social support is covered in the report. This factor is evident in the parental leave received by Danish families, including the dedicated two weeks, often on full salary, afforded to fathers. And afterwards, childcare is either free or inexpensive, making it easier for women to return to work.

Convinced Denmark is a utopia? Well, there’s no such thing as a free dinner, and this euphoric existence does come with a price tag. Danish people pay hefty income tax (up to 60 per cent), but most will concede that the payoff is worth it.

Putting a positive spin on things seems to be part of the national psyche. The country experiences less than seven hours of daylight during winter that could stir feelings of depression and cases of SAD (seasonal affective disorder). The concept of ?hygge? doesn’t have a direct translation, but can be summed up as a kind of fostered cosiness used to combat the dreary darkness. ?We’ll light candles, snuggle up under a blanket and surround ourselves by the people we love,? says Pernille.

It’s true, money can’t buy happiness. It can, however, buy you a plane ticket to Denmark.