Christmas celebrations have kicked off at the White House, with Melania Trump8 showing off her festive decorations on Instagram.

The theme of this year’s display is ‘American treasures,’ and the layout was designed by the first lady herself. Unlike traditional decorations that feature pictures of reindeer and Santa Claus, the decorations at the White House feature US landmarks and the logo for Melania’s anti-cyberbullying campaign.

Related: 10 gorgeous picks from Zara Home that will give
your house festive cheer this Christmas

The Slovenia-native teased the big reveal over the weekend; sharing her thanks to everyone who had given their time to help. “Thank you to all the volunteers from across our great nation who are working hard to decorate the White House,” she said. “Can’t wait to view it all tomorrow night!”

She later took to social media to say, “The people’s house at the White House is ready to celebrate Christmas and the holiday season.” In a third post, she added, “The White House is sparkling.”

While the traditional-looking Christmas trees are festive, Melania has received some criticism for her use of ominous, blood-red ones. The colour red is meant to symbolise “the pales, or stripes, found in the presidential seal designed by our founding fathers,” Melania said in a statement.

Melania’s Christmas decorations look like they’re straight out of the Shining pic.twitter.com/mVMY7yuxIZ

Someone did this to Melania Trump’s creepy Christmas trees, and it’s all I’ve ever wanted today. pic.twitter.com/MwigcZxswR

Open to the public

Over the coming weeks, more than 30,000 visitors are expected to walk the halls shown above as the White House hosts more than 100 open houses. Members of the public can explore everything from the 40 topiary trees in the east colonnade, to the four big trees in the library. 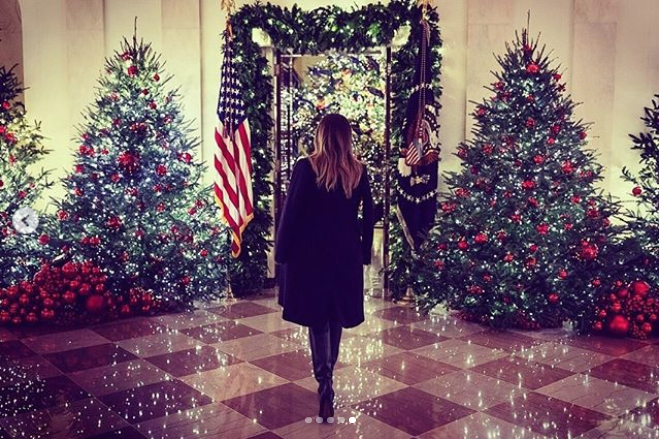 “This is a joyous time of year when we decorate the White House for the Christmas Season,” said First Lady Melania Trump. “Our theme honours the heart and spirit of the American people. Thank you to the many volunteers and staff who worked hard to decorate the halls of the People’s House in Christmas cheer,” she said.

“On behalf of my family, we wish everyone a very merry Christmas and a happy new year.”