Comments made about an alleged victim’s underwear in a Cork rape trial have sparked nationwide outrage against victim blaming. The recent case, in which the accused was found not guilty, featured the accused’s barrister arguing that the jury should reflect on the teenage victim’s underwear as a factor in their decision.

The jury unanimously found the 27-year-old man not guilty of raping a 17-year-old girl in a laneway in Cork. The female barrister said the following in her argument:

“Does the evidence out rule the possibility that she was attracted to the defendant and was open to meeting someone and being with someone? You have to look at the way she was dressed. She was wearing a thong with a lace front.”

The comments and the result of the trial have led to protest against ‘victim blaming’ across the country. Many believe that the barrister’s argument was indicative of a ‘rape culture’ in the Irish legal system, and that such comments could discourage future victims of rape and sexual assault from coming forward. There has been extensive discussion of the trial on social media and beyond over the last few days. 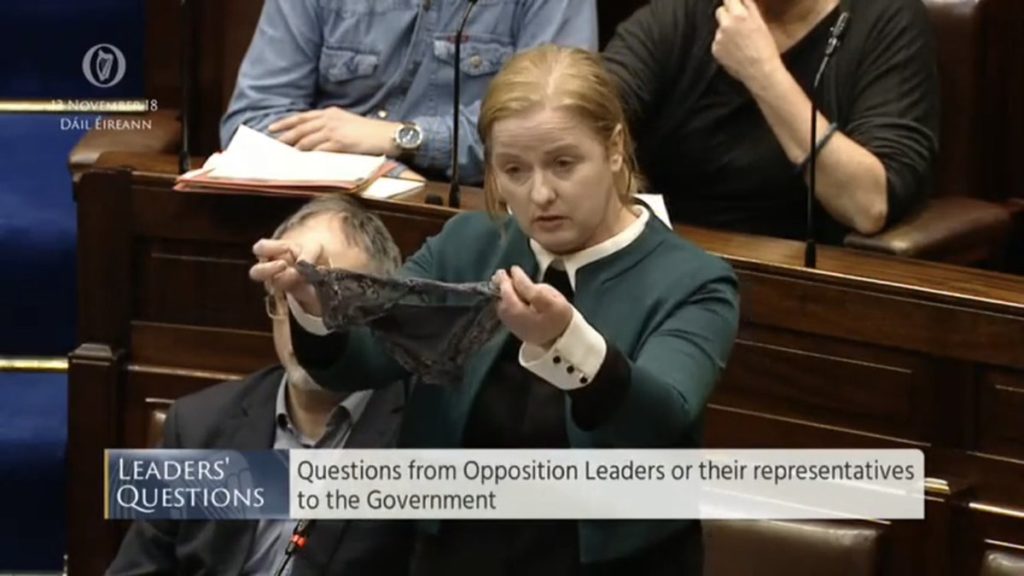 On Tuesday, Solidarity TD Ruth Coppinger raised the issue in the Dáil, holding up a black lace thong to illustrate her point. She said that “massive legal changes” are needed in the Irish legal system to dismantle the “routine victim blaming” that regularly occurs in sexual assault cases. “The women of this country are getting a little weary at the routine victim-blaming going on in Irish courts, and the failure of lawmakers in this House to do anything about it,” Coppinger said.

“Either the judiciary believes these rape myths, in which case they should be forced to undergo education, or lawyers are using them to introduce sexist stereotypes which they know resonate with some in society and on juries. I suspect the latter is the case,” she continued.

Taoiseach Leo Varadkar conceded that certain tactics in court should not be used in sensitive cases, and insisted that it was “never the victim’s fault”.

Ruth Coppinger’s comments in the Dáil set off a trend online, with women sharing photos of their underwear to protest the controversial comments made at the rape trial. The photos were to illustrate the point that the type of underwear a woman wears bears no effect on whether she will be sexually assaulted. The photos were shared with the hashtag #ThisIsNotConsent.

Women in Ireland are sharing photos of their underwear to protest victim blaming after a man was acquitted of raping a teenage girl pic.twitter.com/iPv7Q7JnEs

GP and Newstalk presenter Dr. Ciara Kelly became visibly angry while discussing the story on her lunchtime show this week, as a caller to the show accused her of undermining the jury’s decision. Kelly argued that she had done no such thing, and reiterated her point that a woman’s underwear was not an indication of consent.

Rallies have been organised around the country today to protest the comments of the Cork rape trial. The protests echo the #IBelieveHer rallies that took place after the Belfast rape trial earlier this year.

The protests, largely organised by ROSA (for Reproductive rights, against Oppression, Sexism and Austerity) will take place in three major cities: