NEW YORK, NY - MAY 04: Kanye West (L) and Kim Kardashian attend the "China: Through The Looking Glass" Costume Institute Benefit Gala at the Metropolitan Museum of Art on May 4, 2015 in New York City. (Photo by Mike Coppola/Getty Images)

UPDATE: Kim and Kanye West have revealed the name for their newborn son, and the choice isn’t something you’ll find in your standard baby book: Saint West. Yep, that’s the actual moniker they chose. Kim announced the news on her website tonight, along with her son’s weight: 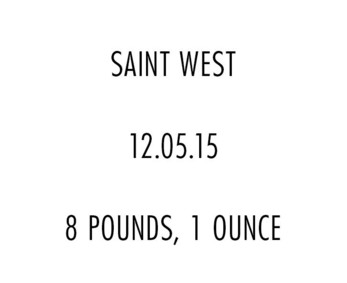 The reveal?comes after the couple shot down suggestions that they might continue what they started with North and name their son South – two days after they announced his birth. Another rumoured choice was Easton West, which we think might have worked, but we aren’t’so sure about Saint…

According to sources the reality star was said to have endured “a difficult birth” but mother and baby are now doing well.

What do you make of the name?

5/12/2015: He’s here!?Kim Kardashian just announced on her app that she has given birth to her second child with husband Kanye West. The announcement was short and sweet: 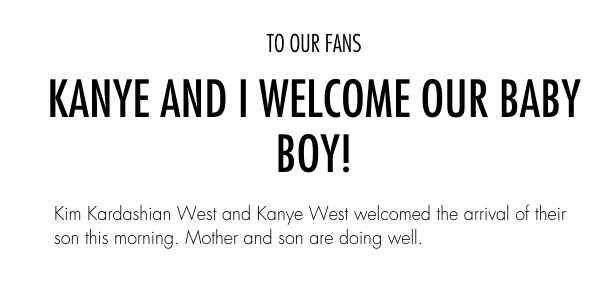 “Kim Kardashian West and her husband, Kanye West, welcomed the arrival of their son this morning. Mother and son are doing well.” No other details have been released as yet, such as the name of their new arrival, which everyone is waiting with bated breath to hear. However, the couple’s newest edition to their growing family arrived three weeks early, as the reality star was reportedly due on December 25th. We’d imagine the Kim is delighted with her new son (as are the rest of her family) and the fact that the pregnancy is over and done with; she’s frequently been reported as saying that the last nine months have been increasingly difficult for her. Many praised her for her honesty amid the pregnancy, as she didn’t gloss over her apparently tough experience. According to the Daily Mail, yesterday she penned a blog post on her subscription based website entitled Body Bounceback. “A few weeks to go and 60 pounds up!” she wrote. “I look at other celebrities and Instagram girls who are literally so skinny right after giving birth. How is that possible?!?!?F***, I hope people don’t expect that from me, lol!” You have to admire the woman for her honesty.

“I’m really not complaining, I’m just being honest about [it]. I hate it. You know pregnancy is not for me.?You know I’ve heard stories forever about how amazing pregnancy is from my mom and Kourtney and that’s just not the case for me, and I’m not going to sit here and lie and act like it’s the most blissful experience. It’s awful.”

However, perhaps the pregnancy’s not been as bad as we’ve been led to believe, as she also said that she’s already talking of baby number three. While chatting with her mother Kris Jenner on a recent episode of Keeping Up With The Kardashians, she spoke of her desire for a large family and said:?”Yeah, I’m not worried about after?I’m just worried about number three, that’s when your body really starts to slip. “Number three? Whoa! Can we just slow down and have number two,” Kris said.

We’ll have more news as we get it, but for now, we wish the Kardashian-West family well and send congratulatory words their way. We bet the little fella will be every bit as adorable as his big sister, North.