The end of a relationship isn’t always nightmarish. Some of the most poignant and moving words can be exchanged?when people break up, too. There’s a reason we never forget?the words to a moving?love song (basically any Adele track) or poem – we’ve all been there at one point or another, so such words resonate very deeply. ?Now a unique Tumbler project is attempting to lift the lid on heartbreak, and it makes?for an interesting and often emotional read.

Titled The Last Message Received, the viral project shows the final texts lovers exchange at the end of relationships, as well as messages from former friends and those who?passed away.

Some are overly sentimental, such as the flourishing sign off from one ex that declares: ?The most colourful sunset and highest snow capped mountains can’t begin to compare to you.?

Others are depressingly perfunctory: ?Yeah, good luck with uni and all that.” Certain words are downright horrid: “I just can’t be seen with someone who looks like you do. No offence lol.” Surely we aren’t the only people appalled by that message? 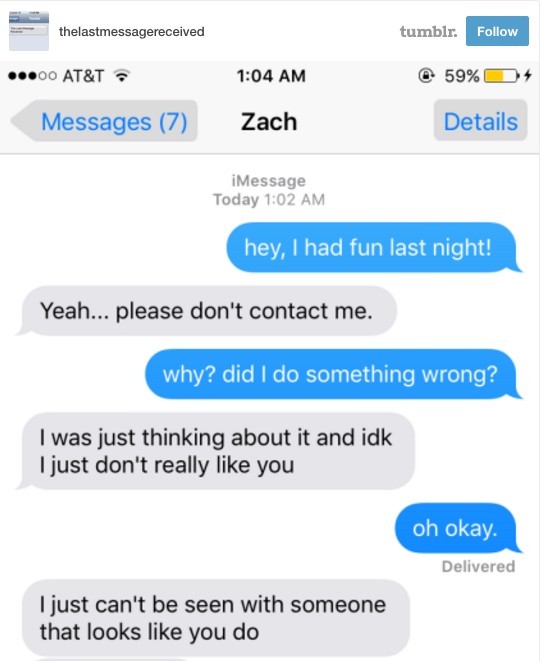 And some are just very, very sad. 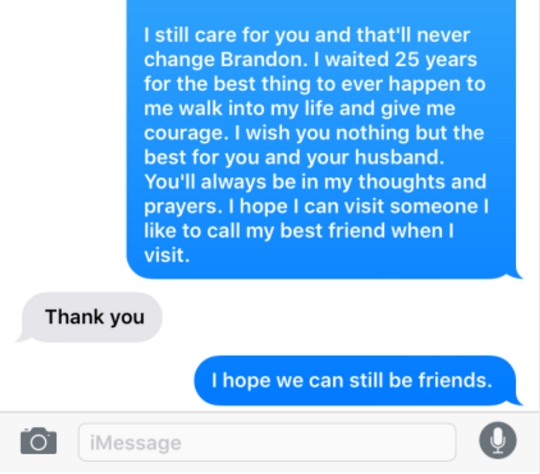 “We were the ultimate fairytale. Never fought, never hurt each other, always hand in hand. One day he just changed and walked out of my life. He married someone he just met, after knowing each other for a week. These were our last words, before I was to never hear from him again. I still love him and will wait forever, for The One.”

The Tumblr was launched by Emily Trunko, a 15-year-old student from Ohio.?”I’ve always been fascinated with glimpses into the lives of other people,? Trunko told BuzzFeed. ?I thought that the last message sent before a breakup or before someone passed away would be really poignant.?

And a few?of the most heartbreaking posts show the last conversation shared between friends before one of them dies.

“I feel sad,” one person texted to a friend. They explain in the accompanying note that, “At around 11 pm that night, I felt a wave of sadness wash over me out of nowhere. I highly suspect this was?when he died.”

And even the shorter posts are moving: 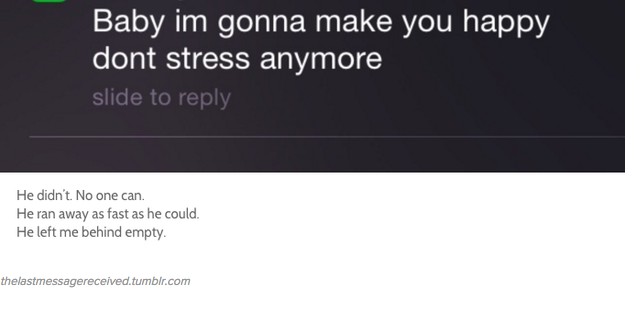 In a world where texting is the main form of communication for so many people, unfinished conversations can be?all too common. Trunko added that since creating the project, she’s become more conscious of her own text messages.??Every message I send to them could be the last one I ever exchange,” she said. “And every message I receive could be the last one I receive.? The posts have struck a chord with many since they appeared online. 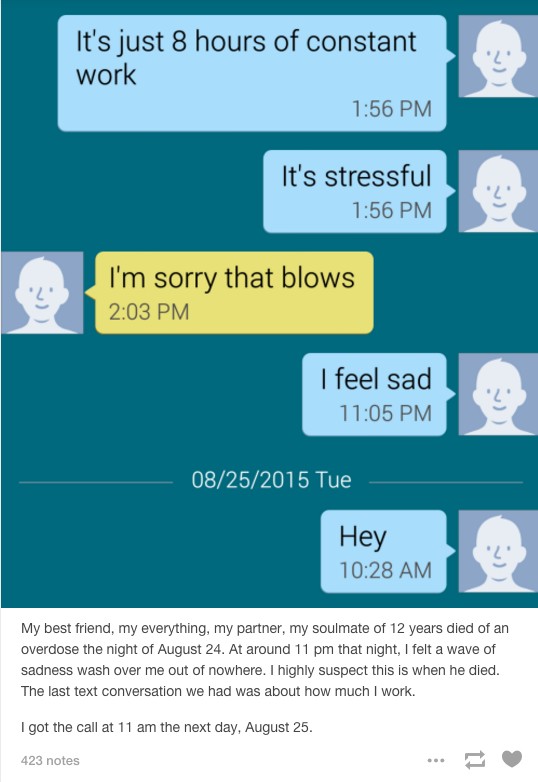 You can read many more posts on the Tumbler page here.

What do you make of the project?