Tonight’s the night. Families up and down the country are donning their brightest Christmas jumpers and Santa hats ahead of the RTÉ Late Late Toy Show 2018.

The long-running child-friendly version of the Late Late Show has become an institution; so much so there are toy-show-themed parties and drinking games (take a sip every time Ryan Tubridy says there’s ‘one for everyone in the audience’).

Most importantly though, it’s feel-good entertainment for adults and children alike. Whether a toy runs out of battery power, a celebrity walks on stage, or a young boy reveals he wants to be a horologist – you come away from the programme feeling happy.

As always, the details of the show have been kept tightly under wraps – until this morning. With just hours to go until the Toy Show kicks off, Ryan has revealed the theme. And it’s a good one.

The Greatest Showman, Tubridy’s favourite film of 2018, is the chosen one. Everything from the stage-set to the music will be based on the chart-topping movie.

“We think The Toy Show has become the greatest show of the year for kids, and it fits that,” Ryan explained. The Booterstown-native, who is celebrating his tenth year as Toy Show host, said it focuses on inclusivity. 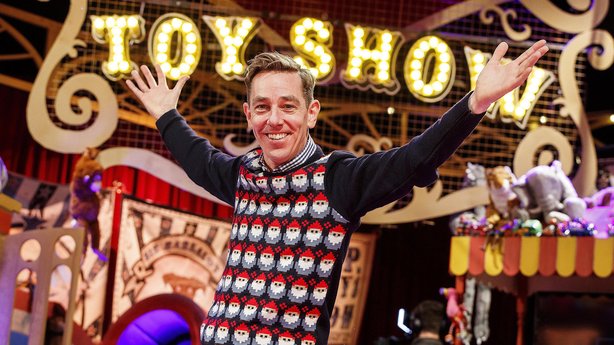 Photo by Andres Poveda via RTÉ

“The Greatest Showman has this lovely thing where it celebrates human beings who don’t look like everyone else,” he said. “I’m mad about that because I think there’s too much of an emphasis on being beautiful and being perfect and looking like everyone else.