Tonight’s ‘blood moon’ lunar eclipse: What is it and how will it affect you?

Some people firmly believe that lunar activity directly affects on the moods of humans and animals. Other’s believe that it provides nothing more than a visual spectacle of the workings of natural and astronomical brilliance.

Regardless of personal beliefs, every once in a while a celestial event takes place that unites both astrology and astronomy enthusiasts alike in excitement, and tonight’s blood moon is precisely one of those events.

What is a blood moon and why does it happen?

The blood moon is a rare celestial event in which Earth appears in a straight line between the moon and the sun. It is so-called because of the reddish/brownish color that is beamed onto it as a result of the sun’s rays being refracted by Earth’s atmosphere, causing a semi-shadow. This refraction of light is the very same thing that happens with red sunsets.

This eclipse is due to be the longest of this century; casting the Moon into shadow for one hour and 43 minutes.

Where and when can we watch it?

Here lies the bad news. Look outside your window and you’ll notice that the sky is looking pretty grey. This doesn’t look set to give up any time soon, so our odds of seeing this blood moon from our emerald isle are slim to none. It’s not all the clouds’ fault though, as we would have missed a considerable chunk of the eclipse anyway, what with the moon only appearing on our horizon from 9.30pm, several minutes after the spectacle is due to begin. 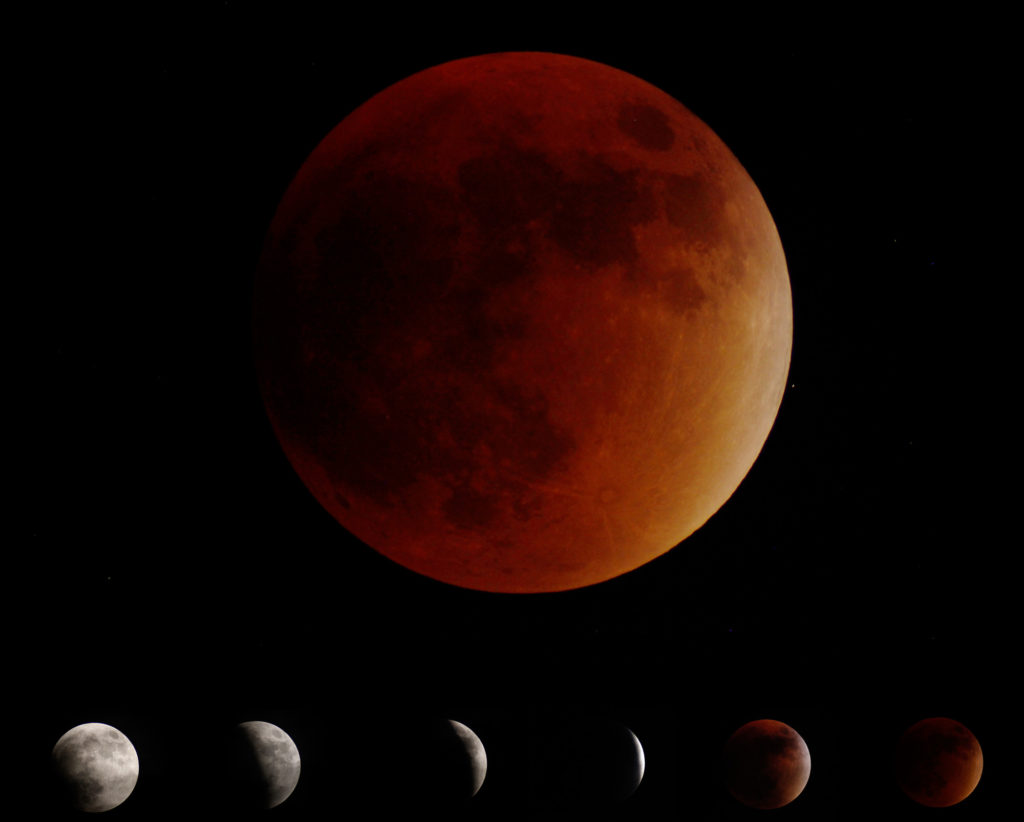 Will the blood moon affect our moods or behaviour?

The moon has long been associated with changes in human behaviour, with people reporting sudden, erratic changes in behaviour on specific days of the year as a result of a change in the lunar cycle.

But does this hold any substance, or is it just a bunch of conspiratorial and superstitious nonsense? We look at what both the astrologers and the scientists have to say on the subject.

According to Astrology King, Blood moons have the power to considerably alter moods; affecting people’s ability to communicate effectively and causing us to feel sudden, unexpected emotions.

“Like a regular full moon only stronger, a lunar eclipse focuses your attention on your emotions, intimate relationships, and your home and family. The longest total lunar eclipse this century is going to have an incredibly powerful influence on your private life”

Emotions and instincts reach their peak at a lunar eclipse, however, due to the current positioning between this fiery “blood moon” and planet Mars, the effect on humans is said to be particularly emotionally challenging.

In astrology the “moon conjunct Mars” position (which is the case tonight) is said to increase people’s sense of strength, sexuality and bravery. People may also find it difficult to control emotions during this period, and could start to feel irritable, irrational and overwhelmed for no apparent reason.

Aquarius, Capricorn and Leo are thought to particularly feel the brunt of the blood moon effects and may find themselves feeling especially tense and dramatic around this time. However, The Cut’s Madame Clairvoyant also holds that Leos should also expect to receive some good energy during this time.

In 2008, a study by researchers at the University of Oxford and the Ludwig Maximilian University assessed whether human behaviour and lunar cycles are connected. Their conclusion was a negative one; that there is little evidence to support the notion that there is an intrinsic link between the two.

Gill Roddie of Science Gallery Dublin, and owner of

?hl=en&taken-by=sciencesnapstories">ScienceSnapsStory Instagram account also recently reiterated that the lunar effect on people’s moods and actions has been investigated multiple times and “no quantifiable link has been found”.

Whatever you’re take on this evening’s celestial implications (or lack thereof), here’s hoping that the next time something like this graces our skies we’ll actually be able to see it.