Tom Jones Was Fired From The Voice

The weekend hasn’t got off to a good start for legendary singer, Sir Tom Jones. He took to social media last night to confirm that he had been axed from The Voice UK, and he wasn’t one bit happy about it. Jones slammed BBC executives, accusing the of ‘sub-standard behavior? as he revealed he was only told on Thursday he would not be returning to the popular show – the news was made public the very next day.

In a post on Facebook he said: ?In good faith, as part of the team, I’d put the time in my schedule to be involved in Series 5, as I’ve done so for the last 4 years. I’ve supported the show and the BBC since the beginning. I was told yesterday, with no consultation or conversation of any kind, that I would not be returning. ?

He added that he supported any kind of creative change, but was disappointed about the lack of duty and respect from executives on the popular show. 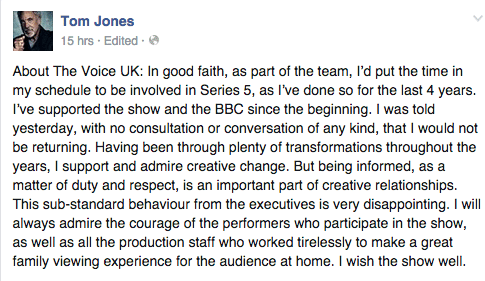 ?Having been through plenty of transformations throughout the years, I support and admire creative change. But being informed, as a matter of duty and respect, is an important part of creative relationships. This sub-standard behaviour from the executives is very disappointing,? he continued.

?I will always admire the courage of the performers who participate in the show, as well as all the production staff who worked tirelessly to make a great family viewing experience for the audience at home. I wish the show well.?

He also took to Twitter to express his disappointment over the decision, which he said he had ?no warning about.?

Paloma Faith and Boy George will join the show alongside returning coaches Will.i.am and Ricky Wilson for the fifth series of the singing competition.

Frankly, we’re disappointed to see that he won’t be returning. It’s always good to have a judge that has genuine talent and years of experience in the music industry to mentor inexperienced singers, and Jones has this in spades.