Woman have a lot of crap to put up with. When was the last time you looked in the mirror and disliked your reflection? Or deleted?your Facebook photo because you hated the way the light catches your curves? In contrast, when was the last time you left your house feeling super confident in an outfit that you’d spent ages putting together, only to be given negative remarks about how big your arms are or how small your bum is? Or that skirt you’ve been eyeing up in the shop window for ages, but you’re too afraid to buy it because your ‘friend’ told you that it probably won’t look good on you? And that time you were called “a solid 7” when you were trying to dance with your friends?

Jojo Oldham, 31, – a designer and artist from the UK – perfectly summed up the lifetime of sexism and body hatred that she has endured by creating and wearing a dress that contains all of the things people have said about her appearance; good, bad, or indifferent. The result was this loud, provocative, and eye-opening piece of wearable art. A closer look, however, reveals the humiliating jargon used to describe one woman’s?normal, healthy appearance?and is an important reminder of how seemingly harmless words can have a profound?effect on a person’s physical and mental wellbeing. 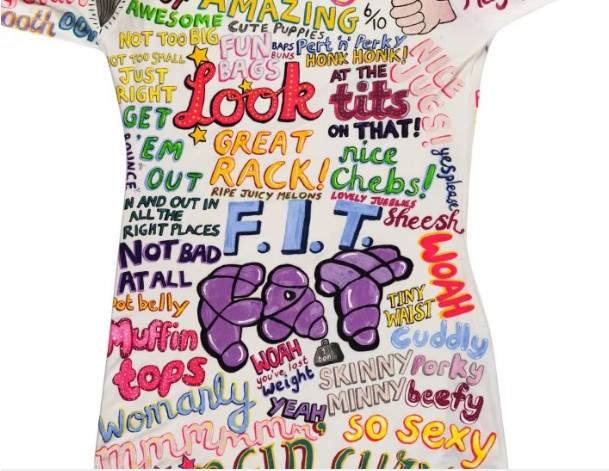 Speaking about her reasoning behind the dress, Oldham declared on her website that while the project, titled The Dress, is not an attack on anyone who ever commented on her appearance,?it is the result of a ‘modern woman finding peace with a body that she has not always loved due to gentrification and stereotyping.

“This piece isn’t an attack on anybody. It’s not a vanity project?or a pity party. I’m not trying to make people feel sorry for me just because somebody once told me I have thunder thighs, weird knees, sausage fingers and minging teeth. And I’m not looking for anyone to tell me that my arms really aren’t that big and butch, or that my thighs aren’t that chunky”, she said.

She explained she had difficulty accepting and loving her body; admitting to pushing it to the limit to fit into clothes and deleting photos of herself that she thought were unattractive?to look at. She recalls one of her many memories where her body was the subject of hateful and negative conversation:

“I was about eleven I went off to the local disco wearing quite a tight sleeveless shirt, a choker I’d got free from Just Seventeen (which I wasn’t supposed to read) and some leggings. In the car on the way there my friend told me I had big butch arms. It had never occurred to me to be self-conscious about them before, but as soon as I got to the disco I went off to the toilet, examined myself in the mirror and vowed never to wear that top again. I’d loved it just an hour earlier.”

Followed by; “a few years later, I was walking into a pub to meet some friends when a man at the bar nudged his mate to say ‘What about her, she’s a bit of alright’. Spotting my friends, I smiled and waved, and the man at the bar’s mate’s face contorted into a sneer and he said ‘Nah, she’s got horrible teeth’. Inside I screamed ‘yeah you’re no bloody oil painting yourself mate’ but I felt crushed. And tried not to show my teeth so much when I laughed.” 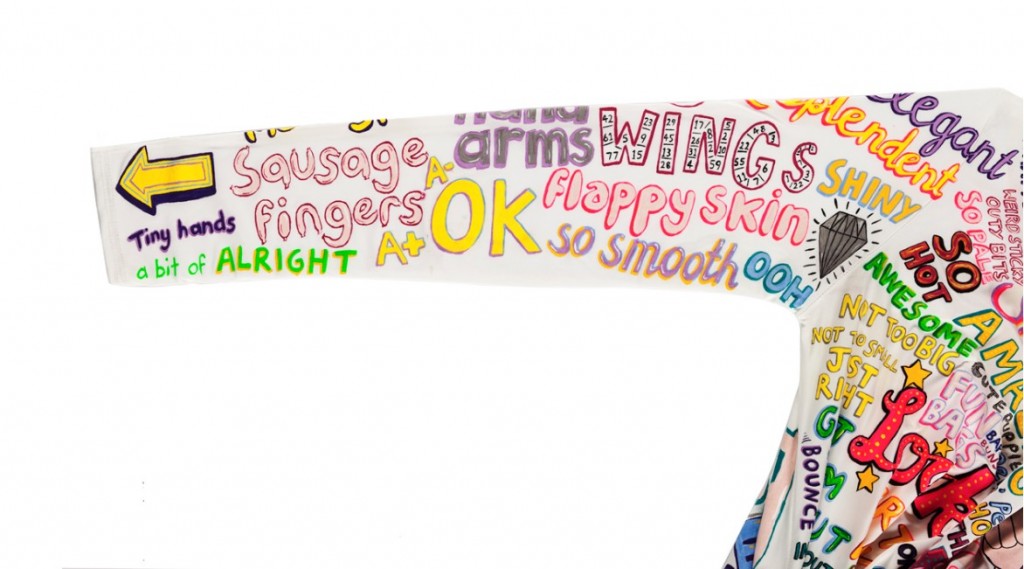 Publically slamming yourself might be an unusual way to spread a positive message, but Oldham’s expression of self-love – although quirky – is a gentle reminder that everyone is different and unique and she encourages everyone to feel as good about themselves as she does now, and that “we should all be able to celebrate and love ourselves without fear of criticism from others, whatever shape or size we are.”