Things Fall Apart: You’re not alone – everyone is dealing with the same stuff

The term ‘echo chamber’ takes quite a beating these days (as anything relating to Facebook probably should, you might say). But what if, to further use the parlance of our time, you intentionally curate your echo chamber? Your echo chamber, in this case, being your world, and the people you populate it with.

And so, instead of an echo chamber full of people reflecting back exactly your reality (or worse, those not close enough to really be allowed to see your reality), why not populate your echo chamber (again, your world), with a bit of everything? The same, the different, the opinionated, the supportive.

When things are bad, and it is necessary, if absolutely terrifying, to render change, sometimes to the point of tearing your entire life down from the rafters, or up by the foundations in order to make things right, having a well-populated echo chamber helps. Because if you are going to even contemplate bringing things down, then you need to be the opposite of isolated.

Related: The space that comes with separation doesn’t have to be scary

You need to know that there are people there who will help you through. Friends to whom you can tentatively admit that things are not as they should be.

It also helps to realise in the first place that things are not right. If you’re isolated off in your bubble of things falling apart, it’s surprisingly easy to convince yourself that everything is fiiiiiiiiinnnnne.

Rip off the plaster

Nobody wants to contemplate the idea that in fact, things might be so bad as to be terminal. I would, at this point, say to anyone who is currently faced with the sickening feeling of suspecting that they may be in this situation, that sometimes the ripping off of the plaster is the worst part. Once you’ve faced it, you might be surprised by your ability to deal with it. Whatever it is.

Sometimes simply being around other people, by osmosis you realise that things in your situation are off, purely by dint of seeing the rightness in theirs. On occasion, comparing yourself to others can be a help rather than a hindrance. The functional highlights the dysfunctional.

Later, an echo chamber can make you realise that you are not alone, other, the only one suffering. Fill your echo chamber and it will shout back at you. We’re all dealing with stuff. And underneath, whatever your particular burden may be (divorce, death, illness), much of what we are dealing with looks the same. Grief. Anger. Acceptance. Comings to terms with lives that have not gone as we planned. 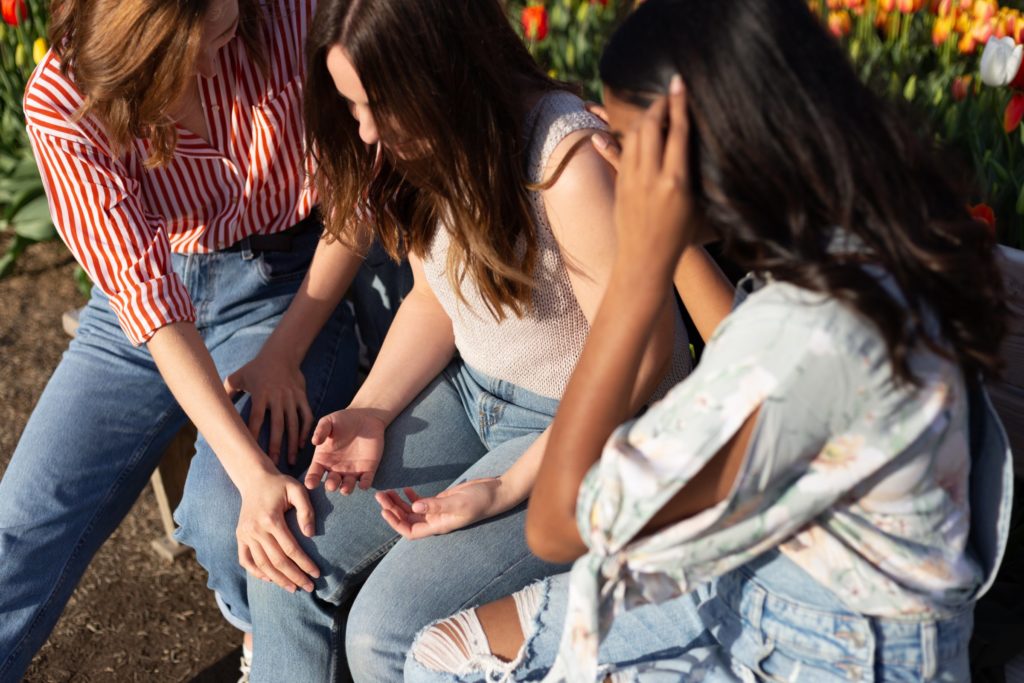 I say this as someone who talks to people about this as a job, as an interviewer. Whatever life has thrown at you, it all comes out of the wash looking the same, these same shades of things to be dealt with. Everyone is dealing with the same stuff. Having a well-populated echo chamber brings this home to you. And that is so helpful when you are in the midst of it.

No point in putting your head in the sand.

It would be easy to avoid families in different circumstances, say those where all parents live under the same roof. But it feels like that would be to live in denial. Surely acceptance has really come about when you can exist comfortably with those who have not suffered your loss, and feel yourself happy in your circumstances, not saddened by the comparison with theirs?

It’s a form of exposure therapy, courtesy of the friend who lives in a large, semi-detached house with a husband and four children.

It’s why I will teach my daughter to populate her echo chamber. Relationships may come and go. Always look after your friendships.

Read more: Things Fall Apart: Motherhood is a job worth being paid for

Read more: Things Fall Apart: The greatest loves of your life don’t always come in the shape of a husband

Read more: If your marriage is ending and your world has fallen apart, this letter’s for you