I suppose you could say I started on the boybands young. Too young to go to any of their concerts or understand what their lyrics meant but that didn’t curb my fandom. My bedroom walls were adorned with posters of floppy-haired boys in their late teens and early 20s that smiled down on me as I went to sleep. Take That, Boyzone and Backstreet Boys were — sorry — are my holy trinity of boy bands, with Robbie Williams, Stephen Gately and Brian Littrell competing for the role of my most adored. In my eyes, no one can come close to those fifteen boys that soundtracked my primary school days and playground games

Videos provided shirtless scenes in slow motion, with masses of water always finding a way to wriggle in to create ridiculous and mild flutters of erotica.

I was approximately five years of age when Take That released their fourth single It Only Takes a Minute and it probably took about 30 seconds to properly fall in love. Still in the stages of trying to be a British version of New Kids on the Block, the early days of Take That were club-focused  and they initially had that bizarre duality of appealing to prepubescent girls and gay men. It was all muscles, leather waistcoats, tank tops, cheeky winks, widened grins and rigorous dance routines. Videos provided shirtless scenes in slow motion, with masses of water always finding a way to wriggle in to create ridiculous and mild flutters of erotica.

A girl in our class went to the shoe shop that Ronan Keating once worked in! It was all too much.

By the time Take That released their fifth single A Million Love Songs, Gary Barlow took the reigns as lead songwriter for the group, leaning towards songs that pummelled sincerity rather than that raw sexual energy they once exuded. The golden run of singles Pray, Relight My Fire with Lulu, Babe, Everything Changes, Love Ain’t Here Anymore and Sure brought us up to 1994, the year that Boyzone would make their debut. Not only were Boyzone so cute and dreamy but they were Irish! They were one of us!  Our cousin’s neighbour went to school with Shane Lynch’s brother! A girl in our class went to the shoe shop that Ronan Keating once worked in! It was all too much. We knew more about these boys than the Take That boys, increasing our chances of actually marrying them. 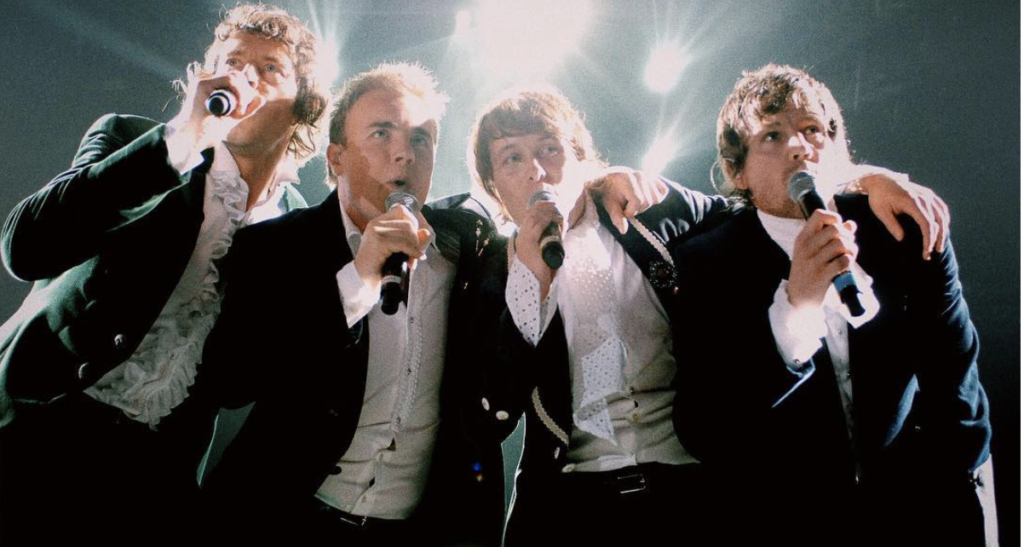 Being a young girl in the 90s

I had a Take That folder with a heart drawn in purple crayon around Robbie’s face and my best friend had a Mark Owen watch, which I thought was kinda weird at the time

A primary school girl with a crush is a terrifying mix of tears, tantrums, determination and a passion that you rarely get outside of professional sport. We no longer had just the five Take That boys to fancy, we now had ten – TEN! – boys to fancy; a new favourite for two weeks of school. I had a Take That folder with a heart drawn in purple crayon around Robbie’s face and my best friend had a Mark Owen watch, which I thought was kinda weird at the time. Looking back, it’s still weird. Before ever seeing a TV interview with Boyzone, I just knew that Stephen was kind and gentle. I knew he’d understand me and if I ever had a problem, he’d find a solution and solve everything without asking for anything in return.

This all sounds mental but imagine, if you will, what it was like to be a young girl in the mid-90s. There was no internet and our TV channels were restricted to BBC One, BBC Two, UTV, Ch4, RTÉ One and Network 2, as RTÉ Two was called at the time, with some homes just getting the two Irish channels. Our outlook was small and Take That and Boyzone were the measure for how attractive men could be. The outline of male attractiveness was defined by these rules:

But just as Boyzone were ramping up speed and setting our little hearts a-flutter, things in the Take That camp weren’t looking so cheery. Sure, they’d just released Back for Good, one of the greatest songs of all time, but during the promotional run for Never Forget, our Robbie started doing things like hanging out with Oasis’s Liam Gallagher, bleaching his hair and going to Glastonbury. Translation: he discovered drugs.

My classmate Hayley came up to me with big, wet eyes and we threw our arms around each other. For many eight-year-olds, this was their first experience of tragedy

On July 17th, 1995, Robbie left That That. On February 13th, 1996, Take That split up. I’ll never forget that morning in school. Walking across the big yard –  for I was now in second class and prepping for my first holy communion – my classmate Hayley came up to me with big, wet eyes and we threw our arms around each other. For many eight-year-olds, this was their first experience of tragedy and the pain was so harrowing that the Samaritans set up a specific helpline to help grieving fans.

If you thought a five-year-old with a crush was bad, well, you haven’t lived if have never heard a room full of fourth class girls screaming when  Nick Carter daringly asks “am I sexual?” in the pre-chorus.

But in the great big metaphorical house of boybands, as soon as one door closes, another window opens. Boyzone kept on growing from strength to strength but something bigger and bolder was coming our way. Even though they’d had slight rumblings in the charts with Quit Playing Games (with My Heart) and We’ve Got It Goin’ On, the American and very exotic Backstreet Boys would make a major impact in 1997 with Everybody (Backstreet’s Back). And if you thought a five-year-old with a crush was bad, well, you haven’t lived if have never heard a room full of fourth class girls screaming when  Nick Carter daringly asks “am I sexual?” in the pre-chorus. 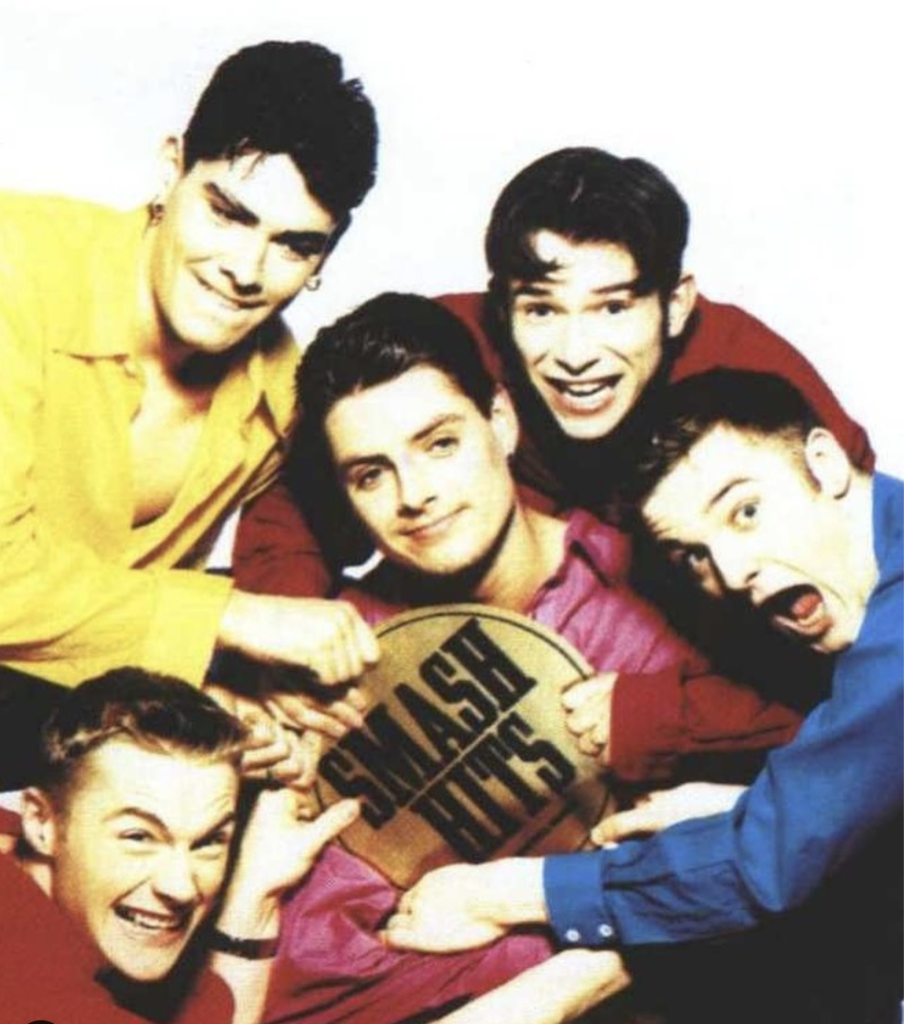 A funny thing with boybands is that it’s almost as if one has to pass over the baton for the others to succeed. In the same way that Take That folded so that Boyzone could fly, Ronan Keating would go solo from Boyzone in 1999 so that Backstreet Boys could have our full attention for the ultimate glow-up of their Millennium era which delivered I Want It That Way, Larger Than Life, Show Me the Meaning of Being Lonely and  The One. Such thrilling times.

In the history of boybands, no other period in time can compare to the run from Take That to Boyzone, Boyzone to Backstreet Boys. While many more boybands have come and gone (in memorium: 5ive, 911, A1, Another Level, Blazin’ Squad, Blue, Busted, JLS, One Direction, One True Voice, N*Sync, Northern Line…) and Westlife would go on to annihilate the Irish and UK charts,  this period of time was a frenzy and those three pioneering boybands danced shirtless under rain simulators so the others could do the bare minimal to succeed.

The thirst for boybands has certainly changed – One Direction barely had a dance routine or a silk shirt between them – but the popularity of Take That, Boyzone and Backstreet Boys still has a place in 2019. Take That’s comeback is well known to so many and it’s probably one of the most successful pop comebacks ever, measured by the fact that we want to hear 2006’s patience just as much as we want to hear 1994’s Everything Changes. Despite the very easy assumption that Boyzone called it quits many years ago, after 25 years together and almost ten years since Stephen’s tragic and untimely death, they are playing to an Irish crowd for the very last time in Dublin’s 3Arena on their Thank You & Goodnight farewell tour. Still going strong, Backstreet Boys are releasing DNA- their ninth album that’s actually quite good – this week, in the same month that Westlife kick off their long-awaited reunion into action.

They say you never forget your first but when it comes to boybands, my first three have left a sentimental mark on me that can never be removed. They were the vessels for our first crushes and with one key change, we are transported right back to that starry-eyed place in time.

‘Love Me For A Reason’: 10 reasons why I love Boyzone

Westlife are back (!!!) and this is why we’ve always loved them