The Next Super Moon Is Tonight – But Does It Really Affect Our Behaviour?

The next “super moon” will take place tonight when the new Moon will coincide with the Moon at perigee. The Moon at perigee is the point that Earth is the closest to the Moon’s orbit. Due to this close proximity, the moon looks bigger and brighter and, well, super.

While “super moon” usually refers to a full moon, this one – the first since 2009 – will be a new moon instead. ?However, ‘don’t get too excited about seeing it in all its beaming glory tonight as this super moon will travel across the sky during the day alongside the sun.

When these supermoons rear their heads, people swear that their behaviour is affected; be it that their sleep is disrupted or they dissolve into an unorganised mess, or that they just feel out of whack. Blaming your short fuse on astrology can be really handy.

So if you’re one of the believers, expect some/all of the following to supposedly happen over the next 24 hours…

1. Say G’night To Your Zzzzzzz’s

One of my IMAGE colleagues swears she can never get a good nights kip when a super moon rules the skies. However, it appears that this is definitely just folklore as no actual correlations have been discovered by science boffins. So if you’re wide-eyed in the early hours, it’s probably your glaring iPhone in your hand rather than the moon outside your window.

This could be the greatest news ever for some, and not so much for others. There has always been a strong belief that the moon and menstrual cycles are linked. And that a full moon can induce labour. Again, there is no scientific proof of this but it does stem back from times of early civilisation when the moon’s behaviour was often used as a method of contraception (not advised btw). 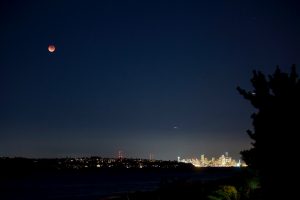 Again, back to myths and tales that we’ve all grown up with. The whole wolf-howling-on-top-of-a-dark-hill-with-full-moon-in-background isn’t exactly something that happens other than in bad movies. If the moon supposedly affects us so much, it’s no wonder then that animals also don’t escape scot-free. A link between the moon and animals has actually been established. Colorado State University’s College of Veterinary Medicine and Biomedical Sciences?has discovered an increase in emergency room visits for both cats and dogs when the moons at it’s fullest. Maybe keep the dog out the back tonight, just in case.

4. It Drives Us Crazy

We’ve all heard that a full moon can cause a bit of madness. Although cold hard evidence does not point to full moon = erratic tendencies, it is so ingrained in popular culture that surely there must be a grain of truth in there somewhere? The moon, nature, energy, it is all connected, as we are, to the Earth. This super moon will cause spring tides, and according to pyschicuniverise.com, this power that the moon has over Earth will intensify energies within us, particularly women. ?It promises that “tears and laughter will come more easily, moods will suffer extreme swings and there will be no shortage of drama?both good and bad.” Looks like it might be a bumpy?ride after all.