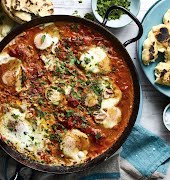 And now for the latest in the #FijiWaterGirl saga…

If you remember all that, you surely must remember the real star of the evening: Fiji Water Woman.

Related: The Fiji Water Woman is the real star of this year’s Golden Globes

She literally walked that red carpet serving Fiji water like she was born to do it. Any time a celebrity was in sight, she would, very impressively, appear with her Fiji tray held for all to see.

She became a meme.

And initially, she was fine with it.

Though the company said it hired Cuthbert to help hydrate celebs – not photobomb their individual red carpet moments, she insisted it happened by accident.

Cuthbert said in an interview that it was impossible to avoid the cameras from the middle of the pre-show action. “There is not just a camera – there are so many cameras that you are caught in the crossfire no matter where you stand. You’re just in somebody’s shot. You can’t avoid it,” she said.

The Fiji brand ambassador insisted the stunt wasn’t deliberate, nor did Fiji instruct her to angle her way into photo frames. “I’m telling you…at all of these different awards shows you can look back and find photos of other girls trapped in photos. It was just on another level.”

She is now suing Fiji for using her likeness to promote its brand without her permission, she claims.

She alleges the companies tried to capitalise on her popularity by launching a “worldwide cardboard-cutout marketing campaign based on the unauthorised use of [her] photograph, likeness and identity,” after cardboard cutouts began appearing in grocery stores the day after the awards show.

Cuthbert says no agreement had been reached between the two parties (and that doing this had generated $12 million worth of exposure for the company), so she was, therefore, filing a lawsuit.

The ‘Fiji Water Girl’ sues Fiji Water over unauthorized use of her image for a cardboard cutout campaign, Fiji Water hits back:

“This lawsuit is frivolous and entirely without merit. We negotiated a generous agreement with Ms. Cuthbert that she blatantly violated.” pic.twitter.com/AyRKd28UWR

Fiji Water disputed the claims, calling the lawsuit “frivolous and entirely without merit.”

“After the Golden Globes social media moment we negotiated a generous agreement with Ms. Cuthbert that she blatantly violated. We are confident that we will prevail in court.”

Cuthbert has not yet responded to their statement.