That’s The Way The Quinoa Crunches: Starting Up Homespun Foods

Entrepreneur and founder of the award-winning Homespun Foods Erica Sheehan on starting out, the food she can’t live without and why she gave up on juicing…

?Tell us about your ‘shower moment’ – when and why did you decide to take the plunge and set Homespun Foods up?

I’ve always been interested in food and nutrition but my eureka moment came while on holiday in California in 2012, with my boyfriend, now husband, Michael. ?During the trip, we were struck by all these amazing places in LA where you can enjoy seriously nutritious food that also tasted incredibly delicious.

At the end of our holiday, we felt really energised and positive after a month eating nourishing food at every meal. By the time the plane touched down in Dublin, I knew I wanted to quit corporate life and start my own health food business. I didn’t know specifically what I was going to do but I’d made the decision in my head and that mental leap is the biggest.

?I was actively casting about for ideas and at one point spent a fortune on a huge industrial juicer. After painting the kitchen ceiling green with liquidised’spinach, I decided that the juicing business was not for me! The idea for Homespun came from health food blogs such as My New Roots, which I take inspiration from. I’m a big believer in the nutrition benefits of plant-based proteins and I use quinoa a lot in cooking. I noticed blogs featured recipes for quinoa based cereals and snacks but there were no real products on the market. I started to develop my own recipes and that’s how Homespun came about.

What makes your product stand out? 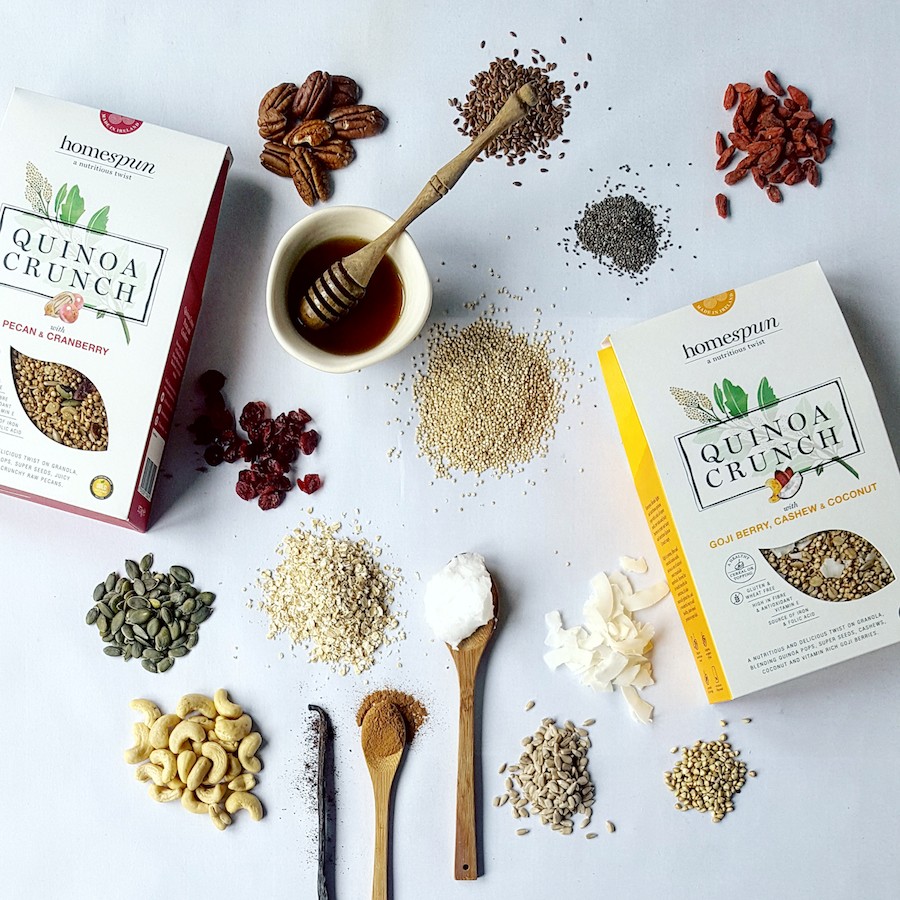 Quinoa Crunch is a nutritious twist on granola made from popped quinoa and other superfoods such as chia, flax, coconut and buckwheat. It makes a delicious healthy topping for yoghurt and porridge. It’s light, crunchy and full of slow release energy and is gluten, wheat and refined sugar-free. Sadly, commercial granola contains highly processed grains, sugar and additives, but that has created the gap for us. Ours doesn’t contain any cheap fillers or syrups and consumers often compliment us on the natural texture and taste.

At one point I spent a fortune on a huge industrial juicer. After painting the kitchen ceiling green with liquidised’spinach, I decided that the juicing business was not for me!

Your background is in business; how did this help in your overall journey? 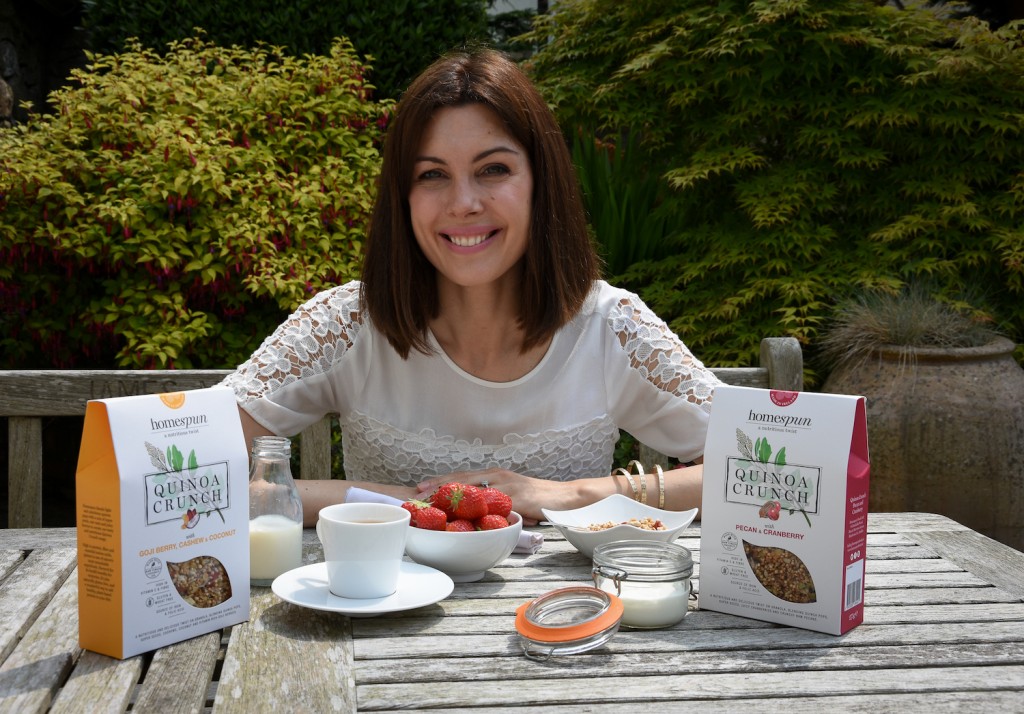 After graduating from Trinity in 2000, I worked in TV3 as a researcher and journalist, before switching into PR, so while I’ve had varied jobs, communication has been a common thread running through my career. My job has always been telling stories and being with people. Now with Homespun, I’m pitching to retailers and communicating with consumers, and it’s the exact same thing and I love it.

My journey has also been made easier through great supports I’ve been able to tap into from Enterprise Ireland, Bord Bia, retailers like Musgraves and my Local Enterprise Office. There’s also huge interest in healthier food now, and that’s given the business a lot of early momentum. From 5 stores last summer, we’re now stocked in 70 stores including Supervalu, Donnybrook Fair, Avoca, Fresh and health stores nationwide.

Clean Eating is’synonymous with healthy?food now – what do you make of the trend?

I don’t subscribe to this term really, especially when you see what’s marketed as “clean” – long life protein bars with artificial ingredients you’ve never heard of. I stick to real food and a diet of whole foods, fruit and vegetables with occasional side orders of good wine, cheese and chocolate! Food and nutrition has become unnecessarily complicated. The writer Michael Pollan summed it up well: “Eat food, not a lot, mostly plants.”

What are your five ‘desert island’ food products? 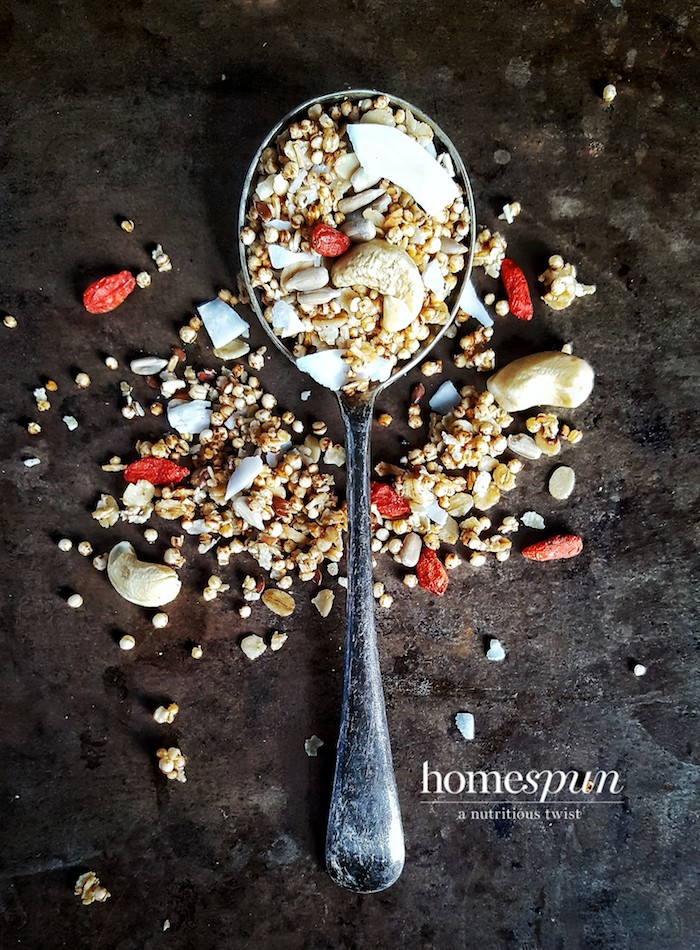 What’s been your biggest hurdle and highlight so far?

The hurdle: For me, the biggest hurdle of all has been the development stage – before I had a finished product in my hands. You’re working on the practicalities like sourcing ingredients and looking at shelf life and margins – it’s the unglamorous end. The hard work ever ends, but that development phase can be really challenging, and that’s where perseverance comes in.

The highlight: There are two. Homespun launched into Harrods Food Hall in January and that’s definitely a highlight! Harrods is our first UK stockist and to be in their stunning food hall alongside the world’s finest brands is surreal. Harrods is an incredible shop window in terms of promoting Homespun to the wider UK market and further afield. It’s got international recognition and hopefully more business will flow from it. A second highlight was when Homespun won Gold and Silver awards at the ?Free Food Awards? last July, not long after we launched. The judges said our range combined ?genuine nutrition, great taste and real innovation,? which felt great!

Plans for the future?

We’re fortunate to be getting great support from Supervalu who want to help us grow Homespun’s distribution. They are really supportive of local Irish food companies, especially ones in the health space. Through Bord Bia, we’re meeting retailers from other larger markets and hopefully, we will start scaling.

We’re also working on new product development – we’d like to create snack versions of Quinoa Crunch as our customers keep saying they want the same taste on the go, not just at home, which is nice to hear! Longer term, I’d like to see Homespun offering a much wider range of products blending plant-based proteins and other superfoods so consumers can enjoy delicious convenient cereals and snacks knowing they’re nourishing their bodies at the same time. They’re the things that matter to us.

Quinoa Crunch is available in various stores around Ireland and in Harrods in London. See homespunfoods.ie for full details.?