Alicia Vikander on the hint of Irish in her accent

Oscar-winning actress Alicia Vikander sat down with AISLING KEENAN to talk about the rebirth of an icon, feminism and where exactly that hint of an Irish accent comes from…

As the gathered journalists sit, awaiting the arrival of Alicia Vikander, there’s a promotional video of her newest blockbuster, Tomb Raider, on loop in the corner. Images of her training hard in martial arts flash onto the screen, her pull-ups drawing impressed nods from everyone in the room. Seated next to the door, I overhear a conversation probably not meant for my ears.

Vikander, dressed in a grey, silk blouse with wide- leg trousers and dainty gold jewellery, appears in the corridor beside me, meeting her co-star, Daniel Wu. They embrace like old friends, clearly having not seen each other since filming wrapped. Daniel jokes with Alicia, “So you’re a married woman now! He put a ring on it!” and she laughs, answering, “I know!” before an assistant moves them both to a more private setting, suddenly aware of their potential eavesdropper. Alicia’s lively reaction to Daniel tells me that her recent Ibiza wedding to Michael Fassbender is still a fresh notion, still a source of new excitement. Although, when it’s finally my turn to sit down with the Swedish star, she’s relaxed, reserved and looks much younger than her 29 years. She’s wearing minimal make-up – her flawless skin doesn’t need it – and as soon as she starts to talk, all eyes are on her. All ears too, with her soft speaking voice and mixed accent a magnet for those in the room.

Born and raised in Gothenburg, Sweden but now living with a rather famous Irishman in London, her lilt is hard to distinguish. I comment to her that I can hear a hint of Irish coming through, and she laughs, grinning widely and knowingly, saying, “Well, my sister has children with an Irishman, so…” with a hint of cheekiness behind it. Obviously not openly willing to chat to me about her recent nuptials, she’s adept at changing the conversation’s direction to suit. 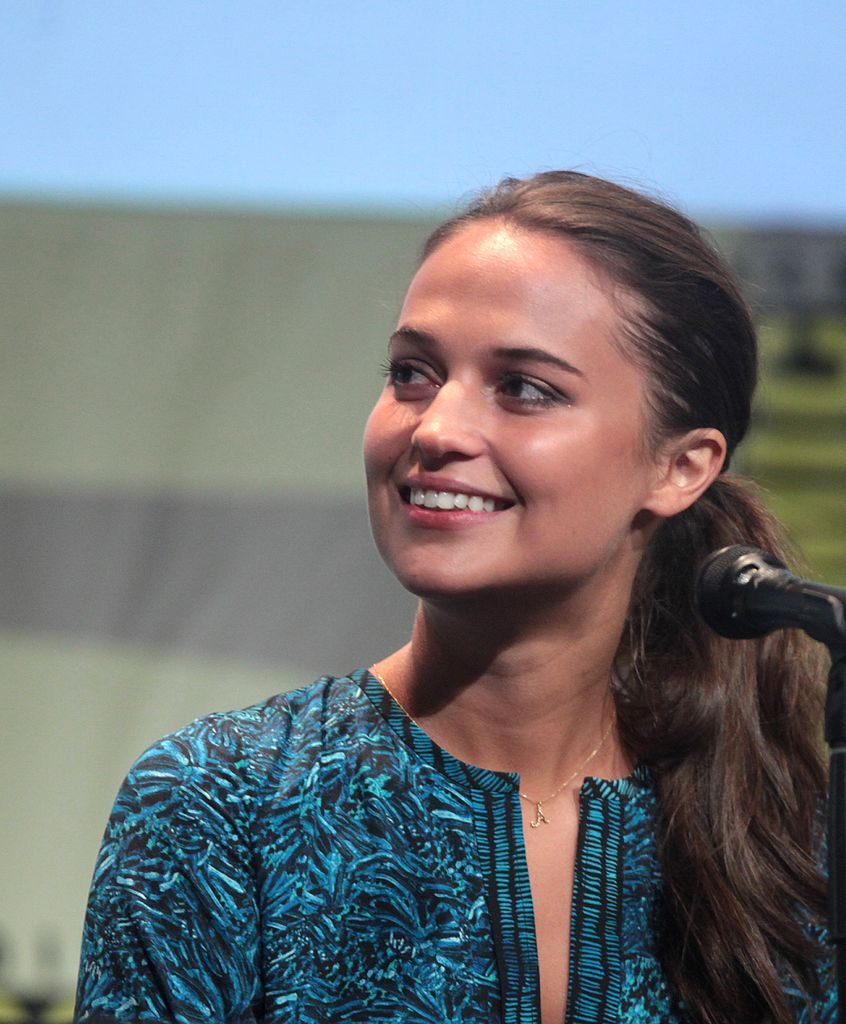 Vikander has come at the film world from every angle. While still maintaining a very non-Hollywood air of innocence, she deservedly won an Academy Award for Best Supporting Actress in 2016 for her role in The Danish Girl. That film was one of five she starred in the previous year, among them the critically acclaimed Ex Machina, in which she played Ava, a humanoid robot. Performing that role opposite Domhnall Gleeson, she may well have adopted some Irish turns of phrase during filming. “I’ve only been to Ireland once, actually. It is such a beautiful country. And you’re not the first to say that [about my accent].”

With some incredible films behind her, she certainly didn’t need an action blockbuster in order to be seen as having “made it”. But being a childhood fan of the Tomb Raider game, and with a Scandinavian director (Roar Uthaug) on board, taking on Lara Croft was a no-brainer for the actress. Talking about playing Tomb Raider as a child, Alicia says, “I would ask my female friends to play with me, and they’d be like, ‘What?’” Back then, there were precious few female protagonists, meaning little girls didn’t see themselves reflected in the world of gaming.

When asked if feminism is important to her, she says, “Eh, yes!” emphatically – clearly this is a question she feels has a blatantly obvious answer. When I talk about whether Angelina Jolie’s original Lara Croft was “typically” sexy, she tells me that the idea of being “typically” sexy means nothing to her anymore.

“There’s an awareness and change in that people feel like they can speak up now. The ripple effect is not only being felt in the entertainment industry, it’s happening everywhere.”

With her views on feminism the topic at hand, I bring up Harvey Weinstein. As a woman in Hollywood, she has strong feelings on the upheaval the recent wave of revelations have caused in her industry. “Like everyone else, I was extremely shocked when that news came out. Since then, I’ve been extremely proud of, and have looked up to, all the women who have spoken out. Just this morning, I went with almost 700 Swedish actresses in a group and we made a statement together.

“I feel like there’s an awareness and change in that people feel like they can speak up now. People felt embarrassed, or that it was just part of their work environment, which is horrific and disgusting. The ripple effect of it is not only being felt in the entertainment industry, it’s happening everywhere. Although none of my close friends are in this industry, it’s as much a revolution for them as it is for us.” 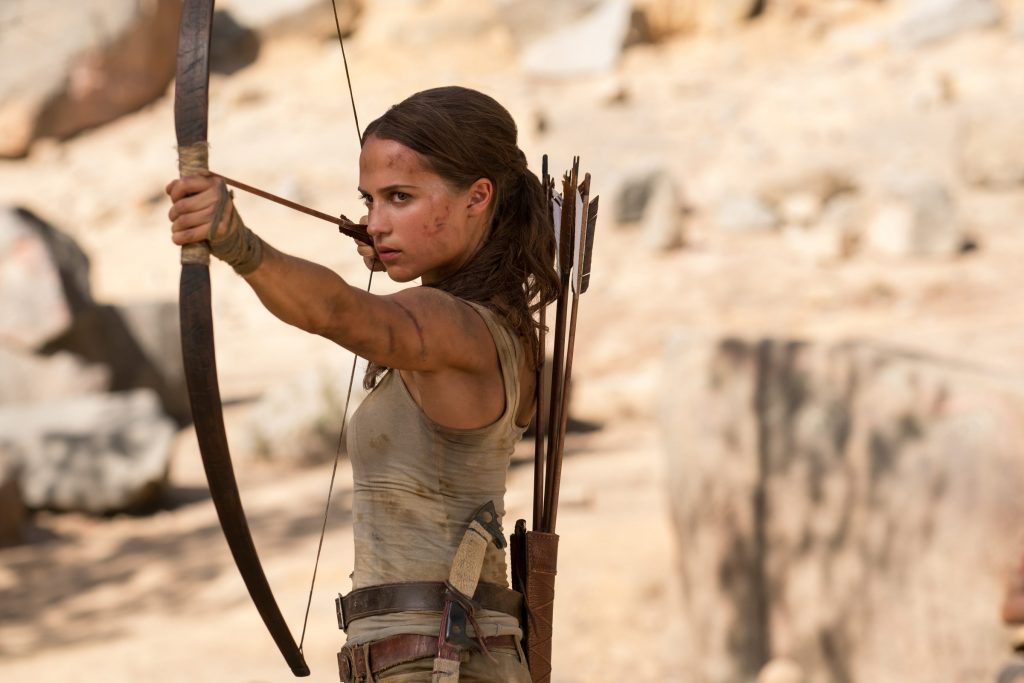 It feels as though her mentioning that her close friends aren’t in the industry is on purpose. In spite of the fact that she’s the face of Bulgari jewels, and she stars in Louis Vuitton campaigns annually, she still comes across as endearingly normal and somewhat vulnerable. Talking about visitors to set during filming, she says: “Once we had a day when, um, social influencers, I think they’re called? I’m not sure. Anyway, these expert online gamers came to visit us and I was terrified!” She also admitted to not being entirely comfortable with the big budget movie environment. “Coming from a small country, you never think you’re going to be on a set with 400 people making these sort of action sequences you fell in love with as a kid.” Her references to her family, friends and childhood throughout the interview make her easily relatable – a trait that no doubt endears her to casting directors and co-stars alike.

“It’s changing, what we as a society find sexy. I want Lara Croft to be sexy, but also fierce, cool, witty, funny – someone you want to hang out with.”

Daniel Wu, who is a megastar in his native Hong Kong, stars opposite her in Tomb Raider. He gushes over her ability as an actress, and seems genuinely happy to have run into her in the corridor. He also admits he was surprised at her bravery on set when it came to stunts. “She was so impressive. Such a great actress, so dedicated, so hard working. She’d be in the gym at 5am every day for an hour and a half before going to set. I never work that hard! And she’s totally fearless, doing these big jumps without saying anything.”

Clearly, the concept of being a diva is far from her mind. Perhaps her training in ballet, which she says is “a commitment that is beyond anything I’ve seen in my life”, prepared her well for her life as an actress? “In life, when things have been tough,” she ponders, “I always come back to think, ‘Well, it’s not as tough as it was training in ballet.’ Because of that training, even though I didn’t pursue it into adulthood, I love the process of training. It helped me to change my physicality, which took a lot of work, but I wanted to learn as much as I could and do as many of my own stunts as I could. However… I have a superpower. I am very good at napping. I could lie down anywhere and fall asleep within two minutes,” she laughs.

I finish by asking if she’ll be visiting me in Ireland, a loaded question. “Well… Yes. It’s a very beautiful country,” she offers. With a glint in her eye, and her publicist tugging at her arm, she gets up to leave. Successfully deflecting questions about her very Irish link is a skill she’s mastered along with her weightlifting and pull-ups, but I’m still left absolutely charmed. Alicia is the type of woman you’d imagine loves long discussions about the Bechdel test with friends over wine, and who just wants to work hard and achieve success in her profession. Admirable traits, by anyone’s standards.

This feature originally appeared in the March 2018 issue of IMAGE.