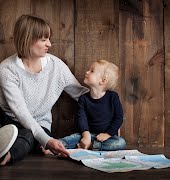 The Tiger Who Came to Tea

The Tiger Who Came to Tea

When Liadan Hynes’ marriage fell apart she had to work on adjusting to the new reality. In her weekly column, ‘Things Fall Apart’ she explores the myriad ways a person can find their way back to themselves

Are you even a person who comes into regular contact with children if you got through Christmas without watching the animated version of The Tiger Who Came to Tea?

Scratch that — proximity to children isn’t required to have watched what might be the pinnacle of all-time-ideal-things-to-watch-around-Christmas (although proximity to children might mean you watched it more than once, given their immense capacity for repeated viewing of favourite shows; our current count is five, that I know of; my daughter’s grandad may have been subject to some additional viewings).

The book was the first my daughter owned, actually given to me by my parents when I was pregnant. “Why isn’t my name on it?” she enquired recently, put out at the inscription to me, written the Christmas before I had her.

Like the book, the TV adaptation evoked exactly the kind of cosy safety you want from your Christmas viewing. A small world that barely ventures beyond the four walls of Sophie’s home. In fact, often we don’t even get as far as the walls, all that is depicted is the kitchen table at which she sits with her mother and their copious baked goods. Maybe a shelving unit floating in the background, certainly nothing as definite as a wall.

It’s ridiculous, given she is a fictional character referred to only as Mummy, and one who is contending with a tiger in her kitchen at that, but quite regularly last year I found myself envying the work-life balance of the mother from The Tiger Who Came to Tea.

Her ability to just focus on one thing at a time.

Looking after her daughter.

Granted this also seemed to come with having to put up with Daddy arriving home and taking immediately to his favourite armchair, before being served dinner and restaurant-level choices of desserts, while she kept things going on the domestic front by doing bath time.

But the ability of the woman to focus just on the task at hand?

God, I envied it in comparison to what my own day-to-day often feels like; constantly racing from one thing to another with a feeling of always being on the verge of lateness, juggling three to-do lists which never, ever, get completed, instead simply added to.

If there are baking sessions, I invariably begin to regret not simply having shop-bought and sat and enjoyed the cake together, and always discover halfway through that we are missing some essential ingredient or tool.

I’m fully cognisant of the ridiculousness of envying a fictional woman. But really, isn’t the true fallacy believing in work-life balance in the first place?

I don’t think work-life balance is something men are ever expected to strive for, and so they never have to feel like they are failing when they are unsuccessful in achieving it.

Could it be that work-life balance is just another one of those goals put in front of women that was never really achievable, but that many of us would torment ourselves trying to master anyway?

Shades of ‘well, yes, you can go out and work too, but you also still need to do all the other stuff. But that’s a good thing. It’s called achieving work-life balance. Now go. And don’t look back, or up and around you, and wonder why women are still doing more of the life admin/domestic stuff’.

Like moulding ourselves into a certain body shape, we will inevitably “fail” at both, and then feel bad about ourselves for the alleged failure.

Never questioning whether it was, in fact, a doomed effort from the outset. Or whether it was even worth pursuing in the first place, in some cases.

We’re still at that part of the year where it is possible to imagine you can achieve a sense of balance. Where you can sit back and see the parts of your life that cause you to feel like a gerbil on a wheel and tell yourself that this will be the year you plot things out perfectly, and never feel overwhelmed, exhausted.

As a self-employed single mother, I’m coming to accept that actually, instead of balance, the way of things is more like a repeated sequence; things get really busy, it feels like all work, all chasing of one’s tail, and then it passes and there is a quieter time. And then it all starts up again. Judging by other friends who are also self-employed, this feels more like a freelance thing, than a single mother thing.

In fact, if anything, being a single parent allows you off the quest for work-life balance. Things aren’t meant to feel balanced when you are a single parent. You sort of expect a see-saw of extremes. All, then nothing. You don’t really engage with the (pointless, I would suggest), struggle for balance. You learn to roll with it.

Which is why last week, instead of chasing after some elusive work-life balance, I decided the one thing I could control that would make that first week back more manageable, would be more sleep. It’s boring sometimes, going to bed every night at eight with my five-year-old daughter, but that’s what I did. And sometimes it’s the loveliest thing; lying in bed reading while my daughter sleeps beside me.

Weekend nights I did the same. And on Saturday afternoon, when at the last minute a friend asked if she was free to join an outing with their little daughter, her friend, off she went, and back I got into bed.

“It’s an amazing day, you have to get out in it,” Instagram carolled from various parks and beaches and I rolled over in bed, started a new book, and promptly fell asleep within two minutes.

“Only thing for it, I’ve taken to the bed,” I replied, finishing off the box of Ferrero Rocher we had opened the night before for movie night. “It is glorious.”

Photo: The Tiger Who Came To Tea, Judith Kerr

Read more: Digital devices are a lifeline for a new mother

Read more: Things Fall Apart: I watched Marriage Story so you don’t have to