Isn’t it great that actresses in Hollywood have decided to come out fighting against and shouting about the gender pay gap in the industry? Jennifer Lawrence talked about her much-publicised shafting in a letter for Lena Dunham’s newsletter Lenny, writing,

?When the Sony hack happened and I found out how much less I was being paid than the lucky people with dicks, I didn’t get mad at Sony. I got mad at myself. I failed as a negotiator because I gave up early.?

Her confession opened up a proper conversation. The media listened, devoting headlines to the subject. Then Bradley Cooper chimed in to support his frequent co-star and actors? behaviour in the negotiating process was questioned.

The latest big name to join Lawrence in talking about her personal experiences is fellow Oscar-winner Sandra Bullock, whose next movie Our Brand Is Crisis lands in cinemas next January. The Gravity star recently spoke to Variety about the unequal pay issue, saying that as far as she can see, the imbalance when it comes to pay cheques is just symptomatic of sexism in Hollywood as a whole.

“It’s a bigger issue than money. I know we’re focused on the money part right now,? she said. ?That’s just a byproduct. I keep saying, ?Why is it that no one is standing up and saying you can’t say that about a woman?? We’re mocked and judged in the media and articles. Really, how men are described in articles versus women, there’s a big difference. I always make a joke: ?Watch, we’re going to walk down the red carpet, I’m going to be asked about my dress and my hair?while the man standing next to me will be asked about his performance and political issues.? 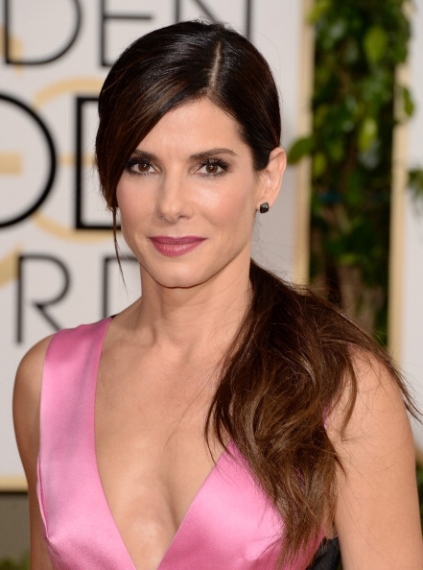 ?Once we start shifting how we perceive women and stop thinking about them as ?less than,? the pay disparity will take care of itself,? she continued before referencing the Sony hack which revealed Lawrence’s salary. ?There’s a much bigger issue at hand. I’m glad Hollywood got caught.?

It’s an insightful interview and Bullock is being honest on a level we rarely witness. She even opened up about how scared she was for her career as she aged. Despite her empowering upbringing she freaked out while filming an unnamed movie a decade ago.

?I?found myself yelling and being angry,? she said ?And I was like, ?What is happening to me?? I was literally fearful. And I realized, it’s because I’m female. It dawned on me. At that day and age, at that point in my career, it was the worst experience I ever had.?

She then talked about how she hopes real substantive change is on the horizon, for the sake of her son Louis.

?How do you explain to your son that the ERA hasn’t passed? I want him to think I’m the boss and women are equal, but I can’t really support that in the outside world. I hope in my lifetime, for him, everything is a level-playing field. We can hope.?

Don’t know about you, but we got tingles reading that. Sandra for real life politics as opposed to onscreen ones?