On Tuesday night, RTÉ Investigates looked back on their coverage of the HSE’s treatment of families who dare to challenge or even criticise the system. The general consensus among viewers is that little has changed and the cases highlighted are all too familiar

In a replayed episode of RTÉ Investigates on Tuesday, the investigative team examined how complaints are handled by the HSE. They highlighted five cases in which family members challenged the standard of care provided to their loved ones – and in each case, the response was unnervingly similar.

Despite ‘Your Service Your Say’ being the bedrock of HSE public policy; and despite the National Healthcare Charter saying, “Your feedback matters – tell us about your experience so that we can have your concerns addressed”, this did not apply to any of the five cases documented.

Anne Fitzgerald, a mother-of-five from Dublin, slipped on ice while putting out her wheelie bin at the age of 62. She banged her head off the ground and suffered a life-changing brain injury, which resulted in her being admitted as a longterm resident to Cherry Orchard hospital.

However, as time went on, Anne’s husband Patrick began to notice lapses in her care. When a scheduled physiotherapy appointment was missed, he wanted to know why. Rather than addressing his concerns, staff made complaints about him in return, saying he was demonstrating aggressive and abusive behaviour (allegations Patrick rejected completely).

In the end, his visiting hours to the hospital were cut, significantly limiting the time he could spend with his much-loved wife.  The hospital also hired a security guard to keep watch over the ward.

Since the show first aired on RTÉ, both Anne and Patrick have sadly passed away. 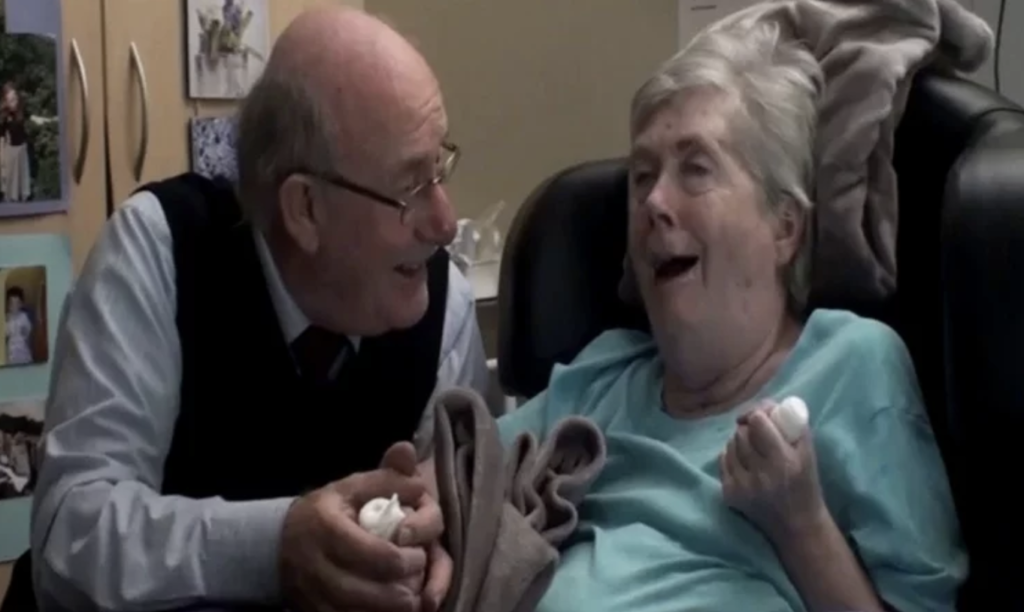 Lourda Finn’s experience of complaining to the HSE was incredibly similar. Her late father, Gerard Finn, was admitted to Cappahard Lodge Nursing Home with Alzheimer’s. However, upon noticing extensive bruising on their father’s body, she and her sister confronted staff and even reported their concerns to Gardaî.

Just like Patrick Fitzgerald, Lourda and her sister were accused of being abusive themselves. They also had their visiting hours restricted, to the point that they couldn’t be with Gerard when he passed away. On that fateful night, both women were asked to leave the care home at 10 pm. Their father died just a few hours later.

It wasn’t until six years later, following a long fight for justice and an examination by the Ombudsman, the HSE finally issued an unreserved apology.

Another person said, “Experienced this too, sadly. We had to move a family member out of a facility. Total sh*thole. Unfortunately, an ethos of care is not a prerequisite for calling yourself a care facility.”

Experienced this sadly too. We had to move a family member out of a facility. Total shithole. Unfortunately an ethos of care is not a prerequisite for calling yourself a care facility. #rteinvestigates @HSELive

Many others said the HSE should be ashamed, while also commending the families for fighting for what’s right. “Good on the families of Patrick Fitzgerald and Lourda Finn for fighting the HSE,” one person commented on Twitter. “Shame on the HSE to smear good people to cover their tracks. The truth always comes out.”

It was also noted by some viewers that, while this was a repeat episode, very little has changed since it first aired. “There are so many stories like the ones we’ve seen tonight,” one viewer said. “I know this was a repeat. But nothing has changed. Not many people are as brave as those in the documentary. Lots are too afraid to speak up because they are scared for their vulnerable loved ones.”

This episode of RTÉ Investigates: Troublemakers is available to watch on playback here.

Read more: How to get a good night’s sleep, according to an Irish sleep expert

Read more: Eczema: All you need to know about the chronic skin condition