Another day, another controversy involving Rihanna. Fresh from that sheer gown at this week’s CFDA awards ceremony – see the skinny from Image Daily on that old chestnut here – and her banishment from Instagram because of shots of her topless on the cover a French magazine, it seems Rihanna’s body brings with it a neverending round of scandal. This time the Advertising Standards Authority in the UK has deemed the print and poster advertisement for her new perfume as ‘sexually suggestive? and declared it should not be displayed in areas where children are likely to see it. 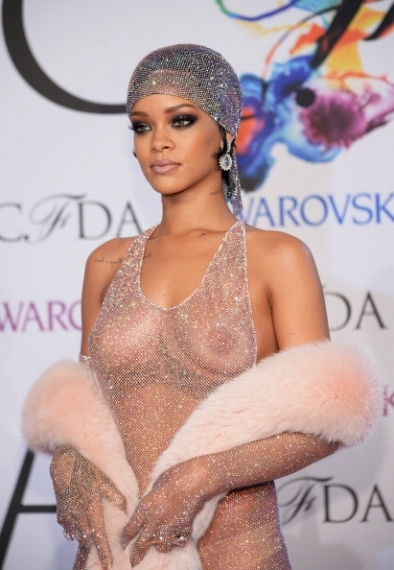 The image of an apparently naked Rihanna resting her raised legs, clad in the highest of heels, against a bottle of her upcoming Rogue scent prompted one person to complain it was offensively sexual, demeaning to women and not suitable for children to see. Parlux Fragrances, the company creating Rouge, defended the ad claiming the nudity not improper and the image was not offensive, suggestive or demeaning.

The advertising watchdog conceded on these points, noting that Rihanna had a facial expression “of defiance rather than vulnerability” and her supposed nudity was actually covered up. However the authority did issue ?a placement restriction to reduce the possibility of it (the ad) being seen by children.? They continued, “While we did not consider the image to be overtly sexual, we considered that Rihanna’s pose, with her legs raised in the air, was provocative.?

We suspect Rihanna is filing this whole week and all the accompanying press clippings in the DGAF chapter of her memoir.