Movie review: Quentin Tarantino’s Once Upon A Time… In Hollywood

The auteur director’s 9th film – with apparently only one more to be his last hurrah – is his most personal. A sentimental take on an era that will never be again, a blend of fact and fiction – and refreshingly, one that is a love letter to the legacy and memory of Sharon Tate, writes Jennifer McShane

Used in the most positive of ways, meandering is a fitting way to describe the pace of Quentin Tarantino’s Once Upon A Time… In Hollywood. It’s a narrative which takes its time – he is in no hurry as he leisurely unfolds his variation of late sixties Los Angeles, broken down to fit his obsessive variation of the zeitgeist.

It’s his most personal film in years; one full of his own yearnings and anxieties. For the Hollywood that was, for what it might have been and for the promise that it once held. 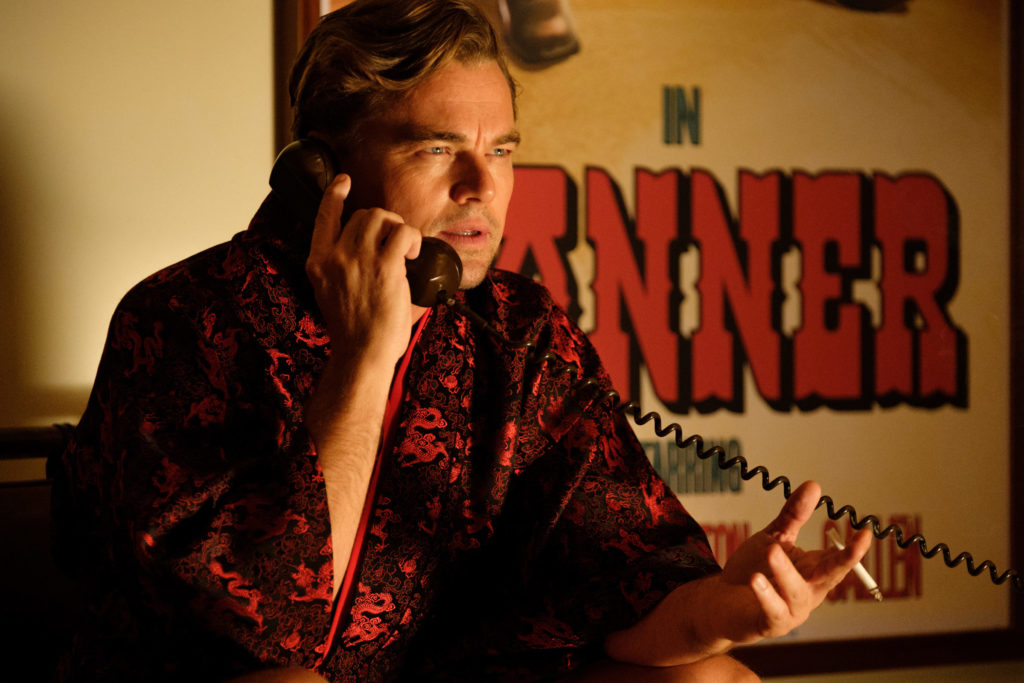 It’s here we meet Leonardo DiCaprio’s Rick Dalton, an actor past his prime, guest-starring in other people’s TV shows, feeling out of touch emotionally and culturally. Like Tarantino (we assume), he fears his best days have been and gone and what will the future hold if he can no longer be relevant? It’s a career-best from DiCaprio who generates some of the best laughs in the film – and make a note to remember that flame thrower.

Related: The problem with the obsession over Charles Manson’s ‘girls’

In contrast, Dalton’s best and only friend, his stunt double Cliff Booth (a brilliantly cocky and when occasion calls, menacing Brad Pitt) takes a more relaxed approach: he knows his glory days are behind him thanks to some questionable choices in his past and seems content to act as a chauffeur to an unstable Dalton.

Both characters meander from place to film set, fixing TV antennas, challenging Bruce Lee or picking up alluring hippies to drive back to what would have been Charles Manson’s infamous ranch. 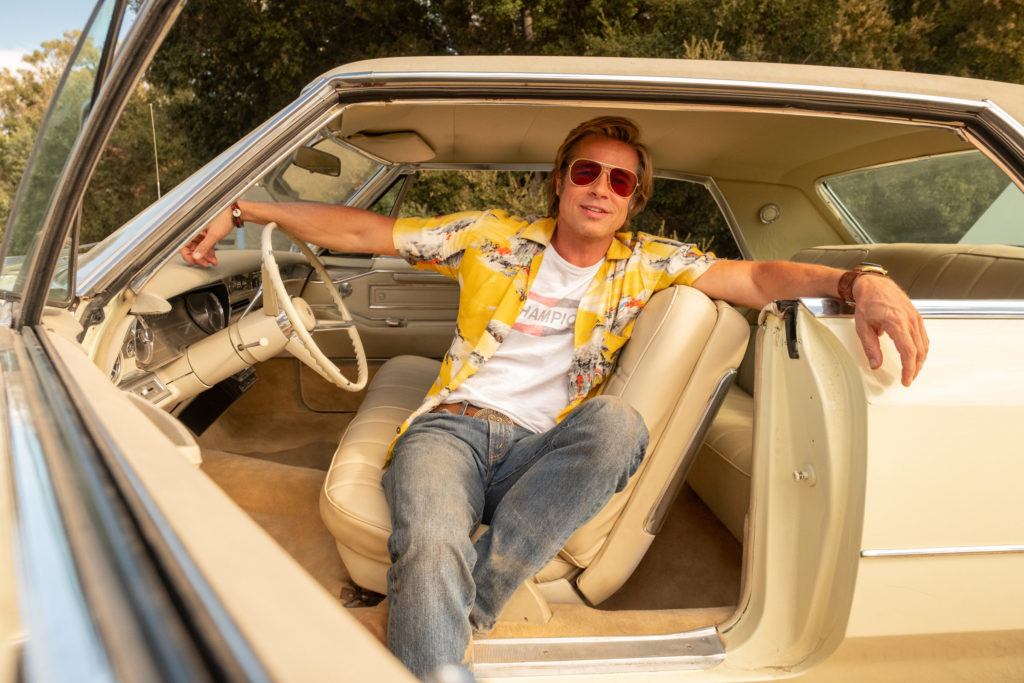 It’s a genius casting move. Arguably two of the most famous actors in the world playing two losers. And it works like a charm.

Margot Robbie is luminous as Dalton’s next-door neighbour Sharon Tate (this fact alone is enough to render him star-struck and misty-eyed). Tate and her husband director Roman Polanski were the ‘it’ couple of the late sixties and Tarantino uses this opportunity to give us a glimpse at her more closely. It’s true, she doesn’t say much but her presence is always felt.

Untainted by cynicism, her sheer joy of life, at seeing herself on screen – it’s quite something to witness her enter a movie theatre to watch herself in The Wrecking Crew and revel in the laughter of the audience.

We have Margot as Tate watching the real Sharon Tate in the scenes on screen. The effect is immensely moving to witness. 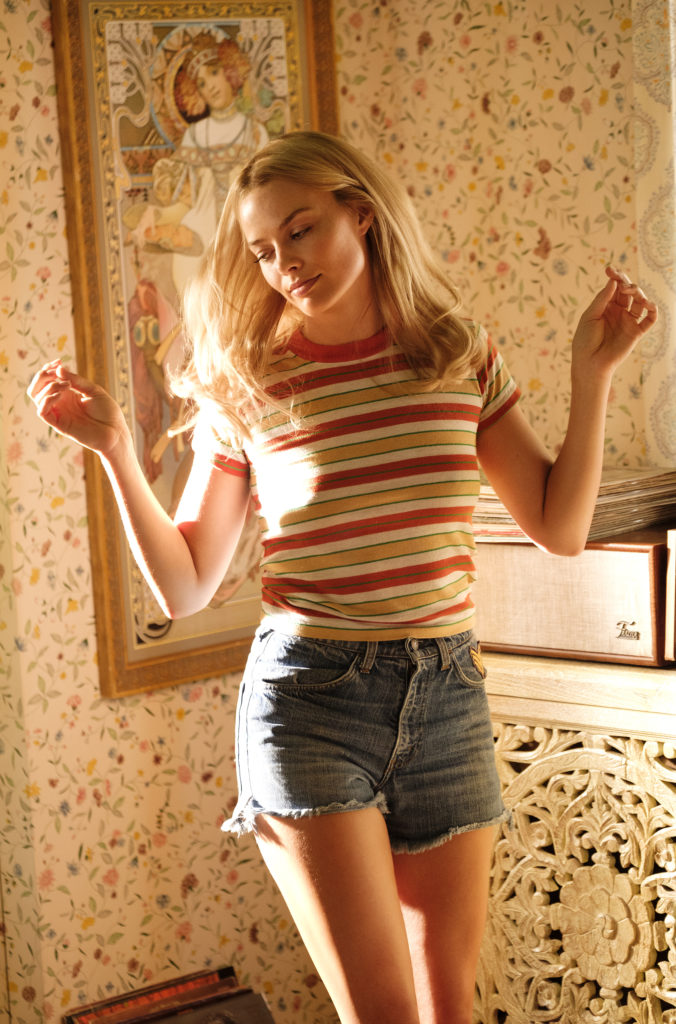 What Tarantino does here is show us Tate’s potential in a day in the life of; she an up-and-coming movie star destined for great things represents what could have been – if history hadn’t gone another way. He is clearly angry at what has been left of her legacy – still associated with her horrific death, he rewrites it – she deserves better. To be celebrated for what she had – and could have achieved – in her own right over an association with a psychopath.

Her story arc is tinged in sweetness and melancholy sadness but indeed, the whole movie is rooted in nostalgia. The glory days in a beautiful, bright LA (meticulously realised in striking production and costumes) captured with a stirring soundtrack rolls along the 2 hours and 40 minutes mark while a quiet menace lingers as we near the final act.

Yes, it’s violent. Much of that violence is geared towards women and it makes for uncomfortable viewing. The fact that this is tied up to figures who were women and who we know committed brutal crimes is an important distinction here, however. It isn’t violence against women for violence sake.

To say much more would only spoil what should be experienced without my giving the game away but you won’t expect it.

The whole film is, in fact, unexpected. It is Tarantino but a mature Tarantino, much of his frantic edits and quippy dialogue left aside for his characters to fill the gaps. It is at times both hilarious and inconceivable and yet, he is at his best here.

Yes, it’s very much a male movie but Tate redeems this to a degree – he doesn’t omit her in a sexist decision over the guys’ screen time, either. She does what she must do, in her own bubble.

You will reach the end waiting for it – only to realise the enjoyment was all in the buildup.

It’s his love letter to film offset with sadness and sentimentality – and a confetti cannon of every cultural reference from his mind –  and by the time the credits roll, it’s not inconceivable to ponder Tarantino’s final outing after number 10 – he’s given his soul to the medium for so many decades, and he understands that time is changing – and perhaps too fast for him to want to match any longer.

Once Upon A Time… In Hollywood is in cinemas nationwide now