NEW YORK, NY - NOVEMBER 09: Actress Reese Witherspoon poses for a photo at the backstage inspiration wall at the 2015 Glamour Women of the Year Awards at Carnegie Hall on November 9, 2015 in New York City. (Photo by Nicholas Hunt/Getty Images for Glamour)

More and more talented and powerful women in Hollywood are making their voices heard in 2015. They are starting a proper conversation about the unfairness of the gender-pay gap in the industry. They want to see prime, in-depth roles for women in film and put an end to sexism in the entertainment business. One of these women – she stands alongside Jennifer Lawrence, Sandra Bullock?and?Emma Watson, to name a few – is actress and entrepreneur Reese Witherspoon.

ICYMI: Are Gender Neutral Roles The Way Forward In Hollywood?

The Wild star was honoured at Glamour’s recent Woman of the Year awards for her work in helping create strong roles for women in film. She started down this avenue in 2006; she took matters into her own hands after noticing the distinct lack of prime roles for women. She became a producer, bought book rights she knew she could star in as well as turn into films of incredible substance, and started a production company. It is for all this that she was (rightly) rewarded for her efforts, and her acceptance speech is empowering and motivational.

“Because I believe, ambition is not a dirty word. It’s just believing in yourself and your abilities. Imagine this: What would happen if we were all brave enough to be a little bit more ambitious? I think the world would change.”

Women are underrepresented on screen, and Witherspoon said she couldn’t sit back and allow this to continue. She graced the stage to accept her award and use the time to make known her hopes and thoughts for the future of women in the industry and here are some highlights:

She is heartsick of the word ?ambition? being considered a ‘dirty word? when used to describe women. ?I want everybody to close their eyes and think of a really dirty word. Now open your eyes. Was any of your words ambition? I didn’t think so. Why do people have prejudiced opinions about women who accomplish things? Why is that perceived as a negative? In a study by Georgetown University in 2005, a group of professors asked candidates to evaluate male efficient versus female efficient in politicians. Respondents were less likely to vote for power-seeking women than power-seeking men. They even reported ambitious women as provoking feelings of disgust,? she said.

She also said that women are underrepresented in every culture. “I think we are in a culture crisis in every field. In every industry, women are underrepresented and underpaid in leadership positions,” Witherspoon said. “Under 5% of CEOs of Fortune 500 companies are women.. No wonder we don’t have the health care we deserve or paid family leave or public access to early childhood education. That really worries me.”

She is tired of sexist stereotyping and rightly points out, that it is a completely unrealistic interpretation of women in general. ?I dread reading scripts that have no women involved in their creation because, inevitably, I get to that part where the girl turns to the guy, and she says, “What do we do now?!” Do you know any woman in any crisis who has absolutely no idea what to do? I mean, don’t they tell people in crisis, even children, “If you’re in trouble, talk to a woman.” It’s ridiculous that a woman wouldn’t know what to do.? 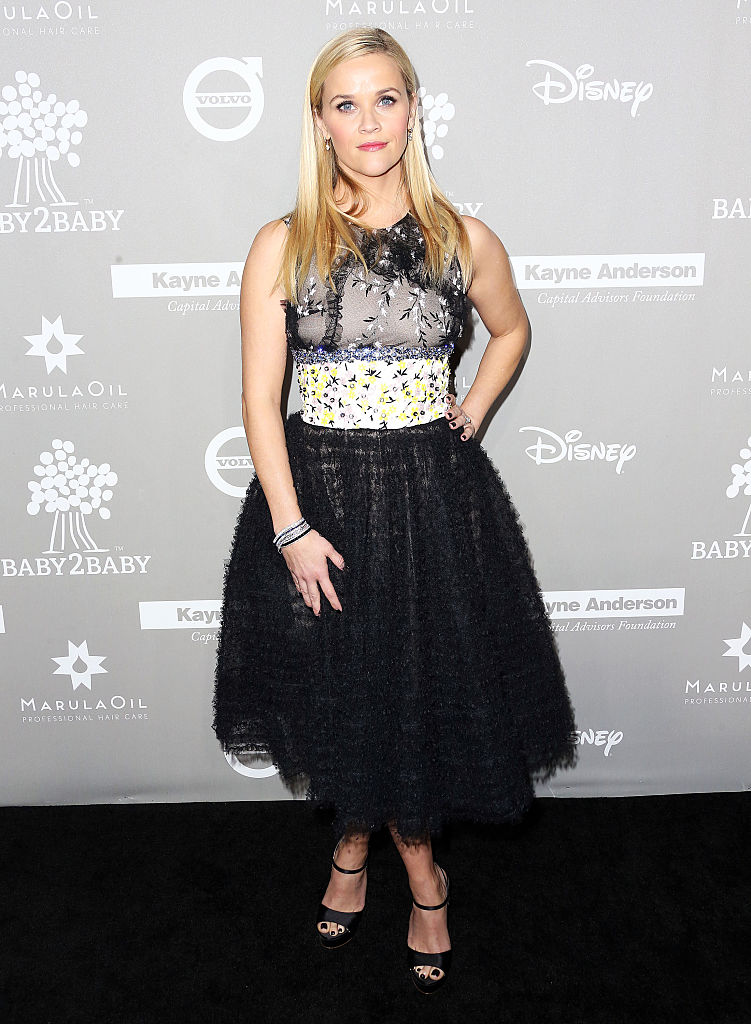 Her impassioned speech comes at a time when women are seeking change (now more than ever before) in an industry that typically mentions male before female. We can only hope that these women keep continuing to make their voices heard, and as Witherspoon so aptly put it, keep striving towards greater ambitions.

You can read the full speech here.