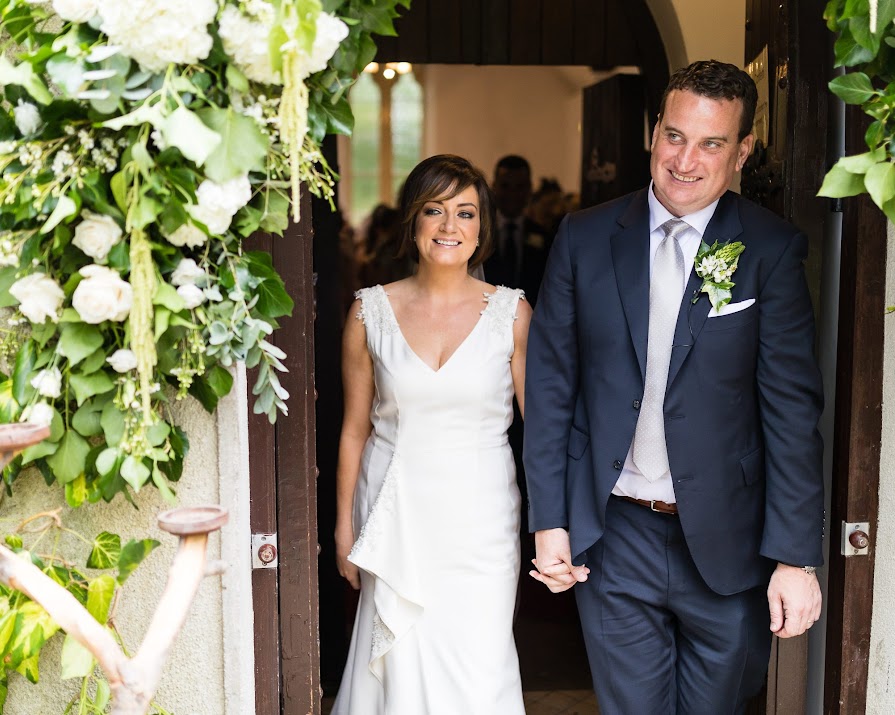 Tracey and Ruairí first met while on a night out in Dublin’s 37 on Dawson Street.

Two-and-a-half years later, it was time to seal the deal.

For their big day, the couple wanted a venue that was beautiful on its own, but that would also allow them to add their own personal touches. They both knew BrookLodge in Macreddin Village in Co Wicklow would make the perfect setting.

Their dream day was filled with romance and fun with oodles of greenery complemented by accents of white florals, and was a joint effort from family and friends. Tracey’s best friend, Dawn Fitzgerald, designed and made the bride’s and bridesmaids’ dresses. Her sister, Hannah Kennedy, created the stunning wedding cake, her father made the signs dotted around the grounds, and her mother designed the wedding invitations with her.

With stunning hair courtesy of Lindsey Duffy and make-up by Kirstie and Nicola at Charlotte Tilbury, Tracey completed her look with Jimmy Choo shoes, earrings from Jenny Vander, and a Tiffany & Co bracelet, while Ruairí wore a Canali suit and his groomsmen donned suits from Baumler, and their wedding rings were found in Rocks Jewellers. Ciarán & Leanne of Sacred Sounds set the tone for the ceremony, after which wedding band Poplife (via 7 entertainment) had everyone in a celebratory mood. And while Katie Kav captured everything via her camera lens, Irish Eyes Videos caught the live action on video. Everyone agreed it was a day they’ll all remember always.

For more wedding inspiration, look out for the January/February issue of IMAGE Magazine, out December 29.