Toxic friends no longer have to spell the end of your general day-today happiness, according to science…

Most of us have had the unfortunate experience of having to deal with a toxic friend at some point. This person arrives in your life under the guise of being a normal, nice, good person who you like and later trust. They might even initially possess good mate qualities like having your back/best interests at heart and are generally not a shitty person to be around. Enough people are shitty to be around, so friends shouldn’t be one of them…that’s kind of the whole point of them.

However, these people are what are known as the blend of pal and secret enemy, or “frenemy.” The ones who can give what sounds like a compliment but one that simultaneously’stings with bitchiness. The ones who make everything – from career milestones to your relationship status – feel like a never-ending competition that you’re never going to win. The ones who you’re always there for but in your hour of need, they are mysteriously otherwise engaged.

But wait! Before deciding to dramatically cut them out of your life forever, our old pal science has something to say about it all. 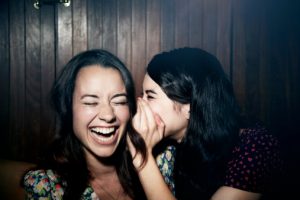 Researchers at the University of North Carolina have discovered that keeping our frenemies in?our lives is actually a much better idea. According to stylist.co.uk, through an experiment involving undergraduates instant messaging each other (half written with the goal of encouraging, half with undermining) they found out that the “frenemies” actually felt more empathy for their partners than people who were just friendly towards each other.

So what could this all mean?

Basically, the researchers made the point that while frenemies may drive us mad, we are always striving to be best version of ourselves in front of them, plus the fact that they get under our skin like no one else does. And who doesn’t need a push every now and then to reevaluate our lives?

So the next time find yourself having a moan about a mate-that-isn’t-really-a-mate, just think: is it better to have someone in your life who doesn’t tell you exactly what you want to hear 24/7? Sure, it’s not what springs to mind when you think of the word “friend” but it can be used to your advantage if you take whatever criticism they throw at you and spin it into something that’s positive for you.?

After all you’re the one in control of your happiness, not anyone that you would call a frenemy, right?