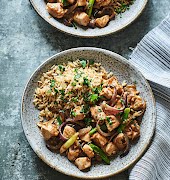 “I want to be a parent who allows my child to show themself to me,” wrote Emily Ratajkowski as she announced her pregnancy. “And yet I realize that while I may hope my child can determine their own place in the world, they will, no matter what, be faced with the undeniable constraints and constructions of gender before they can speak or, hell, even be born.”

Ratajkowski isn’t shy when it comes to speaking out for women’s health and sexual empowerment. Critics have pointed out at 18 may be a little late when it comes to understanding one’s own gender and have also noted that Ratajkowski already seems to have the same expectations about gender that she is trying to resist.

However, the pausing on behalf of her child and what they might decide to be might not be as misguided as some think.

Anoush is a one-year-old baby whose parents have decided not to reveal their child’s gender. They refer to their little toddler as ‘they’ and want to leave it up to their child to decide when they are older which gender, if any, to identify with.

“It’s about opportunities, and by pigeon-holing children into ‘boy’ and ‘girl’, we exclude possibilities.” That’s the opinion of Anoush’s grandmother, who was interviewed recently about the fact that her grandchild is being raised gender-neutral. She told the James O’Brien show that she did think it was out of the ordinary but respected her daughter’s decision..

“Absolutely, I know exactly where I was and how I felt when I was first told, and I rather thought it would die a death once they’d had the baby. I kept a journal when my girls were little and I wrote in it when Hobbit [her daughter] was very young that I would respect however she raised her children. So I got on board and I totally respected what they were doing”.

In fact, Camille from Bristol, didn’t find out the child’s biological gender until just three months ago. Hobbit Humphrey, 38, and Jake England-Johns, 35, celebrated the birth of their baby over a year ago. Humphrey explained to the BBC that she wanted to protect her child from unconscious gender bias.

“When I got pregnant, we then were having a discussion about how we were going to mitigate the unconscious bias. And we figured that the only way we could do that was just not to tell people.”

But is it fair to raise a child without recognising their gender? It is true that we live in a world where such bias exists but this choice has now been taken out of the hands of the child. Surely, despite the bias (and with respect for those who choose to be gender fluid or neutral) being deemed male or female isn’t such a terrible thing?

“Could this type of social manipulation have longer term implications”

What happens when a child begins their life without revealing their gender? Will they feel isolated because that choice was made for them rather than by them at such a young age?

Some critics believe that the risk is that the parents might be successful in removing the gender bias, but that’s not to say other problems could present themselves.

Could this have longer-term implications on a baby who may have wished to be recognised as the person they were biologically born as from the get-go? Or is gender another form of privacy that we can pick and choose to reveal or not.

Last year, in an emotional post, singer Sam Smith revealed he now prefers not to use gender pronouns associated as male or female, instead he wishes to use “they”. It was a brave and obviously well-considered move by a grown adult who has chosen to live their life as such.

Has that choice been taken away from babies like Anoush?

Actress Kate Hudson also made headlines when she said in an interview that she wanted to raise her daughter “individually regardless – like a genderless approach. She later had to clarify by saying “This whole clickbait tactic of saying I’m raising my daughter to be ‘genderless’ is silly and frankly doesn’t even make sense. I just try to raise my kids to be good people with the best tools to face this big crazy world.”

Ashley Wells, a Chicago photographer has been raising her child, Nova as gender neutral. She describes a ‘light bulb moment when they were in the playground and other children would ask if she was a boy or a girl.

“Nova was always put off by that question and would say. “I’m a human’ or ‘I’m Nova,’ or ‘Why do you have to know that?” They now refer to Nova with the pronoun “they.”

There are many individual reasons why parents may want to raise gender-neutral children. The most popular seems to be that by defying gender stereotypes, they can avoid the negative effects of sexism.

It is widely felt that boys who are not shackled by masculine ideals might be more comfortable expressing their feelings. While girls will be less likely to absorb sexist messages that teach them to be passive or delicate. Or is that, in itself, a gendered idea?

Ultimately, there are grey areas in the vast ocean of our lives. Parents are motivated to raise their children the best way they see at the time. This brave new age of raising ‘theybies” exists with the hope that children of all genders will grow up to create a more equal world, one in which gender itself becomes much less important.

Read more: The model who claimed to be transgender and then lied about it