Thinking of going shopping in Dublin city this weekend? This is what you can expect.

As Phase 2 Plus rolls out and restrictions ease, retail shops across Ireland are beginning to pull up their shutters after almost three months of being closed.

Like everyone else, I was curious to see what the new shopping experience entails so I took a stroll down Grafton Street yesterday to get a sense of what’s in store.

Brown Thomas and Arnotts reopened to much fanfare yesterday and there were queues outside both stores in the first part of the day. 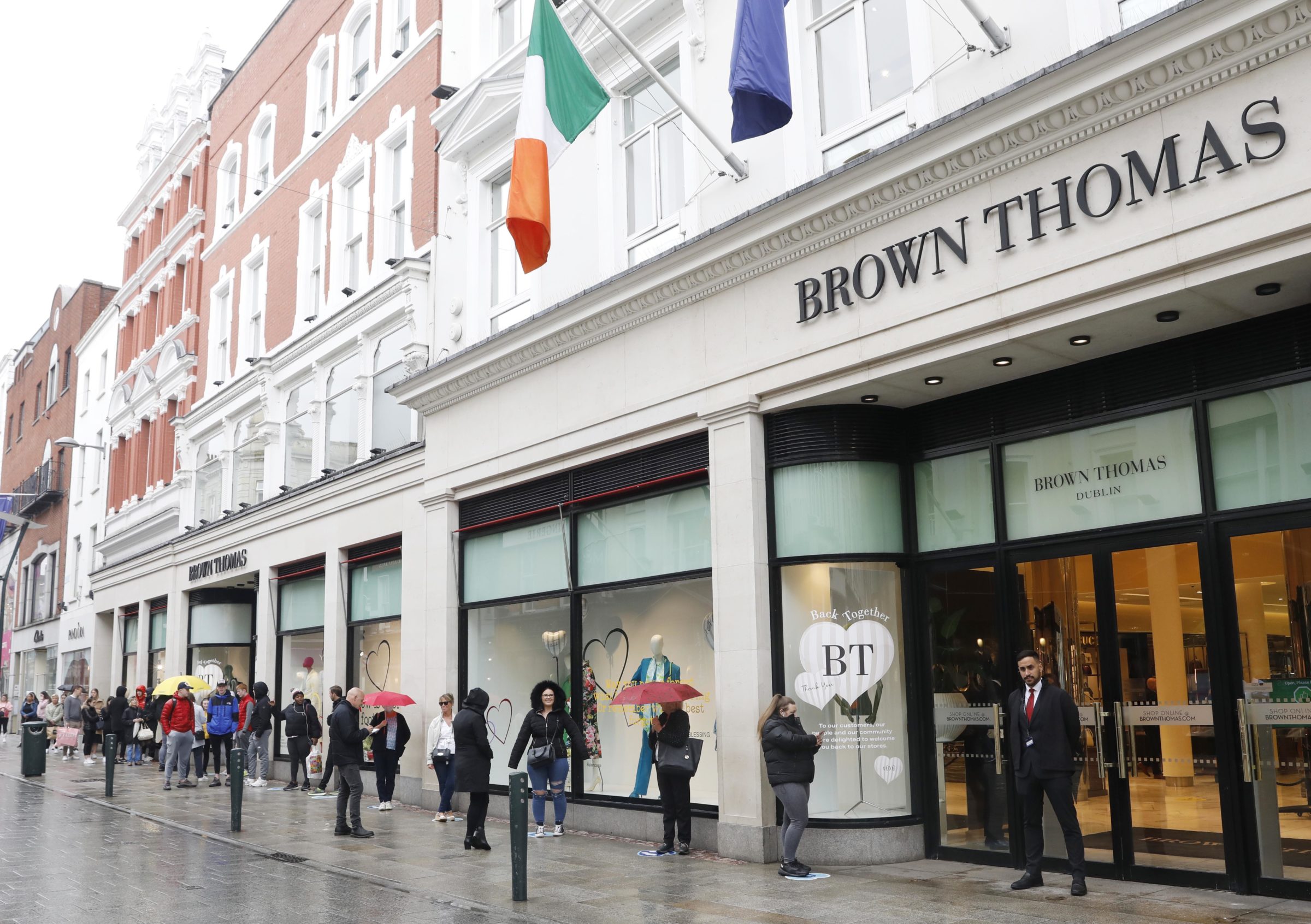 The queue had eased when I arrived at Brown Thomas in the early afternoon. The first sign that this was an entirely new shopping experience was the hi-tech automated entrance system at the door.

The number ‘165/405’ flashed up on a screen (presumably the number of customers in the store compared to how many customers are allowed in the store at one time) and a member of staff guided me towards the hand sanitiser area.

Most of the staff were wearing masks and while it looked a little dystopian, there was a definite buzz in the air. Staff were smiling (or at least I think they were smiling under their masks) and shoppers seemed happy to be getting back to (new) normal.

The Shoe Rooms were particularly busy. A group of women in their early twenties were debating whether one of them should buy a pair of Balenciaga trainers — no recession there. Another woman was trying on shoes with a pair of plastic gloves.

Things were a little more transactional in the Beauty Hall, where signs remind customers to “think before you touch”.

Shoppers weren’t lingering around the beauty counters to spray perfumes or sample eye shadows. They knew the exact products they were there to buy and they weren’t wasting any time finding them.

I wasn’t that surprised by the new luxury shopping experience — we were well prepared for it — but I was very surprised by the level of spending that I witnessed. There was a queue outside the Chanel concession in the Accessories Hall, suggesting that post-Covid conspicuous consumption is alive and well.

Marks & Spencer has also reopened. Their food hall stayed open throughout lockdown — and was something of a best-kept secret in the earliest days of the pandemic. Their next-door neighbour Tommy Hilfiger is open too, as are Pandora, Clarks and Claire’s Accessories (the latter can only welcome six customers at a time).

Penneys stores with street access open on Friday while outlets in shopping centres will open on June 15th. & Other Stories on Grafton Street opens on June 15th at 10.30am. 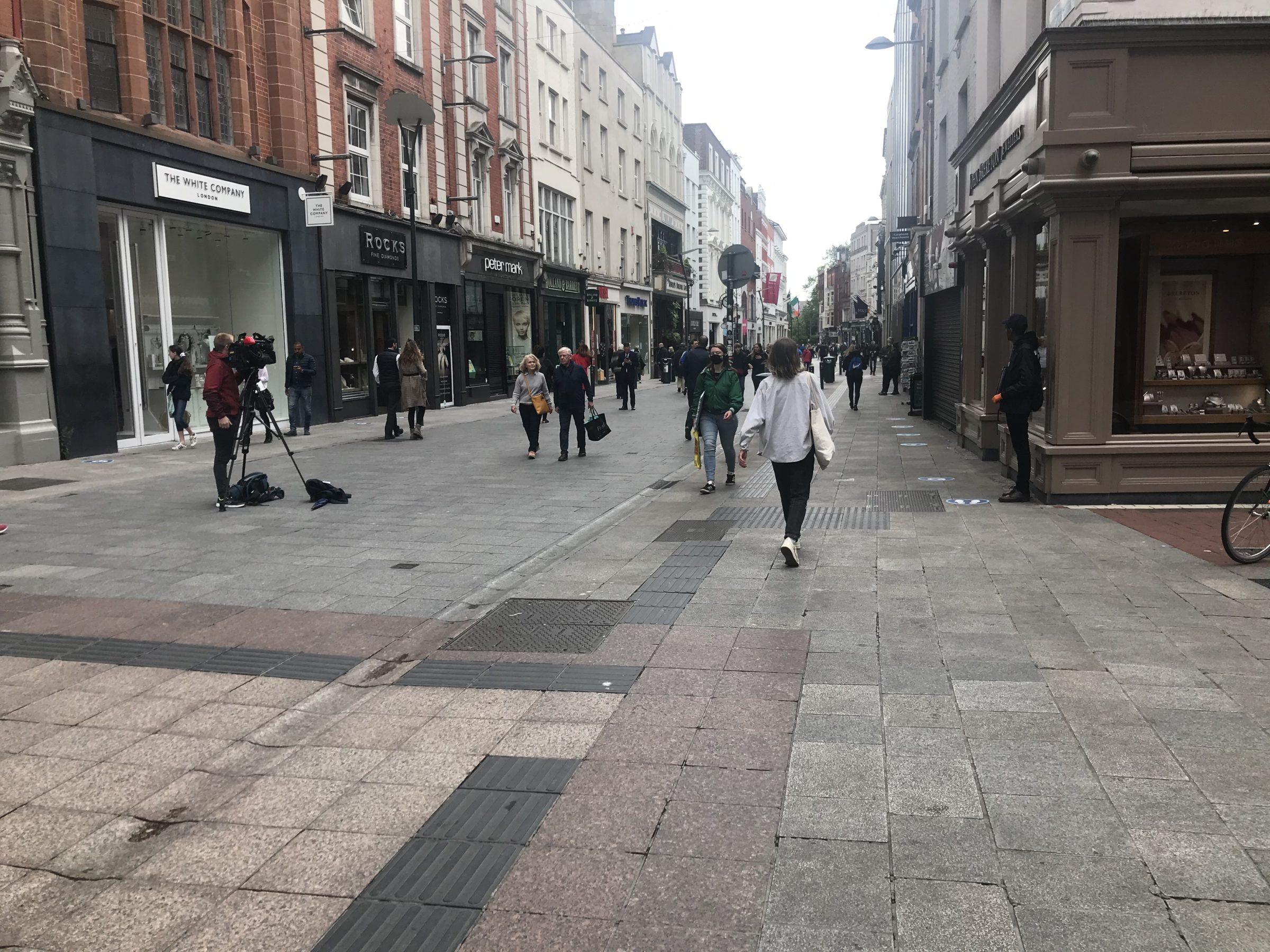 Around 40 per cent of the shops on Grafton Street were open yesterday afternoon and while some were eerily quiet, others had queues outside their doors.

My next stop was Massimo Dutti, where there was a midi skirt I wanted to try on. The fitting room was disinfected before I went in and the skirt was carefully wrapped in plastic and sent for cleaning when I came back out.

It seemed like a painstaking process for the fitting room attendants and I made a mental note to only try on clothes that I really love the next time I go shopping.

Around the corner on South King Street, there was a queue of about 15 people outside Zara. I decided to give it some time to ease but it was even longer when I came back half an hour later.

Next door to Zara, Warehouse was having a closing down sale with 50pc off all stock (stock is sold “as is” with no refunds). Oasis and Warehouse are closing permanently after administrators said they were unable to find a buyer for the business.

The Oasis and Warehouse group isn’t the only retail casualty of Covid-19. It was announced yesterday that four Irish Monsoon and Accessorize stores are to close permanently. This includes the Monsoon store on Grafton Street, which has been boarded up with sheets of plywood. 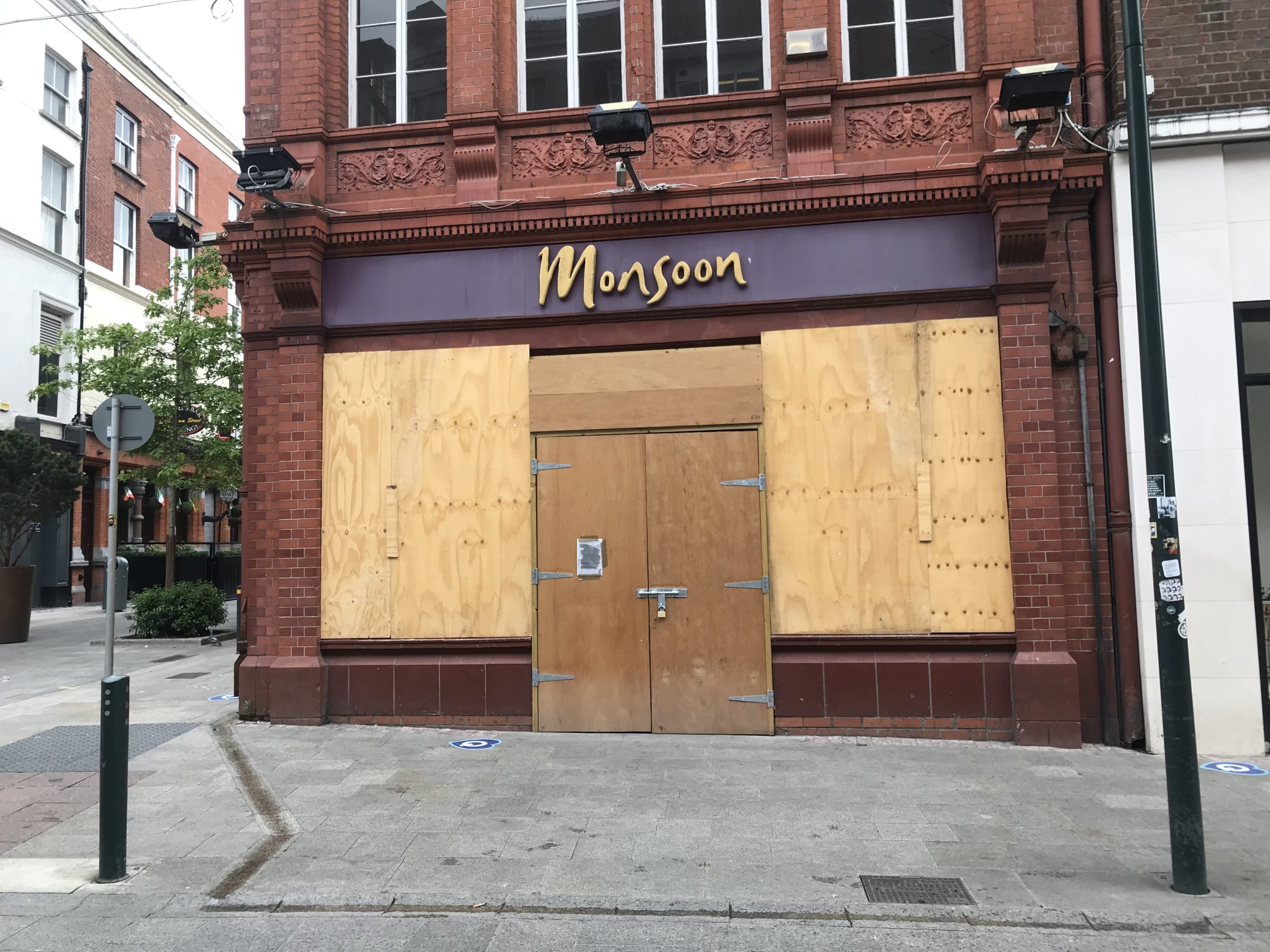 Smaller boutiques like Costume on Castle Market and Monaghans on South Anne Street have also reopened.

Ireland’s oldest retailer Tom Monaghan (94) was all over the papers this week as he celebrated the reopening of the shop that he runs with his daughter Suzanne. Tom has survived three recessions so this latest crisis doesn’t faze him one bit.

According to figures from Dublin Town, footfall in Dublin city centre rose to 160,000 people yesterday (up from 100,000 on Monday).

The public toilet problem has been solved by Dublin City Council who have installed toilets at the top of Grafton Street by St Stephen’s Green. Members of the Volunteer Corps were positioned along Grafton Street with signs reading ‘Looking for a toilet? Ask me for help’.

It was strange being able to traipse in and out of shops yesterday. I live in the city centre and I walk up and down Grafton Street almost every day, but this was the first time in months that I’ve left the house without a preordained route in mind. I had forgotten the freedom of spontaneity.

The lack of tactile interactions was strange too. I’m used to stroking fabrics and smelling perfumed products and while that’s not strictly forbidden, I was definitely more hands-off in my approach. I was also more conscious of my mindless browsing habit, particularly in shops that only allow 4-6 customers at a time.

There was a feeling of optimism in the city centre yesterday. Windows were being dressed and shopfronts were getting a fresh lick of paint. But it was tinged with a sense of uncertainty that was hard to ignore.

It’s a long way back for a lot of these retailers and I’m sure some of the smaller ones felt like they were opening their doors for the very first time.

The next few weeks are going to be challenging for them — and they are going to need all the support they can get.

Read more: Hairdressers will open on June 29 – here’s what we know so far

Read more: Our pick of Irish-designed Father’s Day gifts for the best dad

Read more: Ireland is reopening but where are people supposed to use the toilet?

The IMAGE Shopping Basket: 40 new items we have our eye on this week