This Proud Dad Has Just Made Our Winter Olympics

Californian Chloe Kim made history yesterday as the youngest female snowboarder to win a gold medal at the Winter Olympics, scoring a gold at the PyeongChang snowboard halfpipe final.

With such a massive achievement, she gathered thousands of supporters on social media. None as special, however, as her doting dad, Jong Jin. 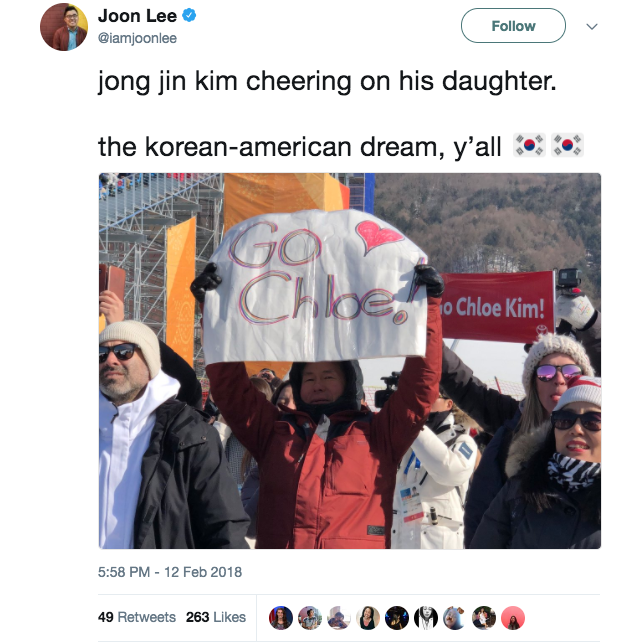 Jong Jin Kim immigrated to the U.S  from South Korea in 1982 and has always been a huge supporter of his daughter’s sporting career, even giving up his own job as an engineer to support her training. It was clear on Monday that his efforts had paid off, and he was clearly immensely proud of Chloe, donning a homemade sign of support in the crowd that was even laminated to protect it against the weather. If that’s not the sweetest thing you’ve heard all day, I don’t know what is.

What’s even sweeter than that lovely sign is the kind words Jong Jin used after the event. As Chloe was crowned the winner, he could be heard to be shouting ‘American Dream!’ and later said in an interview “when I came to the United States, this was my American hope. Now, this is my American dream.” With so much turmoil about immigration currently going on in the U.S, it was heartwarming to hear such a wonderful immigration success story from a proud parent.

However, in true dad fashion, Jong Jin made it clear that education was still majorly important for Chloe. Speaking in Korean, he said: “We worked so hard. Now she’s going to go to college. She’s a student, and she’s got to go study hard.”

Seems like fathers give the same lectures even if you’re an Olympic gold medalist! Now excuse me while I go call my dad.