Plus-size model and body positivity activist Tess Holliday has been revealed as Cosmopolitan UK’s cover star for their October issue.

Holliday is shown in a full-length pose in a green vintage-style swimsuit. The shot is not cropped at her face, nor is she covered by layers of clothing, as many publications featuring plus-size models have been criticised for in the past. 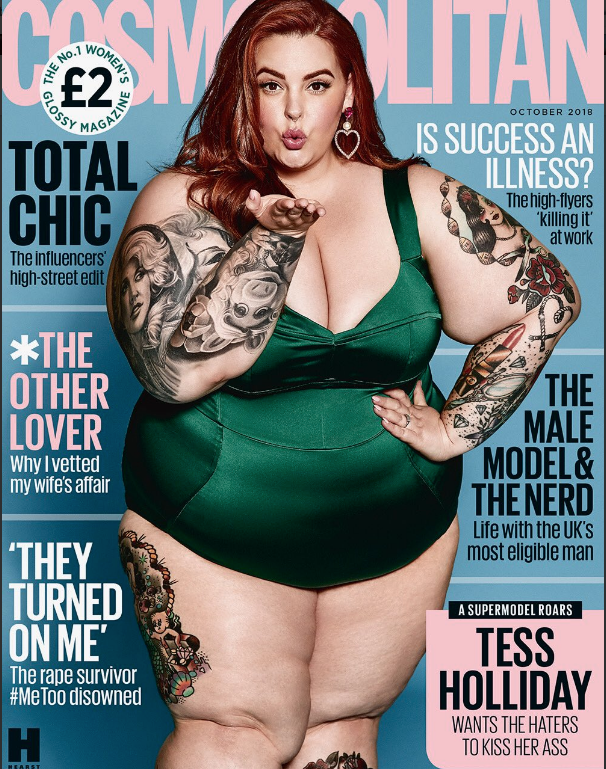 In a tweet announcing the cover, Holliday talked about the lack of plus-sized models visible in the public eye when she was growing up. She said: “Thank you @CosmopolitanUK for this incredible opportunity. If I saw a body like mine on this magazine when I was a young girl, it would have changed my life”

While the cover shot is lighthearted and bright, Holliday’s accompanying interview discusses harder topics, such as the #MeToo movement, diversity in the modelling industry and Holliday’s own struggles with mental health. She revealed that her mental state in the past year and a half had been “the worst of [her] life”, and said: “It felt like a never-ending black hole. I was so tired of hurting… I just didn’t want to be here any more.”

While Holliday’s mental health was struggling, her public image as an advocate for body positivity was soaring. She began the Instagram-based movement of #effyourbodystandards to encourage women of all shapes and sizes to embrace their bodies. The hashtag has been used over 3.2 million times, and Holliday’s success as a commercial model has exploded.

Many social media users have shown support for the new cover, with Holliday’s own fans sharing stories of how the model has inspired them to love their bodies. One comment read: “In all of my 32 yrs of living I’ve NEVER seen a cover soo beautiful and showing a curvy, plus size beauty acknowledged as she is in her TRUE SELF. Inspiration at it’s best…. I’m gonna blow this up and place it on my walll… Thank you for being my Idol.”

Cosmopolitan UK’s October issue will be available on shelves from tomorrow.