‘Anything’s possible. It’s just a case of going for it’ – Rachel Nolan

What does “Do What You Can’t” mean to YOU? For the co-founder of Nobó, a dairy-free ice cream and chocolate company, Rachel Nolan it’s much more than a snappy slogan, it’s a way of life. Despite a high powered “dream job” in Condé Nast’s advertising department in New York, Rachel felt unfulfilled. Herself and her then boyfriend, now husband, Brian packed in their lucrative nine-to-fives and swapped New York for Tuscany and 14-hour days in a restaurant but couldn’t have been happier. Six months later they returned home to Ireland to set up Nobó, a dairy free ice cream and chocolate company.

How long has Nobó been running?
“Six years now. Brian was in finance and I was in advertising. I was working with Condé Nast in their digital department so did the whole relaunch of Vogue.com. It was a good job in New York, but ultimately I felt it wasn’t right for me.”

It’s unusual you were both so in synch and open to such a huge change.
“Yes, it was all timing. We moved to New York together. Brian had gotten a job with a startup, but his visa ran out and he came back to Dublin, so I was living there on my own, working for Condé Nast. And he tried for a year to get a visa over there. He did 10 interviews for a company flying back and forth. At the end of it, we felt it was ridiculous and questioned what we were doing, on the other side I felt really unfulfilled and that I didn’t quite fit in where I was and thought that was where I wanted to get to. We didn’t have children at that point, it was a lot easier to make a decision like that.”

Did people question your move?
“Yes. Everyone was wondering what we were doing, particularly because I left my job saying I was going to Italy to work in a restaurant for six months. There was no plan beyond that. We were just taking a step toward a different path, but there was no plan or business idea at that stage. We just both knew we wanted to work for ourselves and in the food industry. That was the scariest thing because it was so unknown – going from an office to picking vegetables within the space of two weeks. I remember calling people and telling them I was sick with anxiety. You have your own internal world and passions, but I had never vocalised any of that, so to anyone on the outside it just sounded totally bizarre, but for us it made sense.”

Were your parents supportive?
“My dad was entrepreneurial and was never in a nine-to-five job, so I suspect that’s why I found it so difficult to be in that structure myself. He had passed away a year before we moved to New York and that was a massive milestone for me because I realised how short life was and what’s the point in having regrets. It’s all so fleeting. It made me question what I was doing and what I was spending my time on. For Brian, who didn’t come from that background, it was more worrying. His dad is an accountant and Brian was in finance, but I think we helped each other through.”

What an amazing legacy your dad has left you – that entrepreneurial spirit.
“I know. He would have loved it. He also loved chocolate! You carry your parent’s lessons with you. In a way, I was lucky that I was at a stage when he died where I could use that and could change the course of things in a positive way.”

Picking vegetables in Italy must have been idyllic after the stress of New York?
“It was magical. It was like a movie. We just got so lucky in the place that we landed. We were working in exchange for room and board so we were working 14-hour days, but by the end of the day, you’re exhausted, but physically tired rather than just mentally. Being able to use your hands through cooking was just such a great feeling. We knew then we could never go back to our old lives. It was a massive thing, but it’s funny the things you nearly don’t do. I don’t think I could ever have stayed doing what I was doing, but it was fortunate that we had each other as I don’t know if I could have made the leap on my own. When you have someone who sees it the same way you do and you back each other it gives you so much more confidence.”

What happened when you returned to Ireland?
“We were a little bit lost. We were stuck between two worlds. We had to work so Brian went back to the company he had left four years before in finance and I started interviewing in agencies and got called back for a second interview and I just didn’t go. I just knew I couldn’t do it, otherwise what was it all for? In NYC we were exposed to so many innovative foods. I had changed my diet and was eating less dairy and I was interested in nutrition so when I came back to Dublin I realised there very few options. Seven years ago, getting dairy-free milk was really difficult. Now, every Spar around the country has almond milk or soya milk. So we started exploring creating something that was a treat, but without dairy and using the best possible ingredients. We got on the Food Works programme, where you submit an idea that’s suitable for export and they bring you through a mentoring programme. It’s like an MBA. Brian was working, but I got subsidised to do that and it was great because it gave us a focus and it allowed us to bring our idea to export.”

Nobó has gone global! Where are you exporting to?
“Canada is going really well for us. It’s a new market, we just launched our chocolate there last year and it seems a really good fit. We’re in about 60 stores now, with more coming on board so by the end of the year we should be in a good position. We’re also in Singapore, Dubai, Canada, US, Spain and Portugal.”

Doing what you can’t is often seen as a big goal, but breaking into the food industry sees you achieving small goals all the time, would you agree?
“Yes, that’s true. Scaling up was one of the biggest challenges. We always wanted to make something that didn’t exist before, so with the ice cream we wanted to make it with as few ingredients as possible. And everything was something that if you looked at it you would know what it was. So we chose avocado, we talked to people about the best sweetener and went with honey because it’s been around so long and it’s not a fad. We really didn’t want to include stabilisers or gums and meeting with food scientists they told us we couldn’t make ice cream without those ingredients, and just couldn’t understand that. So we spent a year and a half experimenting with thousands of recipes to get it right. When we did get it right, we’d try it to the manufacturer and it would split or wouldn’t work and that was so frustrating because you’d get it on a smaller scale, but when you wanted to scale up it wouldn’t work. But we persevered and it worked eventually. Trying to make milk chocolate without milk was also a challenge, but we wanted it to be as creamy as possible and it’s a combination of the ingredients and the processing. It’s stone-ground for 24 hours to break down the coconut sugar and the cashew nuts to get it silky smooth. A lot of the vegan products have a dry or gritty texture and it felt like one of the key things with milk chocolate was about the dissolve in your mouth so we spent a long time trying to get that right.” 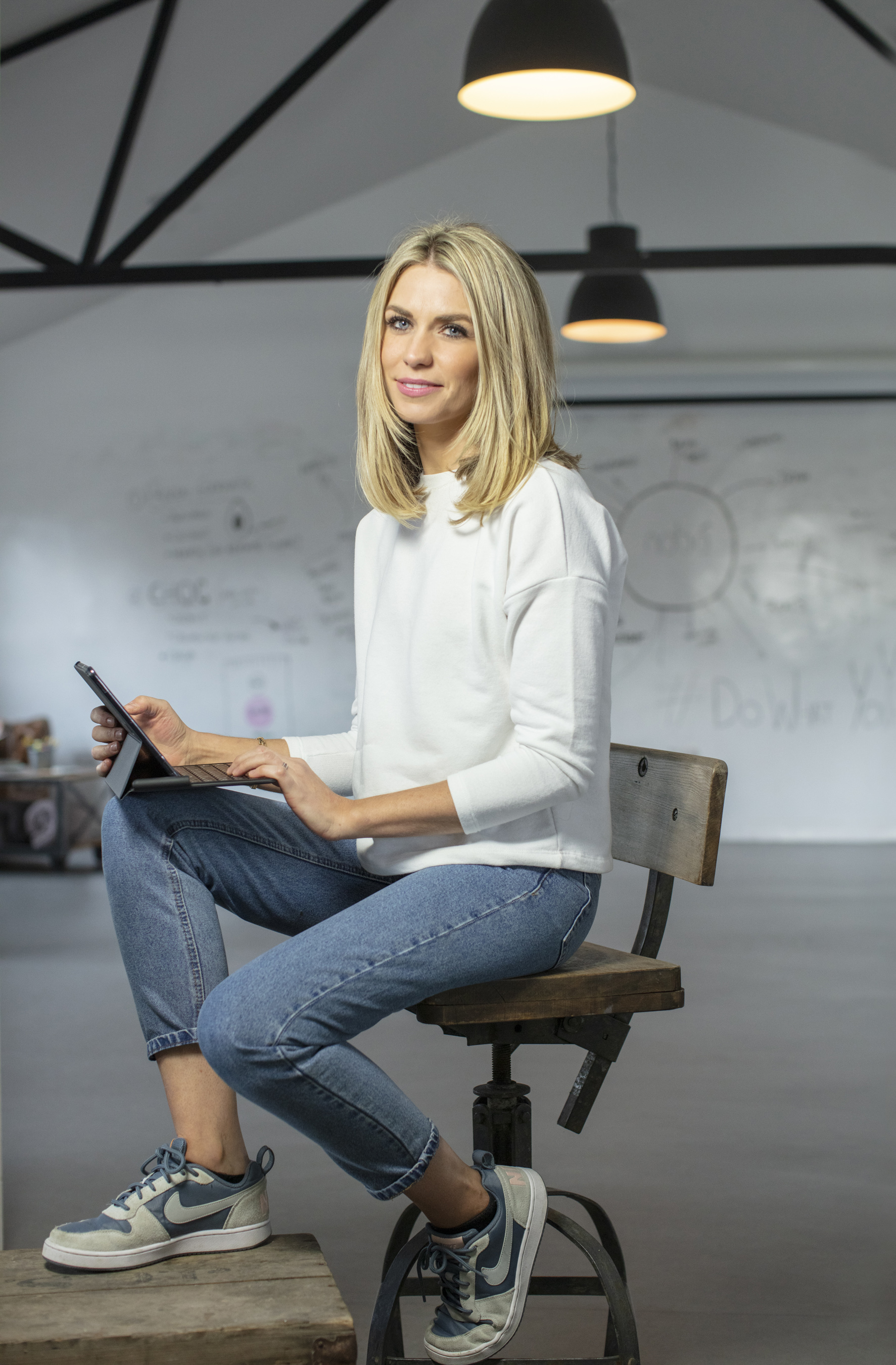 How is working with your husband?
“I have so many friends who cannot understand how we do it, but I don’t think it’s for everyone. We are very lucky we get on and complement each other. Now that we have two boys, it’s great we both have the same goal of minding your kids and the business and you make it work between you. We share the responsibility, but we have flexibility too. We have to make an effort to do separate things as well. We also make an effort not to talk about work at home because it blurs the lines between work and life. I love it, I can’t imagine doing it with anyone else. We have been around so much with our boys and some people wait until they retire to have that. We always say Nobó was our first child, then we had the boys. It was a shared vision, so it’s not like someone came in later and that’s been really important.”

Any advice for anyone being told they can’t make it?
“The first thing is taking some sort of step. You really have to have some form of self-belief. Not intentionally, but people can challenge or judge you. We are so used to conventional ways and it may require you to review how you look at things in order to go there. Initially, I thought “I can’t move to Italy” or “I can’t leave my job” but the ‘can’ts’ were my fears. I had to relook at my life completely. Sometimes it doesn’t have to be a big step, sometimes a small step will give you confidence in where you’re going. People don’t give themselves credit for what they can do. Anything’s possible. It’s just a case of going for it.”

If I knew then what I know now: green entrepreneur Anne-Marie Tomchak on the business advice she does and doesn’t take