Pinterest isn’t just the place to find beautiful photos of homemade crafts or bridal themed pinboards. It turns out that the social media website also has a very active mental illness focused community who are using the outlet as a means of expressing their experiences, according to a new study.

However, the researchers argued that those who use the site for this purpose don’t have enough access to the coping tools they need to use alongside this. About 60% of the pins they found didn’t make a reference to any specific kind of coping. Of those that did mention coping, over half mentioned a dysfunctional coping method, such as pretending everything is okay rather than seeking help.

The research, conducted by the University of Georgia, saw nearly 800 pins analysed on the site relating to depression, surfacing them using search terms like “clinical depression.” They found that depression-themed pins elicited a significant amount of engagement, including repins, likes and comments. Some of the pins were explicit in their references to depression, mentioning suicidal thoughts or portraying an image of self-harm. (In fact, about 10% of these pins referred to thoughts of suicide, which is alarming). Others were more subtle, including things like sad messages or poetry. 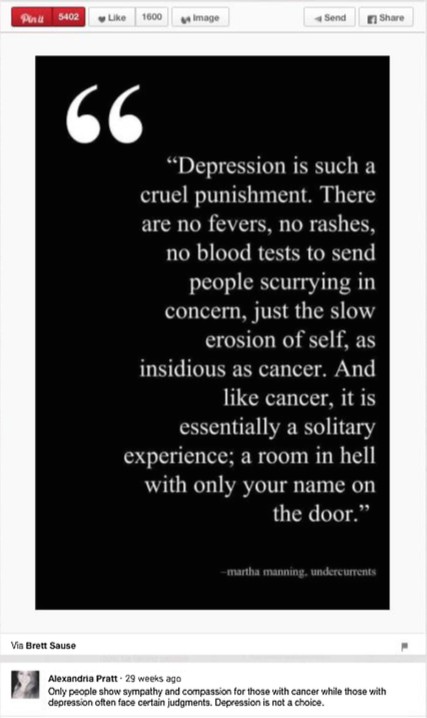 It was these depression-focused pins that elicited high response levels for re-pins, likes, and comments and more than half of the pins expressed perception of depression as a severe disorder.

“We found that when depression is being communicated or portrayed on Pinterest via images or text, there is a lack of more proactive coping approaches also being portrayed on Pinterest,” study co-author Yan Jin, an associate director of UGA’s Center for Health and Risk Communication, said.

“Social media can be helpful for people working to cope with mental illness: Users may sometimes experience feelings of safety and support online when they feel a sense of community and decreased stigma. Pinterest can be an important avenue for expressing themselves and venting, which is a form of coping with stress and depression,” according to the researchers but they emphasised that legitimate mental health organisations should be present on the site to give people dedicated support and help while online.

Given our constantly evolving social media landscape, there is a very real opportunity to make this a reality. Plenty of business and organisations are proactive on Twitter, for example, so why not extend this across a similar platform such as Pinterest?

“This is a great opportunity for health professionals and health public relations professionals to engage in and put in more effective messages out there on this platform, involving such things as health tips on how to deal with depression or providing the right coping mechanism to facilitate more positive discussions in this community,” Jin added.

It will be interesting to see how this evolves. While it’s great to know that anyone?can unite on social media and bond over common issues, it would also be reassuring to know there are the right support networks to help those that need it most.