Actor Patrick Stewart (who we heart) has found himself in the middle of the controversial ?gay cake? debate. Stewart came to the defense of an Irish bakery after they refused to decorate a cake, which said ?Support Gay Marriage? due to their religious beliefs.

The actor called it ?a deliciously difficult subject? because he said he found himself on the side of the bakers. ?I would support their rights to say, ?No, this is personally offensive to my beliefs, I will not do it,? he said. While this has divided some of his fans, you have to hand it to Stewart for honestly giving his feelings on the matter.

Ashers Bakery, based in Northern Ireland, lost a court case last year after refusing to make a cake with the words “Support Gay Marriage” above a picture of Bert and Ernie from Sesame Street.

The McArthur family who own the bakery were found guilty of unlawful discrimination and fined €500. Reports say the bakery plans to appeal the decision.

Knowing his comments would more than likely upset a few; he took to Facebook to explain his thoughts in a post. “In my view, this particular matter was not about discrimination, but rather personal freedoms and what constitutes them, including the freedom to object. Both equality and freedom of speech are fundamental rights? and this case underscores how we need to ensure one isn’t compromised in the pursuit of the other.”

However, he was eager to stress that this did not mean he was “anti-equality or that he shared the beliefs of the bakers.”

“Nothing, absolutely nothing, could be further from the truth,? he continued. ?I have long championed the rights of the LGBT community, because equality should not only be, as the people of Ireland powerfully showed the world, universally embraced, but treasured.? 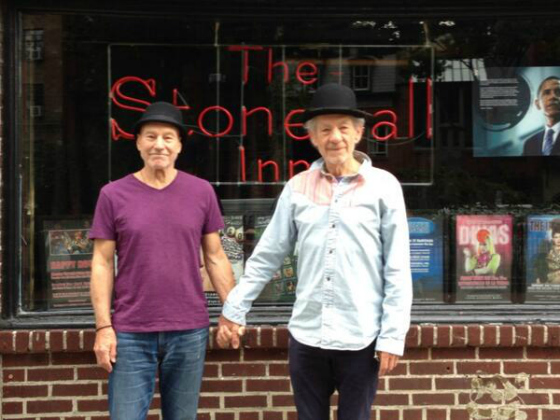 Stewart seems really genuine here, and no one can argue that he hasn’t championed LGBT community rights over the years. We think he should be allowed to express his views. Plus, don’t forget, he is besties with Sir Ian McKellen who is openly gay (they have the best friendship ever), and Stewart even once said he was totally grand when a newspaper mistakenly thought he was gay. He’s a good guy. Also, he frequently posts epic snaps like this on the Internet:

What do you think of Stewart’s comments?