When it comes to suffering from depression and anxiety, it can be all too easy to feel alone; many struggle to deal with it themselves, and trying to explain it to others is a different ball game entirely. Now it seems an increasing number are trying to use social media as a way of uniting those going through such difficulties. First there was Pinterest, and now a new social network is being formed’solely for this?purpose.

This particular’social network is trying to bring sufferers of stress and mental illness together and “crowdsource wellbeing”, allowing those dealing with depression and anxiety to offer each other support and advice.

ICYMI: Watch: People Draw What It Feels Like To Have Anxiety?

Panoply and its sister app Koko were created by an MIT graduate called Robert Morris as part of his dissertation. They’re social networks designed for people with depression and anxiety. As well as attempting to bring people together,?the app takes a specific social media approach to mental health, based on the ideas of Cognitive Behavioural Therapy;?allowing users to post negative or depressed thoughts they’re having and then receive feedback from other users suggesting how those dark thoughts might be reframed in a more positive manner. You can also post your worried thoughts anonymously if you wish. 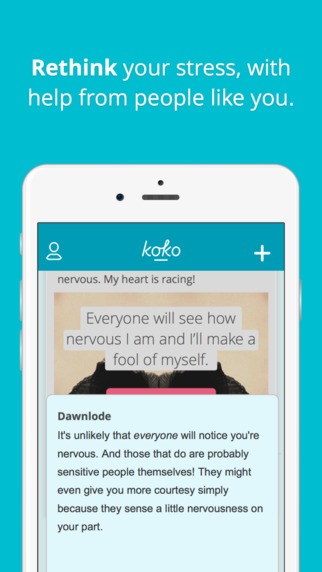 While the app isn’t a substitute for talking to a professional, Morris suggests that it is a free alternative to those who would like to take an initial step in their treatment of depression and anxiety and gets you talking and confronting the issue. He acknowledges that his app isn’t the first to?engage people in self-guided psychotherapy techniques but explains that previous models share a common problem: “Once you release them out into the wild, people just don’t use them.? He added that he and researchers designed Koko to ‘really mimic some of the interaction paradigms that underlie very engaging social programs,? in hopes that involving users in a social network will encourage them to keep using the app, as not only do you post your own thoughts, you can help others rethink theirs. 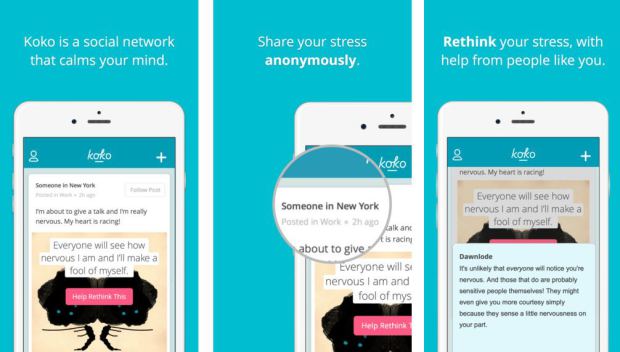 “You really learn these techniques best not by absorbing feedback from the crowd, but by teaching them to other people. Helping someone else reappraise a negative situation is a bite size task that only takes a couple of minutes, but you’re really flexing that cognitive muscle over and over,” Morris explained to Wired.

He added that he sees Koko fitting within the popular trend for healthy lifestyle guides, saying, ?We know so much about how to adjust diet and how we eat, but we don’t have a good framework collectively for our emotional health.?

The app is available as a free iOS download and an Android version is currently in the works.