Miss Piggy Is A True Feminist

Miss Piggy has made history by being the first muppet/puppet to receive an esteemed award for Feminism, and she seems delighted about it. She received the? Sackler Center First Award from the Elizabeth A. Sackler Center for Feminist Art at the Brooklyn Museum just yesterday ?Isn’t it wonderful? Isn’t it about time?? Wise words from the puppet herself.

Speaking about her honorable win in an essay for Time Magazine, Miss Piggy was only too happy to admit that she is indeed a feminist pig. ?The prestigious Sackler Center First Award is presented to women who have broken barriers and charted changes in all disciplines and areas. Past honorees include Associate Supreme Court Justice Sandra Day O’Connor (ret.), Toni Morrison, Jessye Norman, Susan Stroman and Julie Taymor, to name just a few. I am thrilled to be in such esteemed company. And needless to say, they are thrilled to have moi!,? said a delighted Miss Piggy.

The Muppet star was quick to respond to any critics who would dare question that she deserved the award. ?I mean that moi is now and has always been an ardent feminist and champion of women’s rights,? she said.

You well and truly rock Miss Piggy (she’s always been our favourite muppet if we’re honest). 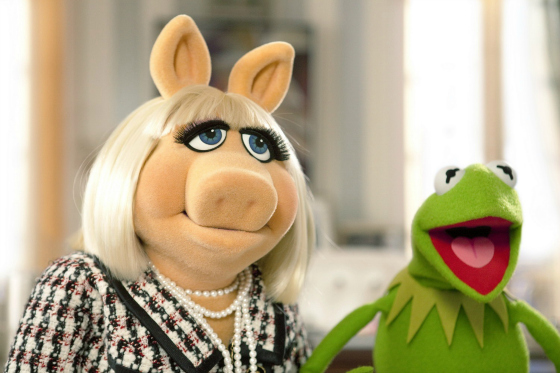 ?I believe any woman who is willing to struggle, strive – and if necessary learn karate – to make their mark in the world is a feminist. And, yes, I believe that any woman, who cares about her appearance, her star billing and most especially her percentage of the gross, is a feminist.

Moi is all of these things.,? she continued.

And finally, asked what she believes is the future of feminism, she responded with this powerful comment. ?The answer is obvious – feminism’s future must be proud, positive, powerful, perseverant, and, wherever possible, alliterative. It must believe in itself, share its triumphs, overcome its setbacks and inspire future generations.?

We love a woman puppet that stands up for what she believes in and say fair play to her for proudly taking a stand for feminism. Miss Piggy’s long-term muppet partner, Kermit the Frog was in the audience as she received her award, but sadly, she didn’t mention who she was wearing. Why didn’t someone ask her?!