Met Éireann has said they are “closely monitoring” the path of category five Hurricane Lorenzo, as remnants of it could potentially hit Ireland later in the week. However, they stress that there is a “lot of uncertainty” for its path for the week ahead.

The forecaster has released an update which said they are tracking a violent category 5 hurricane which could potentially make landfall in Ireland on Thursday.

Hurricane Lorenzo is the most northerly and easterly hurricane that has ever been recorded in the Atlantic. It’s currently equidistant between the Caribbean islands and Africa. It is the strongest storm ever observed so far north and east in the Atlantic, according to the US National Hurricane Centre.

“On the forecast track, Lorenzo is expected to move near or just west of the Azores late Tuesday and Wednesday,” Met Éireann said.

However, they said its exact track and severity, once it comes closer to Ireland, was still uncertain. 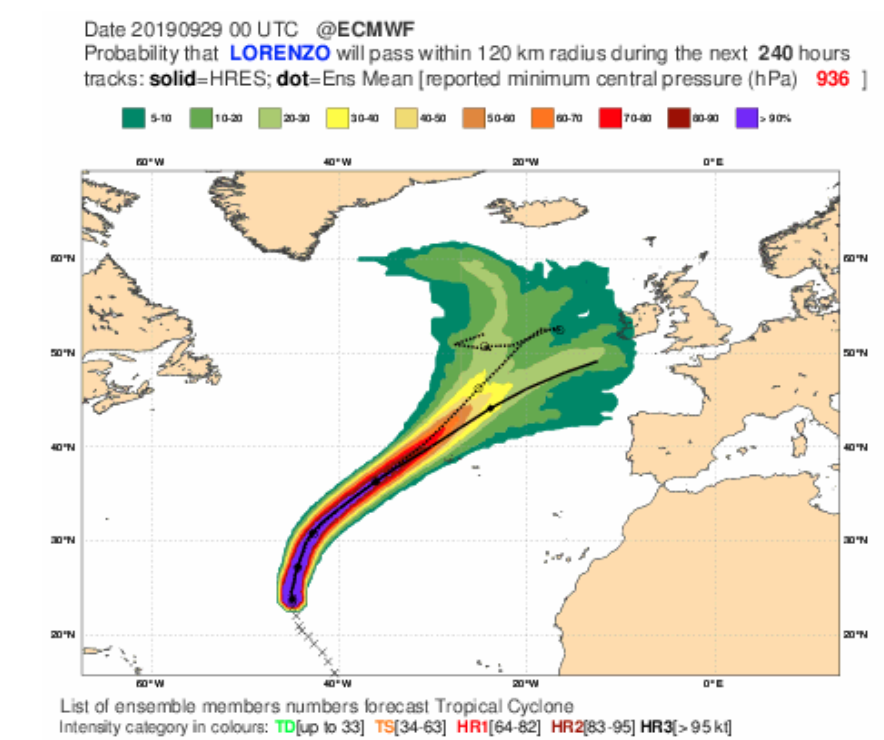 On Sunday, Met Éireann released an image showing the possible paths of the storm based on its weather prediction models

“Thereafter, the exact track and the intensity of Lorenzo as it transitions to an extratropical low is still very uncertain.”

“However, one possibility is that it will track northeastwards towards Europe. Met Éireann, the UK Met Office and the US National Hurricane Centre (NOAA) are holding daily conference discussions,” they continued.

Met Éireann forecaster Jean Byrne told the Irish Times Hurricane Lorenzo could potentially bring gale-force winds to Ireland on Thursday into Thursday night though if this is the case, it will have lost much of its energy by then.

There were, she said, “huge discrepancies” in the computer models tracking the status of the hurricane. Some models showed remnants of the hurricane tracking due north and west of Ireland while others have Ireland and Britain directly in the path of Lorenzo.

“The progress of Lorenzo and any potential impacts for Ireland are being closely monitored.”