For those who love the festival’season, Body&Soul, returning to Ballinlough Estate?this weekend is considered one of the best. The surrounds are almost mystical in appearance, the acts electric; it’s always retained a special quality.?But when it comes to the festival circuit, in particular, there’s still very much a gender gap – female performers are significantly lower in comparison to men. So IMAGE.ie spoke to four exceptionally talented Irish women and artists who will take to the stage: Singer Elaine Mai,?Dublin musician Ailbhe Reddy, pop artist Katie Laffan?and violinist/singer?Joni?about their passion for music, women in the industry in 2017 and why this upcoming Irish gig means so much to them. ??

When did you decide to turn your musical passion into a career??

Elaine: ?It?wasn’t until I was in my mid-twenties that I realised how much of a creative outlet it was for me and how much I loved writing and performing. I knew then that I had to start writing and performing my own music and I’ve been doing that ever since. I’ve always worked full-time while being a musician and this really gives me the freedom to not have to compromise in any way when it comes to my music. I only play, write and perform music that I love and this is really important to me.

Ailbhe: I?guess the romantic answer would be that I had always wanted to be a musician and a few months ago I decided to commit to making it work no matter what. Really I had to wait until I could afford to focus purely on music!?It’s what I’ve always wanted so just to be committed full-time is fulfilling!

Katie: ?I get a lot of messages from all over the world encouraging me to do it. Just the feeling of that alone. I can be as artsy as I want here but the big turning point was when I start making the same money as my mates in normal jobs (Not all of them mind you) and it’s less consistent but I float by. Although it’s not about money for sure it defo helps me to eat and not be a commodity and keep writing songs.

Joni:?I still work as a special needs assistant but I am on maternity leave at the moment so sometimes finding time to juggle everything can be hard. But when something is your passion you always find time. I started playing music at four so it’s always been a part of my life.

How has the gender gap in the music industry affected you?

Joni:?When I was younger there would be a much larger male audience at clubs for electronic gigs and you would rarely see female producers and DJs. I think that has an impact on how many girls get involved on so many levels; from bookers, performers; across the board, I know it did for me anyway. I was a lot slower coming to the stage even though I wanted to perform and a part of that is a kind of conditioning from what you see as the norm or societal expectation. I’m still working on breaking through that kind of thinking, to be honest. Finding who I am separate from how others perceive women in music.

Katie: ?I don’t think it has, and maybe it has and it hasn’t been so direct. It does seem a bit fishy alright when you look at the lineups for all these festivals and there are a handful of women’s names. I like to think it’s not on purpose anyway because there’s certainly no lack of amazing women musicians in Ireland alone and playing festivals is a great way to get your music out there and if they don’t let us in where can we do that?

There’s a?long-standing bias against women in the music industry that can’t be ignored.

Elaine:?I’ve often been in situations where I’ve been the only woman playing at a gig, but I’m fortunate to say that I’ve always felt encouraged and supported in the field. Sadly I know this is not the case for all women in music. There’s a?long-standing bias against women in the music industry that can’t be ignored. ?It has been really encouraging to see this issue being highlighted recently and even better to see people tackling it head on. Gash Collective, for example, are focused on providing a platform for women involved in electronic music here in Ireland and they’ve recently started delivering workshops around the country in association with This Greedy Pig to encourage and guide people who want to start out in this field.

What advice would you give to young women trying to get into the industry??

Elaine: Make connections. There are some amazing women in the industry here and a wonderfully supportive community.

Katie:?The only advice I have is for all genders. Make it about music. Be interested and you’ll be interesting. Don’t be put off by not knowing enough.

Ailbhe: ?Surround yourself with good people who believe in you, but who are also willing to give you constructive criticism when necessary. Take that criticism in your stride.?Ask for help and guidance, people are always willing to help.

Joni:?There are workshops being run over the summer by Gash Collective in many Irish cities. This would be a great chance to work past the nerves and meet other women who want to do the same while picking up skills. One thing that many other women have empathised with is the fear of making mistakes. I’ve learned that it’s more than okay to make mistakes, it’s essential and the main thing is to just start doing it and keep learning as you go along.

How does Body&Soul differ from other gigs you’ve played?

Elaine: There’s a sort of magic to the festival that you just can’t put your finger on; it has a totally unique identity and spirit and the lineup, installations and experiences are always really fresh and different. It also draws a really nice crowd who are willing to listen to new music and give lesser known acts a chance to shine. That’s one of the many reasons why it’s such a fantastic festival to play at.

Joni: ?Body and Soul is very special. Held at the Summer Solstice which is so deeply a part of Irish heritage, celebrating the height of summer is something I think humans are drawn to. There is something in the air and no better time and place to be. Last year when I played it was one of my favourite gigs. Magic happens in the woods and the audience gives so much; it’s such a celebration.

[Music is] for all genders. Make it about music. Be interested and you’ll be interesting.

Katie:?I feel it’s very artistic and vibey and you’re likely to find an artist or musician, poet or a writer and not just a singer or a DJ playing a laptop live like. It’s a quality over quantity kind of festival to me.


What’s next for you?

Ailbhe: I’ll be playing Glastonbury, Latitude, Cambridge Folk Festival, Another Love Story, Electric Picnic and Head for the Hills festivals this summer. In autumn I’ll be doing another Irish and UK tour. So exciting times ahead!

Katie:?I’ve probably written and recorded about 14 songs since ‘tastemaker’ it’s just diving through them and picking the best ones to do some sort of compilation for me now.

Elaine:?I’m hoping to do a tour later this year, I’m working on another project which you should hear more about soon. I also have a new remix on the way and then I plan to get back to writing. I update my?Facebook page‘regularly,’so you can keep up with me there.

Joni:?Collaborations with The Cyclist, more festivals and I’m hoping to get really stuck into composition and production over the next year. 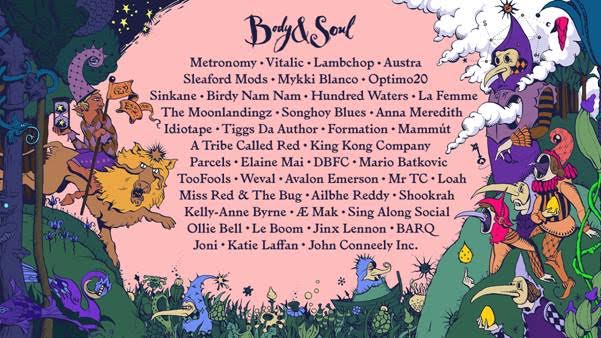 For more information and times on their performances at the festival this weekend, see bodyandsoul.ie?