How Cork-born Laura de Barra is breaking gender stereotypes, one toolbox at a time

Meet the woman who’s doing it for herself. Cork-native Laura de Barra (author of the bestselling book Gaff Goddess), is proof that DIY (or She-IY) can save both money and the planet

Laura de Barra is smashing gender stereotypes out of the water (or out of the toolbox, as the case may be).

Originally from Co Cork, Laura now lives in London where she works as a Portfolio Developer for a property investment company. Day in and day out, she finds herself being called to help tenants with (what should be) simple DIY jobs; from changing lightbulbs to fixing leaky taps, to repairing dishwashers to eradicating moths and mould. Laura is a dab hand at it all – and she’s on a mission to help other people (both men and women) do the same.

Though often viewed by society as a male-only venture – something women ask for help with rather than getting stuck into themselves – Laura says, “DIY is completely genderless”. Her new, light-hearted book, Gaff Goddess, proves that. Whether you’re doing DIY or She-IY, home-maintenance can be fun, and more importantly, cost-effective.

She-IY isn’t pink or ‘for dummies’

“I grew up doing DIY,” Laura tells IMAGE.ie. “I know more women that do DIY than guys, if I’m honest.” The Cork-native says this probably stems from living in London, a society where women just go out and get things done. “Our roles have changed,” she says, “and people have better expectations.

“Before, there was a battle where you were there to make the home look pretty – but you weren’t involved in the function of it. Now, whether you are a guy or girl, the person who’s in the house the most knows the function of the house more. If a person uses the dishwasher all the time, why shouldn’t she know the ins-and-outs of it, instead of just standing back and saying, ‘Oh, it’s broken’?”

Laura says women are smart, switched-on and capable in so many aspects of life, that there’s no reason why we can’t be hands-on in the mechanics of our home too. “I think ‘women can’t do DIY’ was the stereotype, and now the horrible stereotype is that ‘men who can’t do it are useless’ and ‘women who can’t do it never learned’. I wanted to break those,” she says.

She also wants to tackle the perception that women’s DIY (or She-IY) has to be girly and/or dumbed down. “A lot of female DIY is like, ‘Hey girls, this is pink, this is DIY for dummies’ – and I was thinking, ‘where is the DIY for the smart people?’ I didn’t want girls to feel like [my book] was patronising, or pink, or a girly DIY book. I want people to feel like it’s a book for girls and guys to read, one that’s in such good humour that anyone could pick it up and learn something.”

Laura wasn’t always a hands-on DIY-er in the property development trade, having originally studied and worked in fashion. However, realising how damaging fast fashion can be to the environment (with the industry accounting for 10% of all human carbon emissions), Laura decided she needed a change. “You’re designing clothes for somebody’s bin, basically.”

But, upon getting into home maintenance and interiors, she realised this industry was becoming just as bad. From bedsheets to cushion covers, to rugs, sofas and flat-pack furniture, Laura found people had created a sort of ‘throwaway’ culture, whereby everything was being updated or replaced every couple of years.

“We cannot get into the same position with our home and interiors as we did with clothes,” she says. “The change begins with us. I worked in fashion supply for years and we only supplied what the customers wanted; factories only respond to demand.” With that in mind, Laura said it makes more sense for people to look after, repair and maintain the good-quality items they have, rather than splurging on throwaway items that will eventually end up in landfill. “If customers start looking after their homes, we will start getting better quality stuff in the shops,” she says.

When she started styling properties, Laura was surprised by how much money was being spent hiring workers for jobs she could do herself.

“Why are we paying someone do to that?” she would ask. “I was standing around waiting for people, and I thought ‘waste of money’, I’ll do it myself. I love problem-solving anyways.”

She also explained how the thrill of successfully restoring your home is better than any buzz from shopping. “The business model is designed to get your heart racing. While you get a buzz coming home with something new, you can triple that buzz by not spending any money and changing how you feel about your house: zoning it, repairing it… there is no bigger buzz. Walking into your home and feeling in control; setting it up for you and not spending any money; I think that is a bigger thrill. I’d love it if people started to do that more.”

Gaff Goddess by Laura de Barra (published by Penguin) is available to buy online and in stores nationwide now. 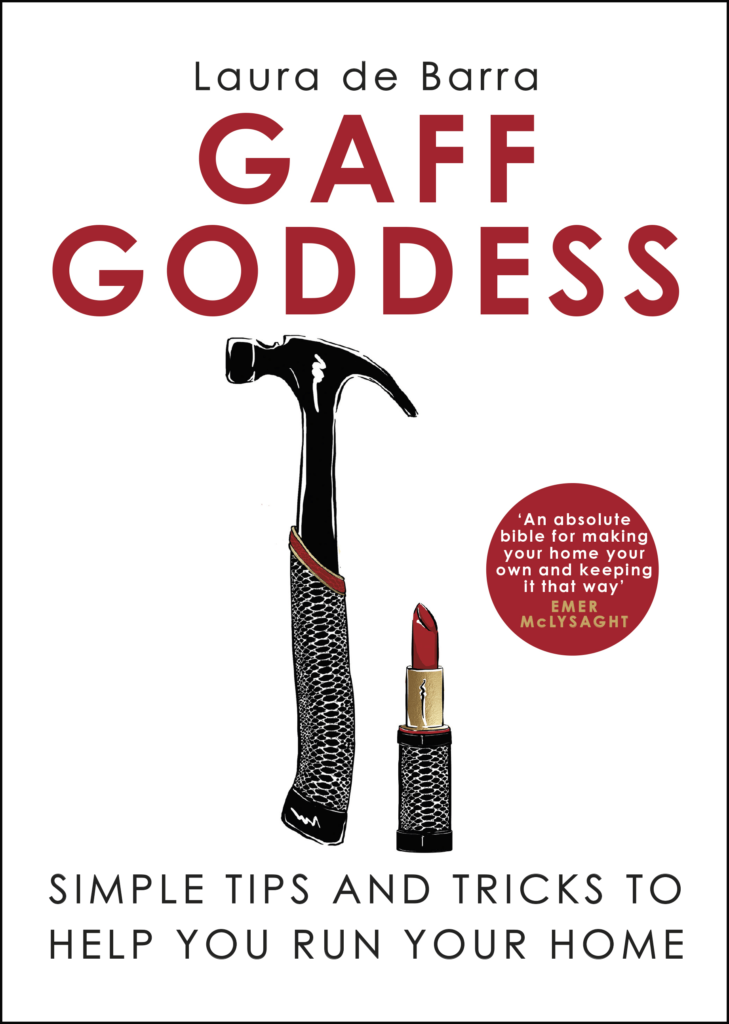 This article first appeared on IMAGE.ie in February 2020.

Read more: How to paint your kitchen cupboards yourself and get the perfect finish

Read more: DIY project: How to upholster like a pro

Read more: ‘Reality check’: What it’s like being a woman in the construction industry

The beauty of Intersex: Asking the questions you’ve been too afraid to ask