Ireland soccer captain Katie McCabe: ‘You are who you are. Be proud of that’

After the success of this year’s women’s World Cup, all eyes are firmly set on the sport.  As Boots Ireland announce a three-year sponsorship with the FAI as partner of the Republic of Ireland Women’s National Team, we sit down with Irish international and team captain Katie McCabe to talk about the future of the sport and why it’s important to embrace who you are.

In light of this year’s World Cup, women’s soccer has never had as many eyes looking at its trajectory.

Spectator numbers, TV audiences, Twitter trends and online commentary were at an all-time high during the record-breaking summer of 2019. It was very good news for anyone interested in women’s sport and even sweeter music to the ears of the athletes who dedicate their lives to the love of the game.

One of these devotees is Dubliner Katie McCabe. The 23-year old Irish international signed for Arsenal in 2015 and has done nothing but impress onlookers ever since.

She was in Dublin this week announcing the three-year sponsorship deal by Boots Ireland with the Football Association of Ireland (FAI) as partner of the Republic of Ireland Women’s National Team. Katie believes having such a big brand as Boots Ireland on board is vital for the future of Irish women’s soccer.

“Ever since it was announced about Boots sponsoring the home nations, they have done a terrific job even over the course of the World Cup. I am just delighted to be a part of the whole launch and they have been really supportive in just trying to grow the women’s game.”

The sponsorship is part of a wider partnership between Boots UK and Ireland and the national women’s teams of the Republic of Ireland, Northern Ireland, England, Scotland and Wales. A key aim of the deal is boosting confidence in women and girls.

Throughout interviews with Irish women sports stars I conducted this summer, I am always interested about hearing who their role models were growing up. There is always one answer: Sonia O’ Sullivan. It’s easy to understand why. She was an Olympic athlete, she was competing in the most prestigious of stages and the media took note. She had visibility and this was vital to become a role model to so many.

“I had to miss out on the parties at the weekend and all of the girls holidays in the summer. But what was important to me was going out on a Sunday.”

For Katie, her passion was stoked by the Arsenal team. This where her hunger to become a professional athlete began. However, it was her father and brother who set the initial flame alight. “So I first started in sports with my brother, he was a few years older than me. A lot of it was just me watching him and his mates play and then him and my dad brought me to a boys football team. It took me a while to get there. I was nervous because I was the only girl playing on a boys football team.” 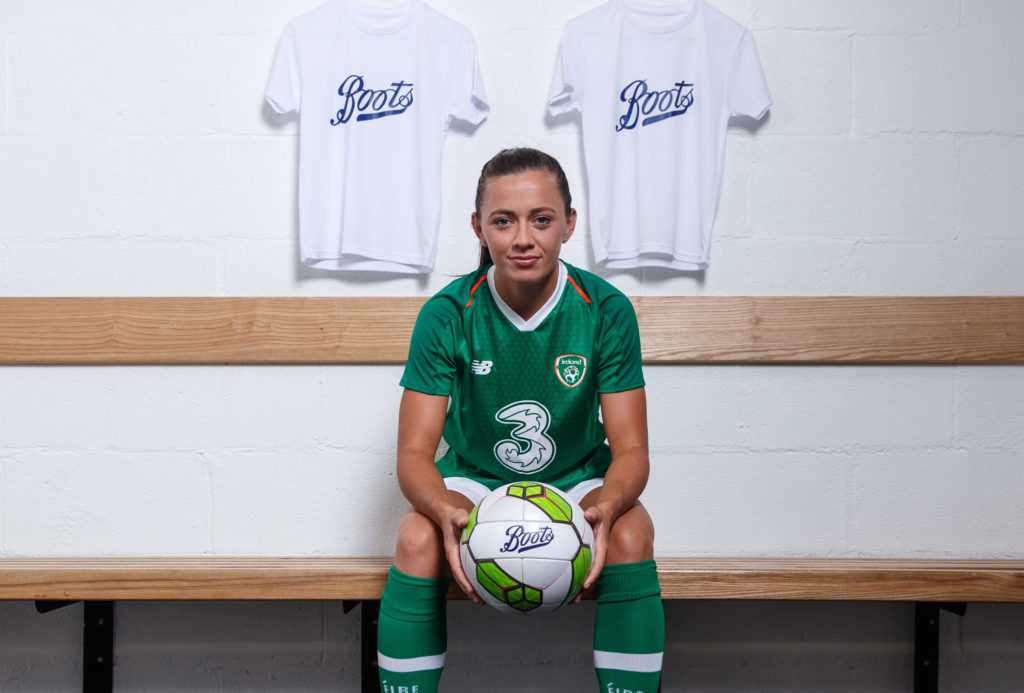 Katie has been playing the sport since she was six. Getting to the level that she is now at doesn’t come without sacrifice, and this is something she was always aware of. “I missed a lot of school growing up due to football and I got a lot of trouble at my feet for it, but I just knew I wanted to do this.

“I had to miss out on the parties at the weekend and all of the girls holidays in the summer. But what was important to me was going out on a Sunday,” she explained.

“Looking back on it now I would never remember a Friday night with the girls. I would rather remember a Sunday winning an All-Ireland or a league cup. All the sacrifices I had to make were definitely worth it.”

Hearing these words is inspiration for getting involved in team sports…even far from the realms of the professional elites. This is backed up by recent research from Boots which found 80% of young women say they feel more confident as a result of playing for their team and 31% of women who play any sports feel happier and 45% feel healthier.

With initiatives such as the 20×20 campaign, there has never been a greater push towards equal coverage and interest in both men’s and women’s sport. Part of the objectives of 20×20 is inspiring youth involvement by enabling girls to see other girls – and women – involved in sports. “If she can’t see it, she can’t be it” is the slogan we can relate to across our lives.

“Seeing now that girls can make a career out of it is so important for girls.”

“I was obviously young playing in boys teams and I wanted to play with the girls,” reflects Katie. “I was like ‘why don’t you want to play football?’ To see my sister now playing on the girl’s team and enjoying it with her friends is just so important.”

She is very aware of her own visibility as a professional athlete and the power of influence. “Seeing now that girls can make a career out of it is so important for girls. Even for my little sister to see her older sister making a career out of what she loves. That then inspires her to work hard and work towards that goal.”

Inequality is rife in sports between the sexes but she believes that the gap is slowly but surely closing, speaking at length of the importance of this summer’s World Cup which saw record numbers of viewers. Nevertheless, despite this success, she believes the power lies in the grassroots. “Starting young, putting that coaching in early and I know the FAI do a terrific job of that already. It starts with the young guys growing up and keeping them at it.”

What’s the biggest lesson sport has taught her? “To never give up. To be fearless and to believe in yourself and what you are doing,” she says.

This is something she has applied to other areas in her life outside of sport. Speaking at the launch of Aviva’s Dublin Pride recently, Katie talked about her relationship with teammate Ruesha Littlejohn. She is an active ambassador of the LGBT community and I wondered if the sports industry is an inclusive space to be in. “I can only answer for the women’s game, but it has been so accepting and any team I have played on – no matter who you are – you are accepted and not just your sexuality.”

For young girls struggling to accept their sexuality, Katie encourages them to talk. “You are never alone. I know I have felt like that in the past, but the minute I opened up and spoke to my mom or my sister, the weight would be lifted off my shoulder.”

“Speak to someone you know and trust. Don’t be afraid to be who you are. You are who are you and be proud of that.”

“It does make a big difference, I would love to see stadiums fill out like they do for the men’s.”

To continue the rollercoaster ride that women’s football is one, Katie believes the fans are vital. Research by Boots found only 7% of the population of Ireland have attended a live women’s sporting event, but more positively  it found 71% believe people should attend women’s sporting events to show their support.

Katie emphasises the importance of the supposed 12th (wo)man, saying: “It does make a big difference, I would love to see stadiums fill out like they do for the men’s.”

Next for Katie is the kick-off of the WSL season with Arsenal with whom she hopes will be able to compete in the Champions League. Then there is the task of the UEFA Women’s Championship qualifiers which kick off this September as Ireland play Montenegro.

Something tells me these won’t be a struggle for Katie and that the future of Irish football is in very safe, capable and talented hands.

Watch:: Simone Biles makes history at the US Gymnastics Championships